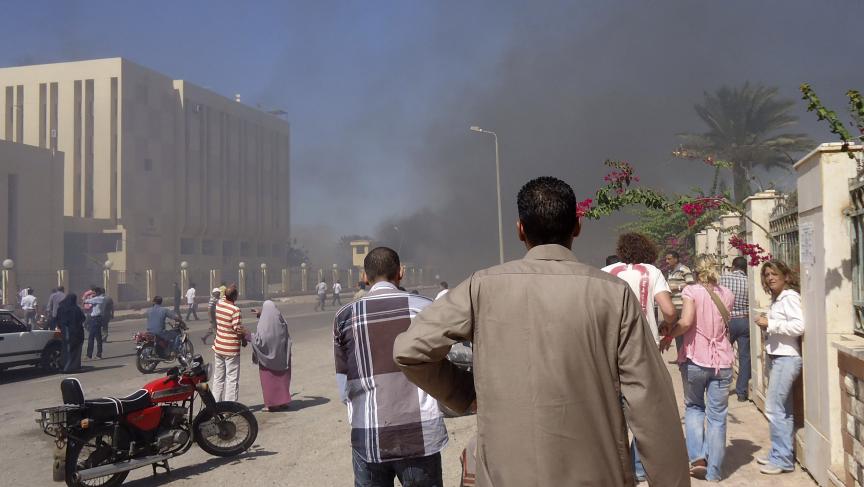 Residents and tourists watch as smoke rises from a state security building in the Sinai after a car bomb blast. Medical sources said three were killed and 48 injured in the attack.

Insurgent-style attacks are growing in many parts of Egypt.

Today, a car bomb destroyed a security building in the normally quiet southern part of the Sinai peninsula, killing three and injuring about fifty. Militants also ambushed a convoy of government troops near the only bridge over the Suez Canal, killing six soldiers. And in Cairo itself, a rocket-propelled grenade damaged a satellite dish belonging to state television, while troops were engaged in a gun battle near the pyramids at sunrise.

"It's not clear if these [attacks] are related to each other, or even to the violence in Cairo yesterday," says Abigail Hauslohner, Cairo bureau chief for the Washington Post.

"There are competing narratives in Egypt right now," says Hauslohner, with the government blaming the Muslim Brotherhood and supporters of Mohammed Morsi for the violence and terrorism, although so far there's no evidence to support that. However, she adds, "What does seem very likely is that there are Islamist militants behind many of these attacks, including perhaps the attacks today."

The Muslim Brotherhood insists it is a non-violent organization, having renounced violence decades ago.

Brotherhood officials have said that the military can't topple a democratically elected government without expecting a popular backlash. "Brotherhood leaders," says Hauslohner, "have increasingly said that they don't have control any more over their supporters out on the street, and that this protest movement has taken on its own identity." Hauslohner says she has observed that herself.

That's no comfort to Brotherhood critics.  One woman in Cairo yesterday, who was on the street to celebrate the army's role in toppling Morsi, said the opposition protesters were not Egyptian and "should be executed."  Hauslohner says that view is a common one.