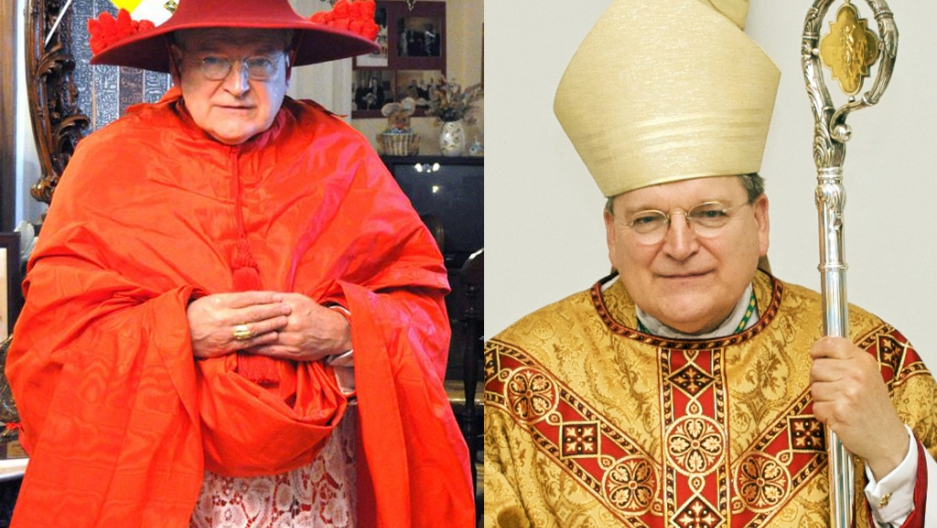 In trying to live up to Jesus’s message about solidarity with the poor, Pope Francis has called for a church geared to social justice. This pope wants church officials to live more modestly.

As he told newly-named bishops in Rome on Sept. 19, according to The Tablet, “We pastors must not be men with a ‘princely mindset.’”

But try telling that to Cardinal Raymond Burke, the chief judge of the Vatican’s supreme court.

The fruits of high officialdom come naturally to Cardinal Raymond Burke, an American, as found in photographs that show him in lavish procession with a train of watered silk, wearing fine scarlet gloves and jeweled red hats, suggesting nobility.

Graphic: Dressed to excess: the cost of a cardinal's clothes

Many of these photos appear on the website of the ultra-orthodox group Burke has championed, the Institute of Christ the King Sovereign Priest, which promotes Latin Mass and a return to a traditional, pre-Vatican II religious life. In a blistering interview posted on a more obscure Catholic website, Burke calls gay marriage the work of Satan and the Obama administration “totalitarian” for its support of gay marriage and the Affordable Care Act, which covers contraceptives.

Cardinal Burke, who made his remarks several weeks before the government shutdown, is often clad in the sumptuous attire of a Prince of the Church, as cardinals are called. Francis seemed to have ornamental practices in mind when he said in an interview with La Repubblica published this week: "Heads of the church have often been narcissists, flattered and thrilled by their courtiers."

Such remarks, and the pope's widely quoted comment about a gay priest, “who am I to judge?” in a July press conference have sent shock waves to traditionalist Catholics, who see the rituals of ecclesiastical splendor as signs of a church in keeping with its past.

To the church's conservative wing, Francis's recent interview with the Jesuit-edited Vatican journal, La Civilta Cattolica, in which he endorsed greater internal tolerance and less obsession with abortion and birth control, suggest a retreat for doctrinal unity.

Although he has made no move to change Catholic moral teaching, Francis is addressing a church as divided as Western electorates on politics-of-the body, save for birth control, which 90 percent of Catholics support. Francis’s realism on church divisions stems from a strategy to repair the Vatican’s scandal-battered image, and to try to win back millions of disaffected Catholics to a “big tent” idea of church.

He went further, in the interview with La Repubblica in Rome, saying: “The court is the leprosy of the papacy."

But will the pope's biting rhetoric mean fundamental changes in the Vatican, where cardinals are accustomed to being called, "Your Eminence" or "His Grace," as an assistant to Burke once referred to him while explaining that the cardinal was away?

"I am not giving interviews at this time, " Burke told GlobalPost, when reached by telephone at the Vatican. “God bless,” he added.

The former archbishop of St. Louis, Cardinal Burke as a canon lawyer found favor with John Paul and Benedict. As Prefect of the Supreme Tribunal of the Apostolic Signatura, he oversees the Vatican’s highest appellate court. Like many figures in the curia, or Vatican administration, Burke occupies interim status until Francis decides on all the prefects he will re-appoint or move out.

In an interview with Catholic Servant, a small Minneapolis paper, posted on the website of the ultra-orthodox Wanderer, Burke says that a Minnesota gay marriage law “ought to awaken all of us and frighten us with regard to the future of our nation. This is a work of deceit, a lie about the most fundamental aspect of our human nature, our human sexuality, which after life itself defines us. There is only one place these types of lies come from, namely Satan. It is a diabolical situation.”

“The present government,” continued Burke, referring to the Obama administration, “can be described in no other way than totalitarian.” He predicted that “persecutions will follow. It will not be possible for Catholics to exercise most of the normal human services whether in health care, education or social welfare because in conscience they will no longer be able to do what the government demands: to cooperate in grave moral evil.”

Burke calls the Affordable Care Act “an intolerable situation" because it covers contraceptives.

"Yes, it can be turned back — we are a democracy,” he said. “A government like ours can and must be stopped in what it is doing.”

Burke’s opinion blasts have long given him cache with Catholic conservatives. He was a major force with Cardinal Bernard Law – who resigned as Boston archbishop in the 2002 abuse scandal – in pushing the Vatican investigation of the Leadership Conference of Women Religious, the main group of superiors of American nuns. He has insisted that pro-choice Catholic elected officials be denied holy communion.

Burke’s persona of ecclesiastical privilege, cultivated in the pomp of traditionalist ceremonies, as in a procession with nuns in Switzerland, forms a rococo contrast with the self-restrained style of Pope Francis. As Cardinal Jorge Mario Bergoglio, he took a bus to work and made frequent visits to the slums of Buenos Aires.

"The vestments, everything, are part of a tradition," Burke told Religion News Service last year. "We need to understand that and not just discard it and say, well, it was all just an ugly accretion."

More from GlobalPost: American nuns gather in Florida with a minder in their midst

“Pope Benedict loved the old courtly model, the traditional finery which gave a lot of these men permission to dress as they have,” said Schenk. “In photographs of a cardinal followed by a 20-foot train, you see six people holding the cloth and some carry fans made from ostrich feathers. These cardinals think it’s a way of giving honor to the office. But to ordinary people it comes across as silly or a lavish display that’s self-referential, narcissistic and completely unrelated to Jesus of Nazareth who had no place to lay his head. It’s a big turnoff to many Vatican II Catholics.”

Whether the pope will replace Burke as prefect of the Signatura is one of many questions buzzing in the Vatican as Francis methodically goes about putting his own appointments in place, in keeping with the changes common to any new papacy.

Ironically, Burke has ruled against several American bishops in Signatura cases that reversed parish closure decisions, in which bishops sought to shutter and sell churches because of financial pressures on their dioceses. An American parish has closed, on average, once a week for the last fifteen years.

“Cardinal Burke has also signed some decrees which, while upholding the bishops’ closure of parishes, have important language safeguarding the churches as Catholic worship sites,” Peter Borré of Boston, a leader of Council of Parishes, a national group that has filed numerous Vatican appeals to halt closures, told GlobalPost.

“Although canon law still gives almost unlimited authority to bishops when it comes to shutting down parishes, Burke takes seriously the need to protect the churches as spiritual infrastructure, by limiting the bishops' destruction of churches through deconsecration and subsequent sales for secular use,” said Borré.

Jason Berry writes on religion for GlobalPost and is author of Render Unto Rome: The Secret Life of Money in the Catholic Church.