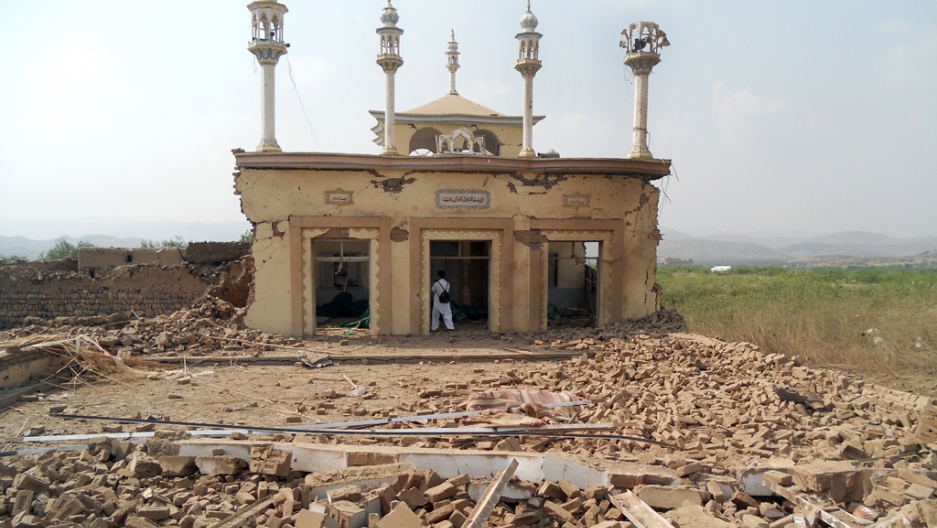 Editor’s note: The story below was published on Oct. 6 2013. On Dec. 16, 2014, the Pakistani Taliban claimed responsibility for an attack on a military-run school in Peshawar that killed more than 100 people, most of them young students. It’s the bloodiest assault in Pakistan in years. “The government is targeting our families and females,” a Taliban spokesman said. “We want them to feel the pain.”
Follow GlobalPost’s live blog for news.

BUZZARDS BAY, Mass. — The explosion of violence in Pakistan over the past week has killed more than 100 people and, at least for now, derailed any hope that peace talks between the beleaguered government of Prime Minister Nawaz Sharif and the Pakistani Taliban might provide some relief.

Sharif has repeatedly expressed a willingness to engage in dialogue with the militants, provided they refrain from violence. Pakistan’s powerful military, however, is much more skittish in the wake of recent attacks.

The militants themselves are not all that keen; the Tehrik-i-Taliban Pakistan, or TTP, the umbrella group of militants known as the Pakistani Taliban, has rejected any preconditions.

“By telling us that we will have to lay down arms and respect the constitution, the prime minister, Nawaz Sharif, showed that he is following the policy of America and its allies,” TTP spokesman Shahidullah Shahd recently told a Pakistani magazine.

But even if some of the initial hurdles could be overcome, it’s far from clear who would have to be brought into any talks. There are so many different militant groups in Pakistan. Experts aren't even sure how many there are.

The origins of the Pakistani Taliban are closely tied to their Afghan brothers. During the anti-Soviet jihad, fighters from Pakistan spilled across the border to help drive out the foreigners, and history repeated itself following the US-led invasion of 2001.

By 2002 there were enough militants in Pakistan’s border areas that the government felt compelled to try and establish some form of control, which only forced the fighters to coalesce.

“Supporters of the Afghan Taliban in the tribal areas transitioned into a mainstream Taliban force of their own as a reaction to the Pakistani army's incursion into the tribal areas, which began in 2002, to hunt down militants,” the Council on Foreign Relations writes.

“In December 2007, about 13 disparate militant groups coalesced under the umbrella of Tehrik-i-Taliban Pakistan (TTP) … with militant commander Baitullah Mehsud from South Waziristan as the leader.”

The Pakistani Taliban was, from the outset, ideologically quite different from its Afghan colleagues. For one thing, it’s much more closely tied to Al Qaeda than the notoriously xenophobic Afghans.

In an interview in 2010, a former high-level Afghan Taliban leader told GlobalPost: “You should have let us deal with Al Qaeda. We hate them more than you do.”

The same is not true of Pakistan’s militants.

“An important characteristic of the Pakistani Taliban is their alliance with Al Qaeda, including personal relations dating back to the days of the Soviet-Afghan war,” writes Shehzad Qazi, of the Institute for Social Policy and Understanding, a Detroit-based think tank.

“The Taliban have provided shelter to Al Qaeda leaders, been operationally active with it, and most recently vowed to avenge the killing of Osama bin Laden.”

The Pakistani Taliban’s main focus has been its antipathy to the Pakistani state; the TTP is believed to have been behind the assassination of Prime Minister Benazir Bhutto in December 2007, and bombings in Islamabad, Lahore and elsewhere.

The TTP is also blamed for the attack on Malala Yousafzai, a teenaged Pakistani blogger who advocates for girls’ education. She was shot in the head in October 2012, on her way home from school.

But the group has ambitions far beyond Pakistan’s borders.

The failed attempt to bomb New York’s Times Square in May 2010 was carried out by Faisal Shahzad, a Pakistani-American who said the TTP had trained him. This led the US State Department to classify the TTP as a “foreign terrorist organization” that September.

The Pakistani Taliban is also sending fighters to Syria. They’re helping the opposition in its bid to unseat Syrian President Bashar al-Assad, who has been waging a brutal war against them for two and a half years.

According to a Reuters report, the TTP is hoping to cement ties with Al Qaeda by helping out their affiliates in the Middle East.

But parts of the Pakistani Taliban reserve their special ire for India. One particular TTP group, Lashkar-e-Taiba (LeT), was behind the Mumbai attacks in 2008 that left more than 150 dead.

LeT has also been blamed for a series of attacks against Indian targets inside Afghanistan, including the bombing of the Indian Embassy in 2008 and 2009, in which 75 people died, as well as the 2010 bombing of a guest house in Kabul that served Indian workers.

The TTP was decapitated in 2009, when a US drone strike killed its leader, Baitullah Mehsud. His cousin and deputy, Hakimullah Mehsud, took over, but according to many reports, a power struggle led to the organization fracturing still further, generating more subgroups.

"The government also does not know the exact number of [militant groups in Pakistan]," Rahimullah Yousafzai, a Pakistani journalist who specializes in covering militants, told Radio Free Europe.

"Sometimes we hear that there are 70 or 80 groups. Some even say there are around 100 militant groups in Pakistan. But none of these numbers or information is completely accurate."

The problem is acute for a government that’s actively seeking a peace deal, in part to be able to proceed with plans for a gas pipeline from Iran to Pakistan.

The deal is in flagrant violation of US sanctions on Tehran, and the prime minister is worried that US drone strikes will make any peace agreement with the militants impossible.

The US drone program is highly unpopular within Pakistan; revenge for Muslims killed in drone strikes is one of the main reasons cited in recent militant attacks.

In his address to the UN General Assembly last week, Sharif urged the United States to back off.

"The use of armed drones in the border areas of Pakistan is a continued violation of our territorial integrity,” he said. “It results in casualties of innocent civilians and is detrimental to our resolve and efforts to eliminate extremism and terrorism from Pakistan.”

The drone program, however, enjoys broad support at home, where the prospect of taking out “bad guys” without risking American lives is very appealing.

But the strikes can provoke a backlash, said Bruce Hoffman, terrorism expert at Georgetown University. As the Times Square incident attests, TTP and its affiliates may seek to mount an attack on US soil.

“The message may be, ‘The US is pounding us with drone attacks, but we’re powerful enough to strike back,’” Hoffman said in an interview with The New York Times.

According to Denis McDonough, the White House chief of staff, the Times Square attempted bombing shows that the United States and Pakistan face a common enemy.

Editor's note: This is part of a two-part series called Know your Taliban. Click here for part one, Who bombed Pakistan's Christians?