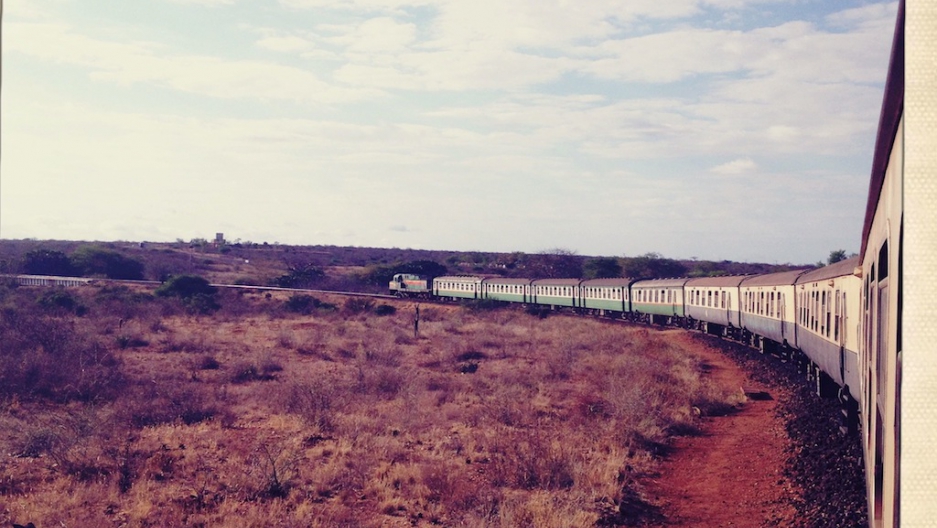 NAIROBI, Kenya — Were it not for a single, narrow-gauge railway track built more than a century ago, it’s fair to say modern Kenya as we know it wouldn’t exist.

The idea of a massive rail project was considered so crazy back in 1896, when British colonizers began work on the track, that it was nicknamed the "Lunatic Line."

It stretched 660 miles, from the port of Mombasa on the Indian Ocean to Kisumu on Lake Victoria, and cost the lives of 2,500 workers: most succumbed to disease as they toiled, while some were eaten by lions.

Winston Churchill, Britain’s wartime prime minister, described the construction of the Lunatic Line as “one of the finest expositions of the British art of muddling through.” But once completed in 1901, it attracted high-class passengers, including former US President Theodore Roosevelt, who rode the train at a time when silver service was the order of the day, with cut-glass and bone china tableware.

Most importantly, the Lunatic Line opened up the East African interior, connecting it to the coast, the port and the world, kick-starting international trade. Nairobi, once a temperate half-way house on a high plateau, quickly transformed from sleepy way station to bustling trading center to, by late in the century, a capital city of 3 million people.

New rolling stock — the equipment used for transport — was brought in until the 1980s. But under President Daniel Arap Moi's rule, the railway suffered from mismanagement, lack of investment and, like many other parastatals, plunder and corruption.

Today the railway that gave birth to Kenya is dilapidated and scheduled for replacement, a symbol of the rest of the country’s crumbling and inadequate infrastructure. Most goods imported into East Africa are shipped into Mombasa — Kenya’s busy port city that is both gateway and bottleneck — and then transported by truck along a slow, single-lane highway that stretches all the way to Uganda, Rwanda, Burundi and eastern DR Congo.

A new rail line, which is due to begin construction later this year, will doubtless be more efficient — but with the demise of the Lunatic Line, East Africa will have lost a key part of its history and heritage.

“We are entering the last days of this train,” said one railway worker with nearly three decades of service. “It is very sad.”

Reflecting a 21st century economic landscape, the new line will be built by China. The aims of boosting the economy and opening up access to Kenya and the East African interior, however, are fundamentally the same as a century ago.

The railway is a key part of $5 billion worth of energy and infrastructure investments announced during a state visit to China by President Uhuru Kenyatta in August, during his first overseas trip since taking office earlier in the year.

“We welcome the investment in key sectors of our economy,” Kenyatta said after his Chinese counterpart, President Xi Jinping, announced the deals. “The rail link, particularly, is important in the context of East Africa’s shared goal of ensuring quicker movement of peoples, goods and services.”

A spokesman for the line’s current operator, Rift Valley Railways, declined to comment for this story. Employees working on the train did not want to be identified for fear of losing their jobs.

A trip on the existing train is proof enough of its need for replacement after decades of neglect.

Only 700 of the original 1,700 miles of track are still operational. The rolling stock is decrepit, with many of the engines broken down and more than half the stations along the one functioning line closed. Cargo trains are given priority on the solitary track, meaning the passenger train regularly pulls into the sidings to wait while the other passes.

The passenger train’s top speed is a sedate 44 miles per hour, but it frequently drops to less than 20 miles per hour. The 330-mile journey from Nairobi to Mombasa is scheduled to take 15 hours, and often takes longer on the return, which is uphill. Children who like to run alongside the train shouting and waving at some points seem to be overtaking.

Nor is the train great value for the money. A first class ticket including a bed in a shared cabin, dinner and breakfast costs $50, roughly half the price of the one-hour flight between Nairobi and Mombasa. A third class ticket will get you a wooden seat for $8, only slightly cheaper than the eight-hour bus ride you could take instead.

It’s little surprise then that cash-poor, time-rich Kenyans and adventure-hungry foreign tourists are the main people who use the train nowadays. “It’s not economic for the wananchi,” said one railway worker, using a Swahili term meaning “ordinary folk.”

“And it takes too long,” he added.

As a method of getting from point A to point B, the train is comprehensively outdated — but therein lies its charm, if you can appreciate it.

Nairobi Station is an aging red-brick building with a series of pitched metal roofs. Wooden signs hang from iron brackets — “Upper Class Booking and Ticketing Office,” reads one, “Station Master,” another — and analog clocks are fixed to the rafters above platforms dotted with wooden benches.

There’s little regard for rail safety: passengers wander across the tracks rather than use the underpass, and leap onto the moving commuter trains as they pull out of the station.

The last to leave three times a week is the “Mombasa Line.” On a recent Monday it was an hour late to depart. A full 18 hours later, it crawled into Mombasa.

A steward signaled dinner time by walking up and down the narrow cabin corridors, ringing a bell. Waitstaff in fraying black and white uniforms did valiant battle with the rocking, bouncing carriage as they ladled soup into bowls and coffee into cups.

In the clammy Restaurant Carriage, none of the dozen small ceiling fans worked, and plug-in fluorescent strip lights had been rigged up in place of the original, defunct fittings. The burnt orange faux-leather upholstery was shiny with age.

But at least the train travels through Tsavo National Park — a bonus, according to one railway worker. “It took 20 hours from Mombasa to Nairobi the other day, but it was nice, we saw lots of animals,” he said.

This story was reported between Nairobi and Mombasa, Kenya. All photographs by Tristan McConnell.