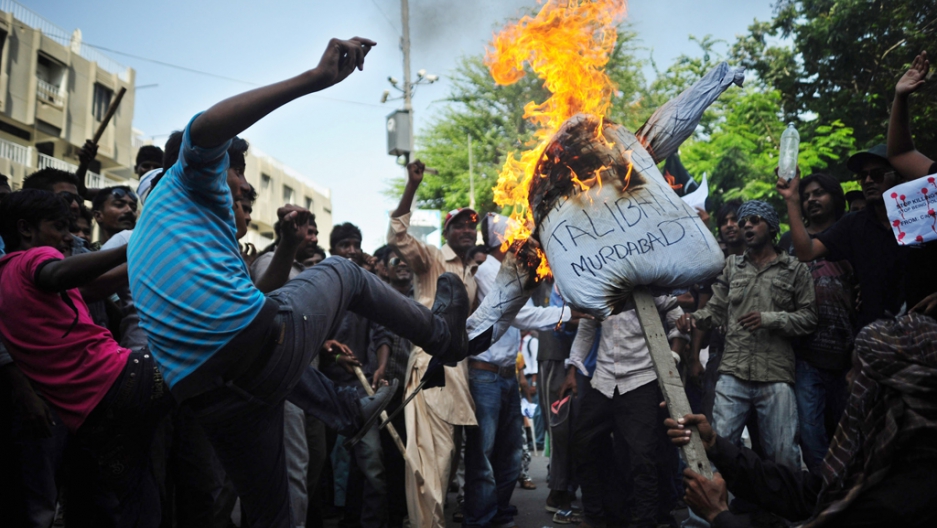 Pakistani Christians burn an effigy of the Taliban during a protest in Karachi on Sept. 23, 2013, in reaction to bomb attacks at a church in Peshawar.
Credit: Asif Hassan
Share

Editor's note: This is part of a two-part series called Know your Taliban. Click here for part two, Who are the Pakistani Taliban?

BUZZARDS BAY, Mass. — A Christian church, a crowded market, a bus full of government employees — these are some of the latest targets in Pakistan’s increasingly violent domestic war, which pits diverse militant groups against a government that seems powerless to rein them in.

On Thursday, militants attacked a rival group in northwest Pakistan, killing more than a dozen people.

Most of the assaults are attributed to “the Taliban,” although that term covers a multitude of sins in the Afghan-Pakistan corridor.

A militant group calling itself Jundullah, meaning Soldiers of God, claimed responsibility for the attack on the Christian church in Peshawar on Sept. 22, which killed at least 85. Jundullah says the bombing was payback for Muslims killed in the US drone war — a continuing source of anger in Pakistan.

Jundullah is thought to be one of dozens of splinter groups under the umbrella of the Tehrik-i-Taliban Pakistan, or TTP, the organization generally known as the Pakistani Taliban.

But TTP disavowed Jundullah, saying that the alleged bombers had no links to the Taliban.

TTP has also distanced itself from the market attack on Monday, which killed at least 42 and injured more than 100.

Given the current state of militancy in Pakistan, which has seen a proliferation of myriad groups with similar names and overlapping goals, it may be all but impossible to tell, with any degree of certainty, whether Jundullah is part of the Taliban network.

Even less certain is what the Pakistani government can or is willing to do to stop the violence. After all, it was the country’s powerful Inter-Services Intelligence organization, the ISI, that provided the support that gave the Taliban its start.

As noted journalist and author James Fergusson told Radio Free Europe,
“There is a very good expression in that part of the world that when the ISI created the Taliban they created a tiger — the question is whether they have the tiger by the head or by the tail.”

The rise and fall (and rise?) of the Afghan Taliban

The word “Taliban” conjures up the bearded, black-turbaned militants who swept to power in Afghanistan in 1996. They imposed a brutal regime that confined women to their homes, kept girls from schools, forced men into the mosques to pray five times a day and blew up the Bamiyan Buddhas.

They had cut their fighting teeth during the anti-Soviet jihad, generously supported, along with other mujahedeen groups, by the United States and Pakistan.

Once the Soviets left, in 1989, and Afghanistan descended into civil war, the ISI maintained its links with the group of religious students known as the Taliban as they battled the warlords who were tearing the country apart.

Pakistan’s calculus was simple: They wanted to have a regime in place they could deal with or even, perhaps, control.

“Elements of Pakistan's intelligence agency … provided the Taliban with advisers and materials in their battles with rival warlords, ensuring a friendly government that controlled most of Afghanistan,” according to a report published by the Council on Foreign Relations in 2008.

The Taliban were chased out of Kabul by the US invasion in October 2001, as Washington sought to punish the Afghan regime for harboring Al Qaeda chief Osama bin Laden, in the wake of the 9/11 attacks.

But they did not stay gone; by 2005 they had mounted a robust insurgency that continues to this day.

The Afghan Taliban is largely a nationalist organization focused on driving out the foreign armies and regaining power. It still enjoys fairly good relations with Pakistan, something that makes the US unhappy.

Taliban leader Mullah Omar and his closest advisers are almost certainly living in Pakistan. They are referred to as the “Quetta shura,” after the Pakistani town where they’re believed to be based.

Pakistan is a major recipient of US aid, and is seen as a major ally in the fight against terrorism.

The Congressional Research Service says, since 1984, the US government has pledged more than $30 billion in direct aid to the country. About half of that’s been for military assistance, and more than two-thirds of it appropriated after 2001.

Given this perceived partnership, Washington would like for Islamabad to be a little less hospitable to fighters who are making life difficult for US and allied soldiers in Afghanistan.

This is especially true of the Haqqani network, a group of Afghan militants loosely allied with the Taliban, under the leadership of Jalaluddin Haqqani and his son Sirajuddin. The network is believed to be responsible for some of the most daring and high-profile attacks in Kabul, including the storming of the Serena Hotel in 2008 that killed six.

The Haqqanis are close to Pakistan’s government, which has resisted calls to go after the militants within its borders, US officials say.

“It’s fairly well known that the … Inter-Services Intelligence agency has had a long relationship with the Haqqani network,” former Joint Chiefs Chairman Adm. Mike Mullen told a Pakistani newspaper during a visit in 2011. “Addressing the network is, from my perspective, critical to the solution set in Afghanistan.”

The Afghan Taliban members share their Pashtun ethnicity with their Pakistani brothers-in-arms. Both groups are overwhelmingly Sunni Muslim. Both are hostile to foreigners and neither is overly sympathetic to the Shia sect of Islam.

But there the similarity ends. It is, in fact, quite misleading that the Pakistani militants, who arose later and have a very different worldview, call themselves “Taliban.”

“The fact that they have the same name causes all kinds of confusion,” Gilles Dorronsoro, a French scholar of South Asia at the Carnegie Endowment for International Peace in Washington, said in a New York Times interview.

In fact, says writer and researcher Alex Strick van Linschoten, who has lived among the Taliban fighters in the southern Afghan city of Kandahar, the name is about all they share.

“To be honest, the Taliban commanders and groups on the ground in Afghanistan couldn’t care less what’s happening to their Pakistani brothers across the border,” he said.