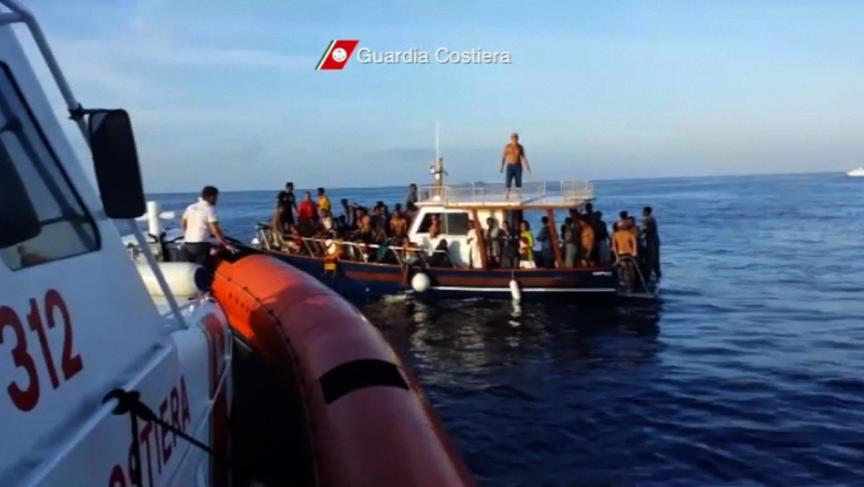 A still image taken from video released by the Italian Coast Guard shows migrants rescued from the water off the southern Italian island of Lampedusa on Thursday, October 3, 2013.

It's almost impossible to imagine the huge risks that many migrants take to try and flee poverty and war. Many die trying. It happens along the US-Mexico border, but also in the Mediterranean -as we were reminded this week.

A boat carrying about 500 African migrants caught fire and sank near the Italian island of Lampedusa. More than 300 are dead or still missing. An Italian coast guard officer says the sea is “full of bodies.”

This story is all too familiar for the BBC's Kassim Kayira. Years ago, he attempted to make the same journey, as part of a documentary called "Breaking into Britain.”

He wanted to know why Africans risk so much to cross the Mediterranean. The first thing he learned was that migrants risk their money -$2,500 to $6,000 - just for the chance to take their risks on the boat. Money doesn't guarantee a safe journey. Migrants share a huge desire to make it out of poverty. Desire… and luck.

So where does that desire come from?

Kayira says it comes, mostly, from circumstance. Many who take the trip are surprisingly well educated. He met doctors, electrical engineers and accountants. They felt frustrated after years being unemployed in their home countries. Many felt like their parents made an investment in their lives. Many felt the need to repay that investment.

“Some would even prefer to die than to be forced to return home,” he says.

This sad story, says Kayira, might have a happy ending for those who didn't drown this week. The few migrants who have been saved may actually gain a better life. They may not be sent back to their home countries. And, if true, it might be due to the sacrifice of their fellow travelers and the international attention the tragedy has generated. Their deaths could grant the survivors safe passage to Europe.

“And that will mean the next group is just getting ready,” Kayira says. “As we are talking, another boat might be setting off.”