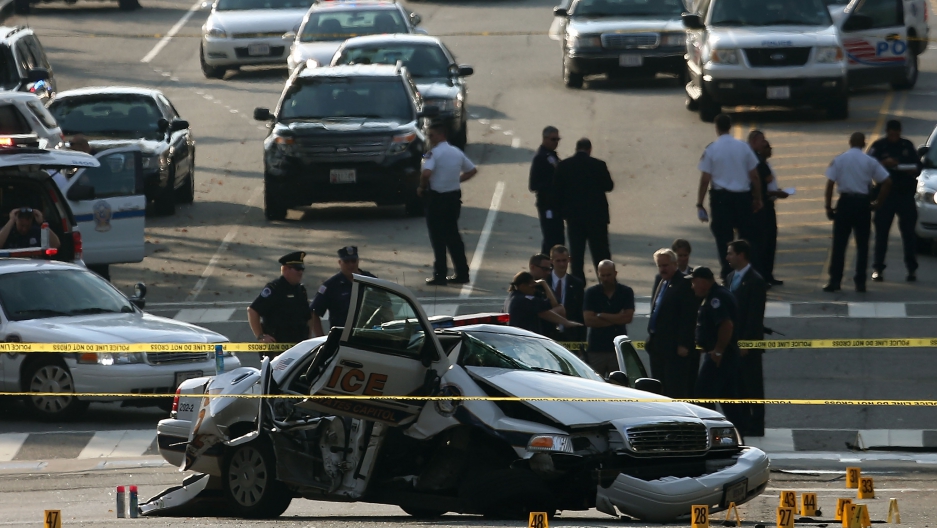 Law enforcement personnel gather around a police vehicle that was involved in an incident with another vehicle on Constitution Avenue outside the U.S. Capitol October 3, 2013 in Washington, DC.
Credit: Mark Wilson
Share

Just two weeks after an armed suspect killed 12 people at the Washington Navy Yard, the capital once again experienced a lockdown Thursday, with a "shelter in place" issued for the US Capitol.

The incident began in the midst of a government shutdown, while Congressional lawmakers debated how to exit partisan gridlock.

A woman, later identified as 34-year-old Miriam Carey of Stamford, Conn., drove a black Infiniti sedan into a security fence outside the White House.

She led police on a chase as she sped towards the Capitol building, where officers opened fire.

Authorities said Carey had an 18-month-old girl, believed to be her daughter, in the car with her during the incident.

"What occurred next was not clear. Ms. Carey managed to get out of the car, and was shot by several officers. According to a law enforcement official, she was not armed, and it was not known whether she presented an immediate danger."

The chase ended with Carey dead, two officers injured (not shot), and the child unharmed.

A dentist Carey reportedly worked for until August 2012 told NBC's Connecticut affiliate that she "appeared increasingly stressed after an unplanned pregnancy." Relatives said Carey may have suffered from postpartum depression.

A law enforcement official said Friday that Carey's mental health had been deteriorating for months, and she believed President Barack Obama had communicated with her.

"We are seeing serious degradation in her mental health, certainly within the last 10 months, since December, ups and downs," the official told the Associated Press, speaking anonymously. "Our working theory is her mental health was a significant driver in her unexpected presence in DC yesterday."

A full portrait of Carey is still emerging, but a longtime friend said she was a "catch," while her neighbor called her "pleasant" and "very happy with her daughter."

High costs and attitudes toward mental health present obstacles to adequate care in the United States.

According to statistics released by the Bureau of Labor in 2010, access to mental health professionals in America is worse than access to other types of doctors.

It's also more expensive than other health care, with The Washington Post citing a survey that found the majority of those who sought outpatient treatment had to pay between $100 to $5,000.

According to the National Alliance on Mental Illness, the recession led to states cutting $1.8 billion from their mental health budgets.