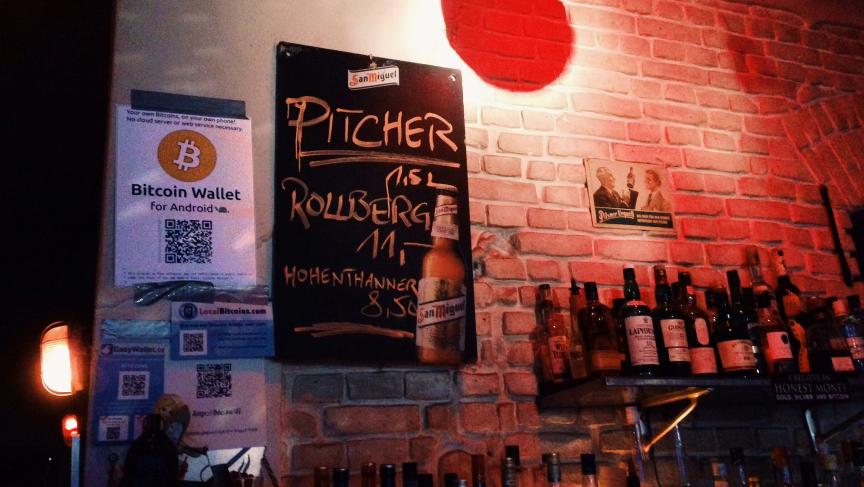 Behind the bar at Room 77 a sign announces that clients can pay for their beers in Bitcoin.

Walk into a bar in Berlin - for example, a trendy one called Room 77 - and try paying with a credit card. It’s not gonna happen.

The owner doesn't allow it. “For a biz person of this size with 5 to 10% profit margins,” says owner Joerg Platzer, “giving 3% of that to Mastercard?  It makes it a no-go.”

Platzer says his patrons either pay cash or they light up their virtual wallets on their smartphones, and pay in bitcoins - or fractions of bitcoins, depending on the exchange rate.  Crypto-currencies get Platzer really excited. And he dreams big. Platzer is looking forward to bitcoins ushering in an entirely new economic system.

A bitcoin is a kind of computer currency. It's becoming increasingly more accepted in markets around the world, and its value is based upon how many people invest in having bitcoins. The more people who want bitcoins, the higher the demand and the more a single bitcoin is worth. Unlike any other form of currency, the value of a bitcoin has never been tied to a physical object, like a piece of gold.

Bar owner Platzer isn’t the only one who's getting excited about bitcoins, especially in this part of Berlin.

Numerous restaurants and stores in the trendy Kreutzberg and Neue Koeln neighborhoods now accept them, including Long Player records, which sells old fashioned vinyl LP’s. Owner Narim Chebli says the possibility of paying in bitcoins brings him a steady stream of customers.

“In Kreuzberg and Neue Koeln there are a lot of young people,” he said, “and they’re open-minded for new things, for new payments.”

But what’s in it for him, accepting bitcoins? Marketing. He likes the contrast, he said, between the old and new.

"I think it’s interesting because I only have vinyl,” Chebli said, “and I take money that is digital. That’s the main reason.”

Ok, so for Chebli, it’s a gimmick. But make no mistake, Berlin is a veritable hub for Bitcoin believers. Actually they’re more than believers. Some are making serious money.

Joerg Von Minckwitz is the young CEO of Bitcoin Berlin, a start-up consulting firm teaching clients how bitcoins work, and how to use them.

“The basic idea is that everybody can be their own bank,” he said. “We don’t need banks anymore to transfer money. So in our mind, banks are kind of useless.”

When it comes to transferring money, Von Minkwitz says with Bitcoin, it is faster - and free. But he admits this is hardly a risk-free currency. In its four years, Bitcoin has bounced in value from pennies against the dollar to hundreds of dollars per unit.

“At the moment, it’s still fluctuating,” he said. “We’re in the early stage and the system has to grow to get more stable.”

Don’t invest your retirement money in bitcoins, Von Minkwitz said. Not yet, anyway.

Still Room 77’s Joerg Platzer said he’s confident that Bitcoin will stabilize in the long run. For him, it promises a real free market – that is, free of government control.

Since you’d be anonymous, you could even avoid the taxman or force the government to spend your money on things you want.

“The government could go like, okay, we have two plans,” he said. “One plan is we need bridges, hospitals and schools.  Or we want to build a secret surveillance infrastructure to read your emails. You decide what to spend your taxes on.”

Or your bitcoins, that is.