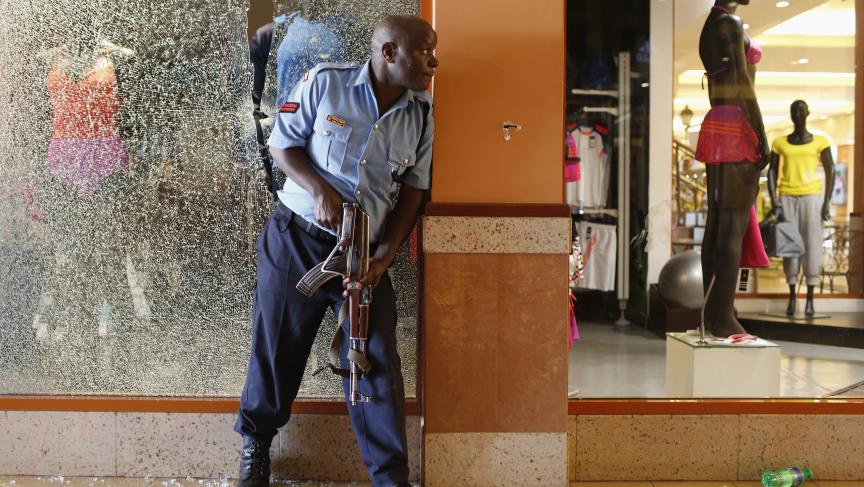 A Kenyan police officer tries to secure an area inside the Westgate Shopping Centre after a militant siege.

You might look around a city and see culture, commerce and art. But for militants all over the world, dense urban centers are increasingly seen as ideal battlefields.

Kilcullen is a leading thinker on counter-insurgency, and he had a big hand in writing the counterinsurgency manual that many U.S. soldiers rely on in the field every day.

His new book is called "Out of the Mountains: The Coming of Age of the Urban Guerrilla."

"What we're starting to see is a shift, away from the kind of rural insurgency that we've seen in the last decade, toward more focus on big urban targets - hotels, shopping malls, and railway stations, and a focus on what I've called the urban siege," Kilcullen says.  "[That's] where people will go in and instead of just attacking and taking hostages or setting off a bomb, they attack and fortify and try to hold an area for as long as they possibly can - nearly 100 hours in case of Nairobi, and about 60 hours in the case of the Mumbai attack and a lot of publicity and influence coming to their respective terrorist groups because of being able to sustain that siege for that length of time."

Kilcullen argues that military solutions are not the answer to what he calls the "urban overstretch" and rapid growth that create an environment where militants operate successfully.

Instead, he looks to city residents themselves for answers.  He sees hope in community-based programs that establish a presense on urban streets to monitor and prevent violence before it takes place.

"Security should come from the community itself, and from people that live on the street and can identify what's happening in their own environment," Kilcullen says. "The solutions are almost always things you don't know up front, going into the challenge. When you actually get on the ground and see how the system flows and works, and start listening to people who live there, and combining their knowledge with outside knowledge, that's when the magic happens, if you like, and you start to build together a design that's gonna work."