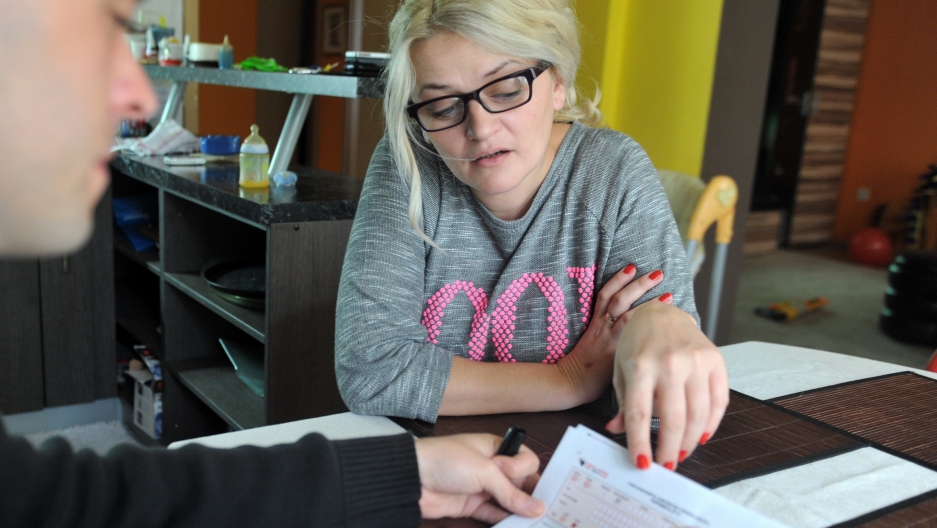 A Bosnian woman answers questions in Sarajevo for a census that's turned a statistical operation into a political issue.
Credit: Elvis Barukcic
Share

They would affect the fragile power-sharing system set up by the 1995 Dayton Peace Agreement, which stipulates ethnic public-sector quotas based on population numbers. All three sides fear the census will result in a loss of power.

The process is important for Bosnia’s hopes of joining the European Union. Up-to-date population data, seen as essential for social and economic reforms, is a key condition for accession talks.

As often happens in Bosnia, however, the bureaucratic process has taken a political turn.

The results of the 15-day count, due in mid-January, are expected to reveal the consequences of the 1992-95 war. Many, particularly among the Bosnian Muslim — or Bosniak — population, fear it will “formalize” the ethnic cleansing that took place.

“Regions that used to be ethnically mixed became totally homogenous,” says Marko Prelec, Balkans Program Director at the International Crisis Group. “Everyone knows what happened, but there is a view that by counting where people are now, it will in a way complete the ethnic cleansing by officially establishing that people who used to live in one place no longer do.”

The changes were particularly dramatic among the Bosniak population. Many could choose to declare their identities as “Bosnian” instead of “Bosniak,” which would put them in the category of “Others” — which includes smaller ethnic groups such as Roma, Jews and others not part of the three main ethnic groups.

“There is a lot of anxiety around that question,” Prelec says, adding that political and religious leaders have been actively campaigning to ensure that doesn’t happen.

“Some are trying to frighten people by saying if you identify yourself as a Bosnian, we’ll end up as a minority as half of us will be Bosniak and the other half will be Bosnian, and the Serbs will be bigger than either one.”

The Catholic Church and Croat politicians in Bosnia have also called on Croats to declare themselves as Croats and Catholics.

Prelec says the results could affect the perception each of the communities has of their place in the country and will probably be used politically.

There’s fear among non-Serbs that if it turns out as expected that Bosnia’s Serbian entity is overwhelmingly populated by Serbs, that could strengthen their claim for self determination and encourage them to seek independence.

Many ordinary people lament the political turn the census has taken.

Pedja Djurasovic, a 30-year-old Bosnian Serb from Sarajevo, believes the census is “necessary” but says he’s “afraid it will be used for the wrong reasons.” He says he has no doubt that “all politicians” in Bosnia will “exploit” the results as a diversion from the country’s “real problems.”

Lejla Sadovic, born in Sarajevo of a Croat mother and a Bosniak father, says she considers herself only a “Bosnian citizen.”

“I don’t want to be Bosniak, Croat or Serb,” she says. “It’s shocking that we have to choose between these three groups or be an ‘other.’ This is the only country where you can’t just declare you’re from this country.”

She says many of her friends plan to declare themselves “Martians” or other extraterrestrials.

Despite a ruling by the European Court of Human Rights that the constitution is discriminatory, the country’s authorities have failed to amend the constitution by allowing national minorities to run for high political office. Many Roma are expected to declare themselves as part of the constituent groups to benefit from the same rights.

More from GlobalPost: Georgians prepare for election amid worries about what will follow

Darko Brkan is the president of Zasto ne (Why not), which campaigns against discrimination against those excluded by the country’s three constituent groups. He says his organization wants to “use the census as a place to protest against the current arrangement” by encouraging them to declare themselves “Others.”

He expects some 20 percent of the total population to do so, which he hopes could be a “starting point” toward a “new social contract.”

He believes the political pressure surrounding the census from all constituent groups is a “joint campaign” aimed at “preserving and potentially extending their power.”

“These people have made private fortunes and gained power from the model introduced by Dayton, they want to maintain the status quo.”