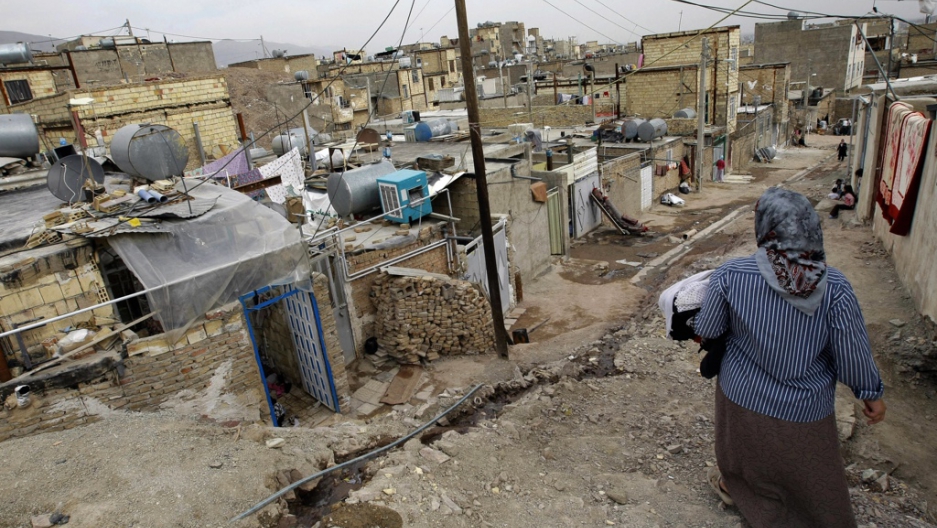 A poor neighborhood in the town of Ghaleh Hassan Khan on the outskirts of Tehran, Iran.
Credit: Behrouz Mehri
Share

UNITED NATIONS — They are the diplomatic world’s version of passive aggressive: economic sanctions.

Depending on whom you ask, they are either the best or worst way to punish a nation that’s violated international norms.

And yet, more often, they have looked like the path of least resistance: a way the international community shows displeasure at a country’s conduct without resorting to war. But it’s hardly a path with a long, easily listed record of success.

Now, once again, sanctions and their value are in the spotlight.

The phone line had barely gone dead after Friday’s historic call between Iranian President Hassan Rouhani and President Barack Obama when the great sanctions debate reignited. It’s far too soon to know if this telephonic exchange of presidential greetings will lead to a lessening of friction — let alone accommodation — between the United States and Iran.

But proponents of sanctions will claim vindication.

They argue that patience and the incrementally more specific nature of the sanctions affecting Iran produced first an electoral result (the would-be moderate reformist Rouhani) and then a genuine historic opening (the Obama-Rouhani phone call).

Those who view UN and other sanctions as a mere fig leaf — i.e., who support pre-emptive airstrikes on Iranian nuclear research facilities — argue quite the contrary.

This school views Obama’s willingness to speak directly with Tehran as an unreciprocated concession and the ultimate proof that sanctions failed to bring Iran to the table.

This is a very old debate, and whatever comes of the current diplomatic initiative with Iran, it’s unlikely to be settled soon.

For decades, the effectiveness of economic sanctions has been a question that divided foreign policy experts — and not necessarily along the usual right vs. left, hawk vs. dove lines.

The right, ever suspicious of multinational institutions, points to the fact that North Korea has survived arguably the most comprehensive economic isolation in modern history since its invasion of the South in 1950. In part, at least, the right’s argument that Saddam Hussein’s regime was sidestepping sanctions made up a significant part of its case for launching the Iraq war.

The left, too, questions the efficacy of sanctions. For a half century, the communist regime of Cuba’s Fidel Castro, and now his brother Raul, has withstood the American economic embargo. Some regard the sanctions themselves as one of Castro’s greatest strengths. Far from being a liability, they argue, the embargo gave Castro an excuse for the economic disaster wrought by his centrally planned economic system.

Ironically, the left opposed sanctions against Saddam’s regime, too, though on humanitarian grounds. In a dictatorship, the argument goes, the elite will find a way around sanctions: It is really the average people who suffer.

So what is the case in Iran? And can sanctions be given, at least in part, some credit for the more reasonable face the new Iranian leadership is putting forward?

From relatively modest roots in the freezing of Iranian assets by President Jimmy Carter during the 1979 Iran hostage crisis, the web of multinational and unilateral sanctions directed at the Islamic Republic has steadily expanded.

In the 1980s, following the deaths of more than 250 US Marines when an Iran-backed Hezbollah suicide bomber blew up their barracks in Beirut, the US added a complete ban on trade and investment.

In the 1990s, these sanctions intensified, though successive American presidents refrained from demanding that US allies also abide by them. President Bill Clinton’s administration banned “dual use” exports and tightened financial controls on banks dealing with Iranian companies.

By and large, during that period, a carrot-and-stick approach prevailed. Non-US Western firms did business in Iran and the US applied punitive pressure from the outside.

It wasn’t until 2006, after revelations by UN inspectors about the extent of Iran’s progress toward a nuclear weapon, that sanctions were internationalized.

That year the UN Security Council approved the first of four resolutions that ultimately imposed a global ban on the export of missile, nuclear and dual-use technologies to Iran. It also limited travel by senior Iranian officials, especially those of the Revolutionary Guard and its elite “Quds” group, and froze the assets of several dozen prominent Iranian banks, companies, financiers and regime insiders.

While this brought new pressure on Iran, most experts believe the real trouble for Iran’s government — via the Iranian economy — began with the implementation of a new round of “smart” sanctions in 2008, as well as the decision that same year of Japan and the European Union to add their own sanctions.

On July 1, the EU and Japan stopped buying Iranian oil. Together with new financial sanctions, this had a very important effect — precipitating multiple currency crises as the value of the Iranian rial plummeted. While Turkey, India and China, among others, have continued to purchase Iranian oil, the move by the EU and Japan has been devastating.

The loss of some of its most important customers has been exacerbated by new financial sanctions that have kept a majority of Iran’s exchange reserves frozen in escrow accounts around the world. Roubini Global Economics (my former employer) estimates as much as $60 billion of the $80 billion Iran claims to hold is now beyond reach.

The results have trickled down quickly to Iran’s influential middle-class merchants, whose support can make or break the regime. After decades of innovative adaptations to get around sanctions, merchants have literally run out of currency to import raw materials or consumer goods from the West or Japan, and what is on offer from China, Russia or other markets is far more expensive when paid for in the tumbling Iranian rial.

What’s more, with so much of the global energy market closed to Iran, states still buying Iranian oil know they have Tehran over a barrel. Iran has been forced to sell its oil in Asia at a steep discount — certainly far below the $90 per barrel most analysts believe the Iranian government needs to break even and fund social spending. In a country where 80 percent of the national budget comes from oil sales, this is catastrophic.

Throughout this process, detractors note that Iran has found ways around the sanctions. Powerful financial interests in the Arab Gulf have helped ensure hard currency flows. Allies in Iraq, since the departure of US troops, have provided a vast loophole, hosting front companies, allowing weapons over-flights that keep Syrian President Bashar al-Assad supplied.

Indeed, according to intelligence officials who spoke to Dexter Filkins of The New Yorker magazine, Iraqi officials directly pour tens of millions of dollars into the budget of the Quds Force, which directs Iranian covert action around the world, as well as the defense of Assad’s regime.

The final analysis may never prove how important sanctions were in the process of leading an American president and an Iranian president to direct dialogue. But what seems indisputable is this: Unless the nascent dialogue is an elaborate way to buy time for Iranian nuclear research (and that is the position of many Israeli hawks and their US supporters), the economic pain caused by sanctions most certainly helped elect the man on the other side of Obama’s phone line.