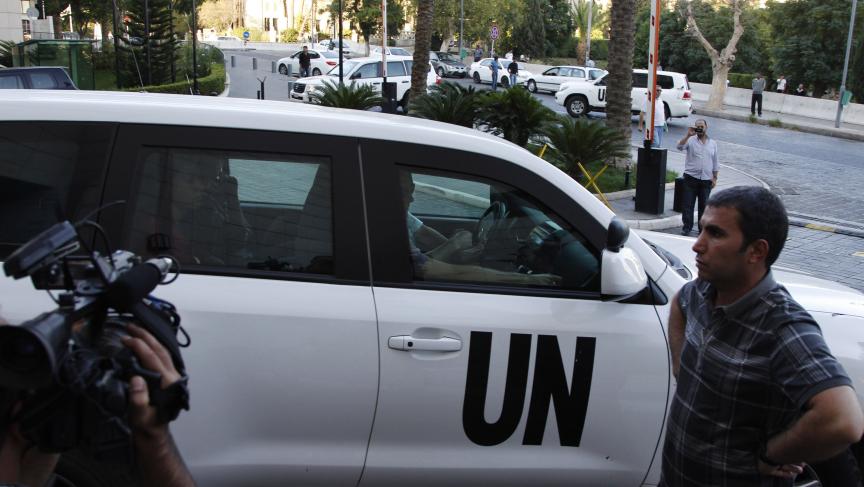 A U.N. convoy transporting a team of United Nations experts charged with starting the process of verifying and eliminating chemical weapons arrives at a hotel in Damascus on October 1, 2013.

International weapons inspectors tasked with the job of getting rid of Syria's chemical weapons stockpile arrived in Damascus today. The United Nations Security Council has given them just under a year to eliminate the entire weapons program. And that is only one of the hurdles they face in Syria.

The process starts with verification. Inspectors will be checking to see if Syria was honest when it made a formal declaration on its chemical weapons (CW) holdings and its capacity to produce any more such weapons. At the same time, they will oversee the destruction of equipment used in production.

"Syrian CW capability will be seriously degraded in the first month," says Charles Duelfer, a former CIA advisor and the head of a UN inspection team in Iraq. "I imagine you'll be seeing the destruction of production equipment... by bulldozers, basically just crushing it, and there will be video demonstrating this."

The regime in Damascus is adamant that it is serious about giving up its chemical weapons. After all, as spokeswoman Bouthaina Shaaban pointed out in an interview with the BBC on Tuesday, the Syrian government "is the party that volunteered joining [sic] the organization for non-proliferation of chemical weapons."

Cooperation from the Syrian government will be key to the success of the inspections process. Syria's foreign minister has said that seven out of 19 chemical weapons-related sites are located in combat zones. Before inspectors can visit those areas, pro-government forces are going to have to work out a truce with whatever rebel group - or groups - that might be active there.

A spokesman for the opposition Syrian National Coalition, Monzer Akbik, told the BBC that the rebel Free Syrian Army (FSA) would ensure that inspectors "will be protected, and granted access to all locations."

But the FSA is just one of many rebel groups involved in the fighting. And some of them could decide it is in their interest to play spoiler, especially if the weapons inspections process is seen as lending the regime of Bashar al-Assad international legitimacy.

"There may be an incentive for the insurgents to either attack or otherwise disrupt this [inspections] process," says Duelfer.

The inspectors in Syria are from the Organisation for the Prohibition of Chemical Weapons, based in The Hague. The OPCW has never before attempted to dismantle a country's chemical stockpiles in the midst of a war. But spokesman Michael Luhan told the BBC that the process is on track.

"Syria has complied with each and every milestone along the way," Luhan said. The Syrians "joined the Convention [banning chemical weapons]; in due course they made a full disclosure to us on their chemical weapons program."

"So they, until now, have done everything to facilitate and enable OPCW to get on with the verification measures."

One final challenge Duelfer talked about is bureaucratic in nature. The position of head weapons inspector has yet to be filled. That person, Duelfer said, and his or her Syrian government counterpart, will have a major impact on how these inspections play out.

"Personalities on the ground matter," Duelfer said. "There's a trust and a relationship that has to be built up between the two parties on the ground. That's vital. If you get a good person on both sides, it'll make it a lot easier."