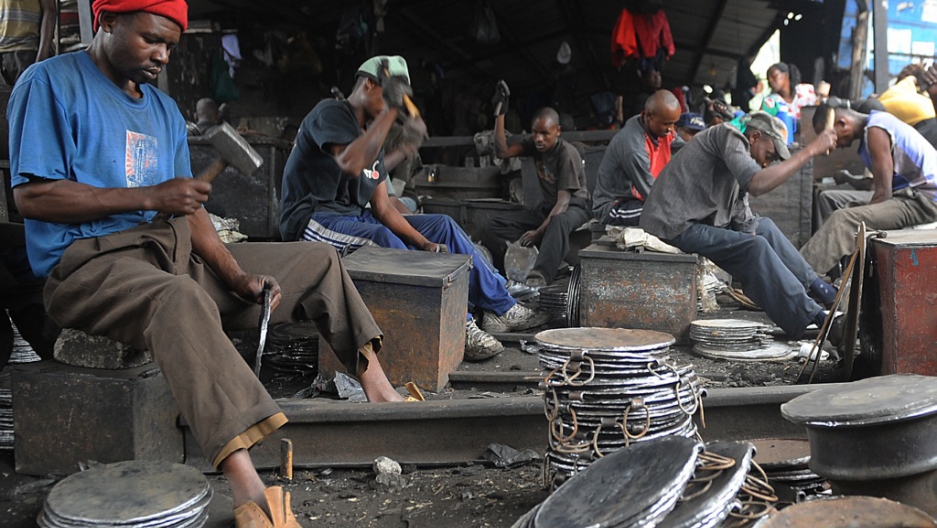 Kenyan blacksmiths make frying pots that sell for $3.5o each at the Kamukunji market in Nairobi on June 20, 2012. The 2013 Afrobarometer survey of 34 countries put into sharp relief the continent’s much-vaunted GDP growth rates by looking instead at the daily lives of Africans, who say they are not benefiting from economic growth.
Credit: SIMON MAINA
Share

JOHANNESBURG, South Africa — There's been a lot of talk in recent years about the "African economic miracle."

But you may want to hold off on believing all the hype.

Africa’s economic boom is failing to reduce poverty or improve the lives of ordinary people in many countries on the continent, according to a new survey.

The findings of the latest Afrobarometer survey of 34 countries, released Tuesday, put into sharp relief the continent’s much-vaunted GDP growth rates by looking instead at the daily lives of Africans, who say they are not benefiting from economic growth.

While economic growth rates in Africa are among the highest on the planet, roughly one in five Africans said they often lack food, clean water and medicine to meet even basic needs. Nearly half of survey respondents said they experience occasional shortages.

Other statistics, by contrast, have found that poverty is declining in Africa, with World Bank data showing that fewer people are living on less than $1.25 a day. But the Afrobarometer survey, focusing on the perceptions of Africans themselves, may add important nuance to the debate.

The survey determines “lived poverty” by asking set questions to measure how often people go without the basic necessities of food, clean water, cooking fuel, access to medicine and a cash income.

“While there is compelling evidence in support of Africa’s economic performance, questions about whether this growth is contributing to the reduction of poverty remain highly contested,” the report said.

"Meeting their basic daily needs remains a major challenge for a majority of Africans, even at a time when their countries are reporting impressive economic gains.”

Boniface Dulani, manager of Afrobarometer’s field operations, said many survey respondents were pessimistic about the lack of improvement in their daily lives, and unhappy with the economic conditions in their countries.

But he said there was also a sense of optimism about the future, with respondents expecting their living conditions to improve in the next 12 months.

“There’s an expectation that maybe things are moving in the right direction, so people are looking forward to a better future. But the benefits have not as of yet trickled down,” Dulani said.

“This story that Africa is rising is not being matched — or at least, the ordinary people of the continent are not sharing in that kind of optimistic projection of where African countries currently stand,” he said.

The highest average levels of poverty were reported in Burundi, Guinea, Niger, Senegal and Togo, while people living in Algeria and Mauritius experienced the lowest.

The survey suggested that investments in social services and basic infrastructure, such as piped water and electrical grids, are strongly linked with lower poverty levels.

Fatima Shabodien, South African country director for Action Aid, the global anti-poverty group, said the Afrobarometer survey results show that macroeconomic data can be misleading as an indicator of a country’s progress.

“In a country like South Africa we’ve seen that it is possible to grow and not affect poverty very significantly,” she said.