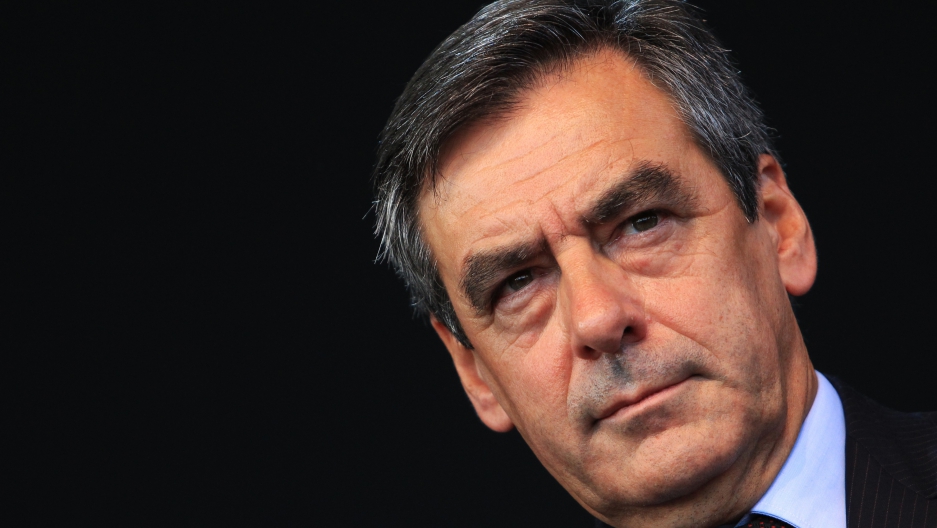 Instead, mainstream conservatives have found themselves grumpily divided over how to defend their voter base against a growing threat from the hard-line National Front (FN) as the center-right prepares for its first major electoral test since its defeat by Hollande last year.

The National Front's rise in the polls ahead of nationwide municipal elections in the spring has placed the main center-right party, the Union for a Popular Movement (UMP), in a bind.

The party is split between those hoping to win back votes by co-opting the Front's nationalist and anti-immigration agenda, and moderates seeking to regain control of the political middle ground.

That rift has been laid bare by former UMP Prime Minister Francois Fillon, who has suggested the center-right should end a long-standing policy of boycotting the National Front.

In town hall elections where the choice is between Socialist and far-right candidates, Fillon said UMP supporters should vote for the "least sectarian" candidate — overturning the party line, which urges abstention rather than a vote for the FN.

Fillon's comment brought a storm of protest from the left as well as moderates on the right, but polls showed 72 percent of UMP supporters agreed.

"Their problem is that if the left is losing, it's not necessarily the UMP that's winning," says Olivier Rouquan, senior lecturer at the French Higher Institute of Public and Political Management.

"The National Front is out there and the UMP is fearful of stagnating," he said in an interview from Paris. "They worry over what to do about an electorate that is radicalizing. Fillon's declaration aims to mobilize those in the UMP who fear the party is too moderate, not far enough on the right."

Fillon, who was prime minister for five years under President Nicolas Sarkozy until their May 2012 defeat by the Socialists, reached out to far-right voters again on Sunday.

"We have to go meet those voters who let themselves be swept along by the siren song of the National Front," he told a UMP rally in the central Loire region. "Nothing will stop me talking to my compatriots who think everything is a mess and who love their country and fear for it ... treating them as pariahs goes against the values of the republic."

However, center-right moderates find the idea of a deal with the National Front anathema.

"The UMP's claim to represent the right and the center died this week," Jean-Louis Borloo, a former vice-president of the party said in response to Fillon’s voting idea.

Borloo left UMP in 2011 in protest at an earlier rightward swing under Sarkozy.

Another former UMP prime minister, Jean-Pierre Raffarin, warned that the question of voting for the FN risked breaking up the party. "Red alert. A vote for the FN is a fault line for the UMP," Raffarin tweeted. "The pact on which we are founded is at stake."

The dilemma over cutting a deal with the far right has also bedeviled traditional conservative parties elsewhere in Europe as radical nationalists gain ground in increasingly fractured political landscapes.

When Austria's conservatives broke a Europe-wide taboo by inviting the far-right Freedom Party to join a coalition government in 2000, there was international outcry and other European Union nations sought to impose sanctions. Since then, however, conservative governments have entered coalition or parliamentary support deals with the radical right in Italy, Slovakia, Denmark, the Netherlands and other EU countries.

In Austria on Sunday, the Freedom Party saw its support surge to 21 percent — which almost beat the conservatives into second place. This time, however, the conservatives look likely to reject an alliance with the hard right and maintain a broad coalition with the Socialists.

In France, Fillon's critics say his outreach to the National Front has boosted the efforts of FN leader Marine Le Pen to bring the party in from the political fringe.

Since taking over from her father Jean-Marie Le Pen in 2011, she has sought to broaden the party's appeal, blending traditional anti-immigration rhetoric with calls to defend France's generous social security system and protective labor laws against a perceived threat from global competition. The European Union and gay marriage have also become targets of choice for the party.

Polls currently give the FN around 16 percent, putting it in third place behind the center-right with 35 percent and the Socialists with 26 percent. But while support for the traditional parties is falling, Le Pen's is steadily rising.

"There's growing dissatisfaction and discontent among voters towards political leaders, the National Front is the party that is profiting most from that unhappiness," says Rouquan.

Mainstream politicians fearful of losing city halls to the Front in the spring have competed in recent weeks in calling for a crackdown on Roma migrants from the Balkans and Central Europe.

After Jean-Marie Le Pen denounced the "itchy and smelly presence" of Roma in the Cote d'Azur resort of Nice, mainstream politicians waded in to attack the migrants, who are estimated to number around 20,000 in France.

One center-right mayor suggested he'd support any of his townspeople who killed a Roma, another was reported as saying "maybe Hitler had not killed enough," a reference to the Nazi extermination of what some estimates put at up to 1.5 million Roma, who are also known as gypsies.

Fearful of appearing weak, the Socialist government has stepped up expulsions of Roma, which they had denounced while in opposition to Sarkozy. "These people have lifestyles that are very different from ours and are clearly in confrontation" with local populations," Interior Minister Manuel Valls said during a radio interview last week.

Meanwhile, Marine Le Pen is promising that those townspeople who vote in National Front mayors next spring won’t have to worry about a Roma problem.

Beyond the municipal elections, Fillon and other conservative bigwigs are already staking out their claim to lead the center-right challenge to Hollande in the 2017 presidential elections.

Fillon had been viewed as a moderate. His outreach to the National Front is widely seen as an attempt to win support away from his party's current leader, Jean-Francois Cope, who is considered to be more to the right.

More from GlobalPost: Cannabis for Kreuzberg

In the popularity stakes, however, both lag well behind the man that the overwhelming majority of UMP supporters want to see running for president: Sarkozy.

After a year of silence following his May 2012 defeat, the former president is increasing his public appearances in preparation for an expected political comeback. A Sept. 20 poll found 62 percent of party supporters want him to run.

Sarkozy's biggest obstacle could well be in the courts rather than a party primary. He's under investigation over allegations of helping to dupe France's richest woman — 90-year-old L'Oreal heiress Liliane Bettencourt — into donating election campaign funds.