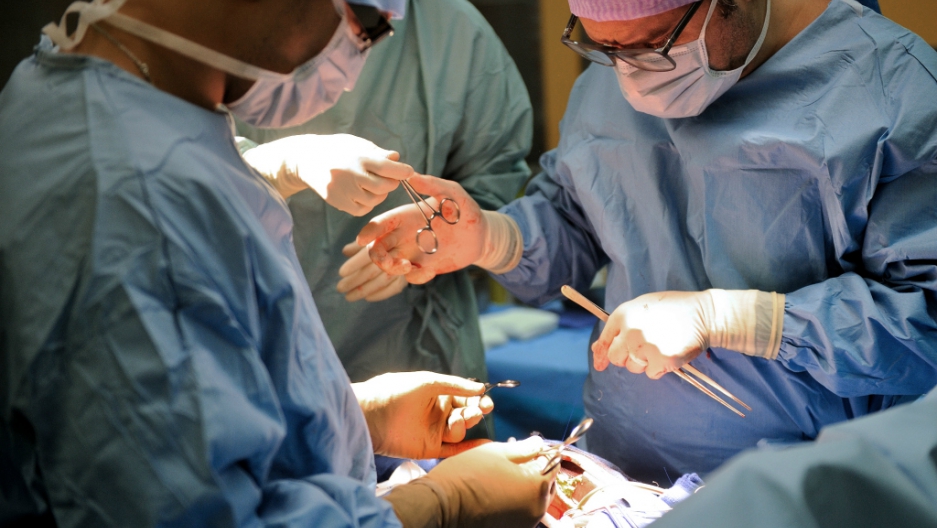 It's the last day to sign up for Obamacare! Or you could just move.

Recently, Bloomberg ranked countries according to efficient health-care systems. Here, GlobalPost looks at the Top 5 on that list — most of which are state-funded universal health-care systems like those in Israel, Singapore and Australia — as well as a few other countries that are quite simply doing something right when it comes to health care.

The last time the World Health Organization ranked countries according to health care, it found that "France provides the best overall health care." Granted that was a while ago (2000), but as GlobalPost's Mort Rosenblum put it in 2010: "Yes, yes, employers pay high social charges on salaries, and some hypochondriacs abuse the system. But it all works."

The French system is one of universal health care largely financed by government national health insurance. Around 77 percent of health-care costs are covered by the state.

The French live two years longer than Americans, with half the infant mortality. France spends less than 11 percent of GDP on health compared to more than 16 percent in the United States. Cancer treatment is free. When Genentech developed Avastin, Business Week calculated a year’s supply at $48,000 in America. It cost patients nothing in France.

Public hospitals account for 90 percent of in-patient procedures, while the numerous private options are mostly used by the wealthy. All this government care isn't taking much of a bite out of the state's bustling economy: According to Bloomberg, Hong Kong spends just 3.8 percent of GDP on health care per capita, tied for the third-lowest among nations surveyed and good for the most efficient health care system in the world.

Here's more from Hong Kong's health secretary on how "public health care is the cornerstone" of their system.

Singapore, No. 2 on Bloomberg's list, has a health-care system largely funded by individual contributions — one that Huffington Post says is often hailed by conservatives as a beacon of personal responsibility.

But David Frum says the system is actually fueled by the public sector. Individuals are required to contribute a portion of their monthly salary to a personal fund to pay for treatments and hospital expenditures.

In addition, the government provides a safety net to cover expenses for which these personal savings are inadequate. Private health care still plays a role in Singapore's system, but takes a backseat to public offerings, which boast the majority of doctors, nurses, and procedures performed.

The great strength of Australia's system is affordability and access, according to GlobalPost's Alan Mascarenhas. It offers cradle-to-grave health care for everyone and covers most or all of the costs for physician consultations, as well as specialists’ fees and X-rays and pathology tests. Treatment in public hospitals is free.

Though, as Mascarenhas points out, Australia's system is far from perfect. About 40 percent of Australians choose to purchase private insurance, making them eligible for treatment in more exclusive, privately-run hospitals.

Third on Bloomberg's list of countries with efficient health-care systems is Japan, where the Huffington Post says there is universal health care with mandatory participation funded by payroll taxes paid by both employer and employee, or income-based premiums by the self-employed. Long-term care insurance is also required for those older than 40.

In order to prevent the spread of swine flu, students wear facemasks in Tokyo, May 21, 2009. (Photo by Junko Kimura/Getty Images)

Dr. John W. Traphagan notes in The Diplomat that Japan controls costs by setting flat rates for everything from medications to procedures, thus eliminating competition among insurance providers. While most of the country's hospitals are privately owned and operated, the government implements smart regulations to ensure that the system remains universal and egalitarian.

In 1995, 40 percent of Taiwanese had no health insurance. Today, nearly every one of the country's 23 million residents is covered.

GlobalPost's Jonathan Adams reports that Taiwan spends 6.5 percent of its gross domestic product on health care (versus almost 16 percent in the US), and more than 80 percent of the population is happy with the system. Adams looks into why Taiwan's system is so effective, and how the island republic's unique political situation allowed reform to happen.

"Throughout Chinese history, Confucianism says the government has to take care of the people, no matter what," said Michael Chen, of Taiwan's Bureau of National Health Insurance. "So we are obligated to make sure 100 percent of the population is covered."

Bloomberg pegged Israel at No. 4 on its list of countries with the most efficient health-care systems.

Haaretz says the efficiency of the Israeli health-care system stems from the small number of large HMOs, government control over prices and strict regulation. Citizens in Israel must have at least basic insurance coverage at one of the country's four HMOs, with 80 percent of the population belonging to the two largest.

Spain's single-payer health care system is ranked No. 5 on Bloomberg's efficiency list and seventh best in the world by the World Health Organization, according to NPR.

The system offers universal coverage as a constitutionally-guaranteed right and no out-of-pocket expenses — aside from prescription drugs. Patients do complain, however, about the long wait to see specialists and undergo certain procedures.