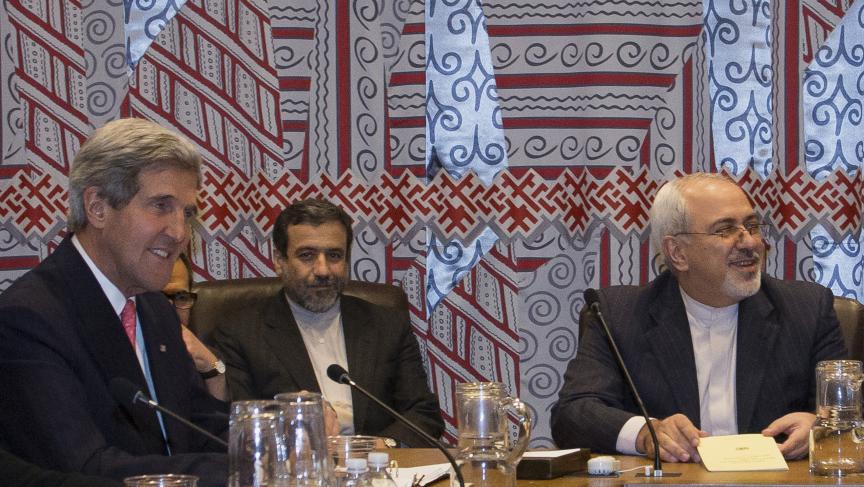 US Secretary of State John Kerry (L) and Iran's Foreign Minister Mohammad Javad Zarif (R) are seated during a meeting at the United Nations.

The American diplomatic contacts with Iran are unsettling Saudi Arabia, and some of the smaller Gulf Arab states.

"The telephone call between President Obama and President Rouhani (of Iran) has been very much in the news in the Gulf states," says Gregory Gause, a profesor of political science at the University of Vermont.

The call he says "has been seen by some commentators there as the beginning of a huge geopolitical shift. I think this is an exagerration, but I think that the government of Saudi Arabia, and the smaller Gulf states; those governments worry that the United States will not be a reliable ally, that it will quote-unquote sell out their interests in a deal with Iran. I think this is an exaggerrated view, but I think there is a fear that the US will go further than it actually will in accomodating the Iranians," Gause added.

Saudi Arabia has long seen Iran as an enemy, and the two nations are competing for power across the Middle East in a kind of mini-Cold War.  The Iranians and Saudis are backing different actors in Iraq, Lebanon, Bahrain, Yemen and most violently, in Syria.

"I do believe this is a balance of power conflict between two states that are looking to be the main actor in their part of the world," says Gause.

The sectarian nature of the conflict is exaggerrated according to Gause. The Saudis are seen as champions by many Sunni Muslims, while Shias "naturally look to Iran" says Gause.

The Saudis were already anxious about recent US responses to events in Egypt and Syria. The Saudis were strong supporters of the military coup in Egypt in July, and were troubled by the US raising questions about the overthrow of a legitimately elected government.

Gause says the US failure to follow through on threats over Syria has left Obama looking weak and naive to the chattering classes in Saudi Arabia. That may not apply to the top levels of government, he added, but they share the disappointment.