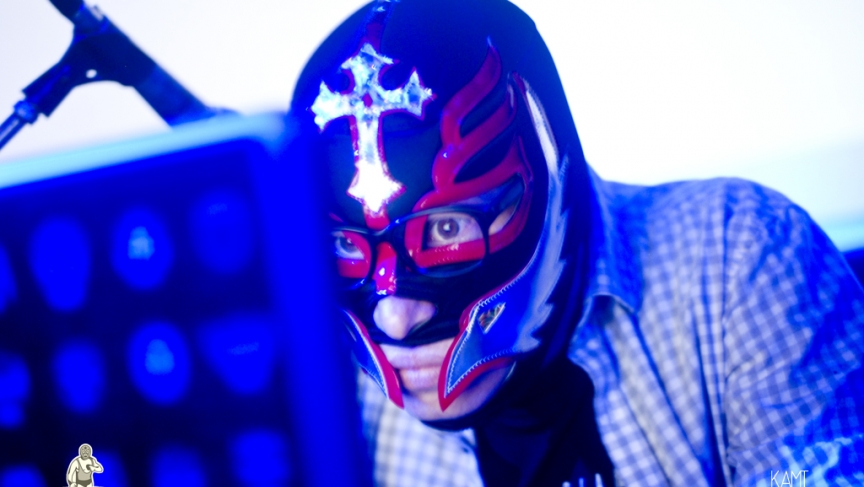 On a chilly Monday night in Lima, a bar called La Noche is packed. Usually people come to see live bands. But tonight they're here for Lucha Libro.

It's a twist on Lucha Libre, Mexico’s version of pro wrestling, where competitors put on masks and pseudonyms to duke it out in a ring.

Peru's Lucha Libro is kind of like that, without the violence. It's literary "wrestling." New writers don masks, and head onto a stage where they’re given three random words, a laptop hooked up to a gigantic screen, and five minutes to write a short story.

At the end of a match, the losing writer has to take off his or her mask. The winner goes on to the next round, a week later. And the grand prize? It's a book contract.

It's not easy to jumpstart a writing career, anywhere. But in Peru - where books are expensive, and published in very small numbers - it's especially tough.

Tonight, an announcer in a striped referee shirt takes the stage to welcome the crowd, mostly in their 20s and 30s wearing a lot of big glasses and skinny jeans.

The first contestant is a guy who goes by the name "Chicken Wilson." He's tall and goofy, but when he sees the three words projected on the screen behind him, he gets serious. He's got monkey, plane ticket, and dictionary to work with.

The announcer counts to three, and the clock starts. No one's talking, but just a paragraph in, Chicken Wilson freezes. The seconds are ticking by, so the crowd starts cheering him on. He rallies, dashing off a short story about monkeys living in the city, and an American girl on vacation in Peru.

This event is more than just a bunch of young writers fooling around in wrestling masks, according to Dante Trujillo, who runs the Solar editorial house, which will publish the winning writer. Trujillo says that even though Peru's economy is doing well right now, Peru is still feeling the impact of some hard decades. There was the military government in the 70s, the civil war in the 80s, and then, the collapse of the economy.

“So the prospects for young authors just beginning their careers, the best advice you can give them is to get out of Peru,” Trujillo says.

Backstage at Lucha Libro, Chicken Wilson explains that his pseudonym is a family nickname. But other contestants say there's more to their stage names. One young woman with a pale blond braid falling out the back of her black wrestler's mask calls herself L.

“When I write,” she says, “I often write lyrical pieces, poems, and I usually sign them with that one letter. ‘L’ also stands for ‘loser,’ and to me, this concept of ‘the underdog,’ of a person that nobody thinks can win, I'm really into that.”

Actually, it's Chicken Wilson who ends up losing his match, while L advances. Whoever wins the final round in a few weeks will have six months to finish their book. It'll be released at the Lima Book Fair, where the writer will take off the mask and reveal his or her real identity, for the first time.

The chance to win that coveted publishing contract is important, says writer Christopher Vasquez, one of the founders of Lucha Libro, but there's more to the contest than that.

“It's also about changing the idea that literature is boring. This turns it into an event. Because it's not just about the opportunity for a young person to become a writer,” he says. “It's also about having a place for young people to hang out - and to read.”