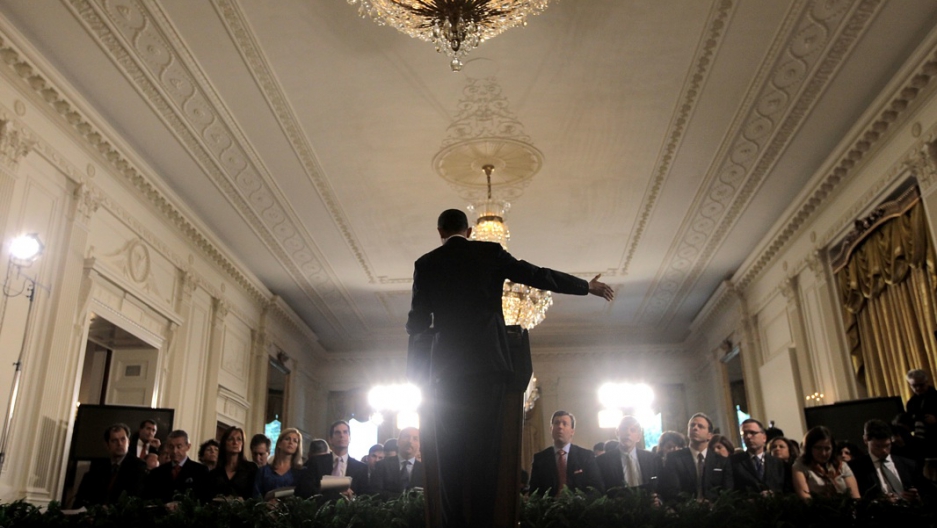 The US government shut down early Tuesday for the first time since 1996 after lawmakers divided over Obamacare failed to reach an agreement to fund federal agencies through the next fiscal year.

President Barack Obama called it the "height of irresponsibility."

Speaking Tuesday afternoon, Obama slammed Republicans for shutting down the government as part of an "ideological crusade" designed to kill his signature health care law.

"I urge House Republicans to reopen the government," Obama said at the White House Rose Garden, while surrounded by Americans he said would benefit from the Affordable Care Act.

Obama firmly placed the blame on Republicans, saying he wanted "every American to understand why it did happen."

"One faction of one party in one house of Congress in one branch of government shut down major parts of the government all because they didn't like one law," Obama said.

"They have shut down the government over an ideological crusade to deny affordable healthcare to millions of Americans."

Wide shot as Obama speaks about #governmentshutdown, calling it the "Republican shutdown" pic.twitter.com/pYSNnuXk96

Obama insisted that the Affordable Care Act was "here to stay" despite the Republican effort to roll it back. He said that despite dire warnings from the Republicans, "There are no death panels. Costs haven't skyrocketed; they're growing at the slowest rate in 50 years," and the act didn't "destroy our economy."

Obama conceded that there would be some glitches in rolling out the Affordable Care Act, and said the reason the healthcare.gov website was slow Tuesday morning was because more than a million people visited it before 7 a.m.

Speaking to Congress, Obama said, "Congress generally has to stop governing by crisis. They have to break this habit. It is a drag on the economy. It is not worthy of this country."

More from GlobalPost: Who will blink? Republicans push US toward shutdown (VIDEO)

Obama signed a bill Monday night ensuring military personnel get paid during the shutdown, but an estimated 800,000 federal employees will not have jobs to go to come Tuesday morning.

Government operations ranging from veterans' centers to national parks and most of the nation's space agency are now shuttered.

House Republicans tried three times to tie Obamacare to a government funding bill, but the Democrat-controlled Senate rejected each and every attempt.

They actually did it. A group of Republicans in the House just forced a government shutdown over Obamacare instead of passing a real budget.

The first two House bills involved defunding Obamacare, while the third would have delayed the individual mandate of Obamacare for a year and barred the federal government from contributing to the health insurance of the president, lawmakers and staffers.

The final House bill nearly died on a procedural vote after both moderate Republicans and hardliner members of the GOP complained, but Speaker John Boehner was able to keep his caucus in line and pass the measure on a 228-201 vote.

More from GlobalPost: Poll on US government shutdown spells trouble for Republicans

Senators, however, quickly stripped the bill of any mention of Obamacare, just as they had two times before, and sent it back to the House yet again.

“We are not going to mess around with Obamacare," Senate Majority Leader Harry Reid said. "They need to get a life.”

Obama held out hope that Congress would "do the right thing again" in the 11th hour, telling reporters in a surprise news conference Monday afternoon that a government shutdown "doesn't have to happen" and would have a real and lasting impact on the recovering US economy.

"You don't get to extract a ransom for doing your job," he said.

The House and Senate are meeting in conference committee in an attempt to hash out their differences over a budget bill.

Meeting with Israeli Prime Minister Benjamin Netanyahu, President Barack Obama told reporters earlier on Monday he was "not at all resigned" to the first government shutdown since the winter of 1995-96.

"The bottom line is that the Senate has passed a bill that keeps the government open, does not have a lot of extraneous issues to it, that allows us to then negotiate a longer-term budget ... but ensures that we're not shutting down the government ... at a time when a lot of families" are just now digging themselves out of hard times, he said.