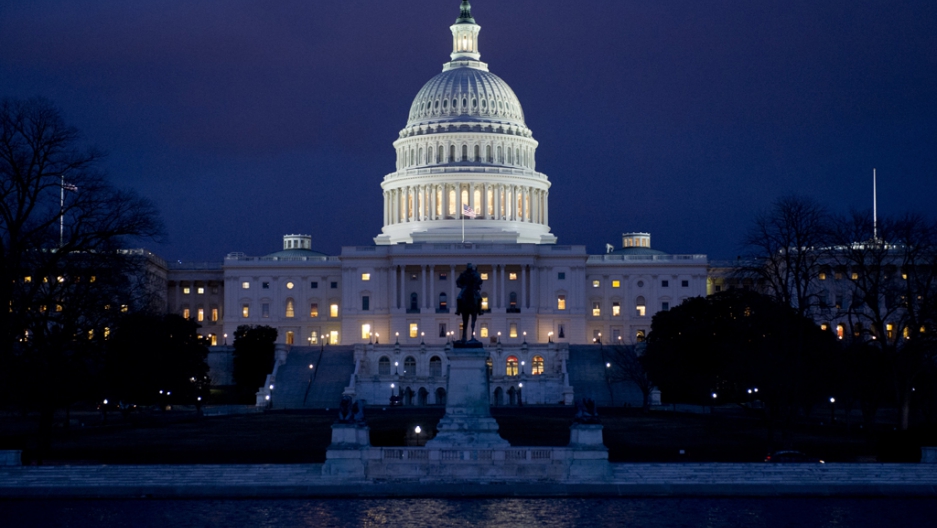 The US Capitol in Washington, DC, is seen on Feb. 28, 2013. US President Barack Obama summoned congressional leaders Friday in a bid to avert budget sequestration, but Obama was bound by law to initiate the automatic spending cuts on March 1, 2013.
Credit: Saul Loeb
Share

US lawmakers traded barbs and blame Sunday, waiting for the other party to blink to break an impasse over spending and avoid a government shutdown.

House Speaker John Boehner accused Senate Democrats of "breathtaking arrogance" for not immediately taking up a spending measure passed by the House early Sunday that would keep the government open, but delay Obamacare for a year.

More from GlobalPost: Capitol quiet as US government shutdown nears

The Senate passed a similar measure Friday, but stripped it of the Obamacare defunding clauses imposed by the House last week.

The result is a game of "who blinks first."

Senate Democrats say they plan to again pass a government spending bill Monday without Obamacare clauses, leaving House Republicans to either compromise or allow the US government to shut down for the first time since 1996.

GOP leaders tried to point the fingers at others in interviews Sunday, claiming a shutdown wouldn't be their fault.

More from GlobalPost: US government shutdown likely over Obamacare row

“If we have a shutdown, it will be because Harry Reid holds that absolutist position and essentially holds the American people hostage,” Texas Sen. Ted Cruz said on NBC’s “Meet the Press.” “He says, ‘I’m not willing to compromise, I’m not willing to even talk. His position is 100 percent of Obamacare must be funded in all instances. Other than that, he’s going to shut the government down.”

He and other conservatives declined to say Sunday whether they would continue to obstruct efforts to keep the government running.

The current standoff is a harbinger of a far-more consequential battle to raise the US government's debt ceiling by $16.7 trillion. Failure to do so by mid-October would force the United States to default on some payment obligations — possibly crippling its economy and sending shockwaves around the globe.

[View the story "As government shutdown looms, Twitter reacts with #ShutdownTheGOP" on Storify]