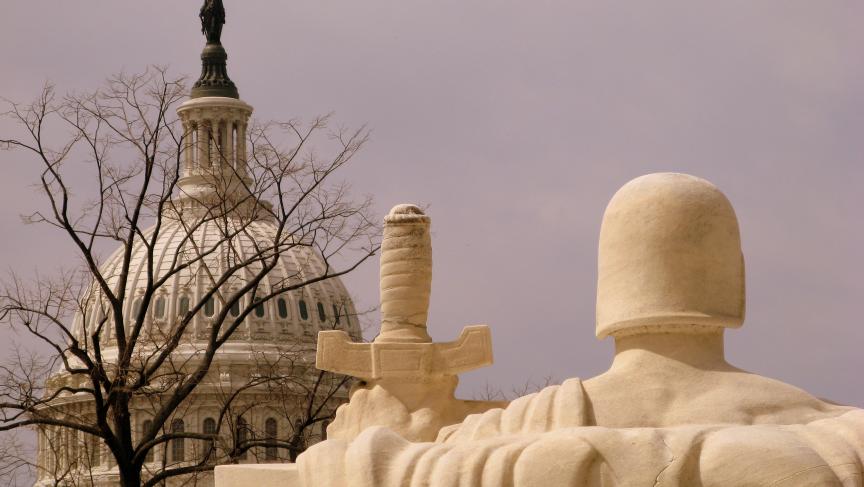 Congress is gridlocked as Republicans and Democrats both dig in over a bill that would keep the government operating after spending authority expires on Oct. 1.

In a matter of hours, if everything goes as feared, the federal government will roll up the carpets and shut the doors — with only essential services and essential employees continue to keep the government minimally functioning.

With no compromise and no movement, there's no government. Unless they strike a deal on a spending bill by the end of the day, the government will begin closing shop at 12:01 a.m. Tuesday. If the two parties can't agree, the government will shutdown for the first time since late 1995 and early 1996.

Takeaway Washington Correspondent Todd Zwillich, who has followed the drama straight through the weekend, said there's talk among some more moderate, and more veteran, Republicans that their newer, more junior, colleagues may need to "put their hands on the stove" — to learn not to shut the government down again.

But Zwillich said there's still hope a shutdown can be avoided.

"I'm here to tell you that even though it is dire, and it is the zero hour ... there is still time," he said. "The Senate is going to deal with the latest House gambit today, then there will be some choices in (House Speaker) John Boehner's lap."

The Senate is expected to take the House bill, which delays Obamacare for a year and repeals a tax on medical devices that pays, in part, for healthcare reform, and pass it without those two key provisions.

"Let them send us whatever they're going to send us," Senate Majority Leader Harry Reid said, "and we'll send it right back to 'em stripped of all this craziness that they have."

Interestingly, many Democrats have supported repealing the $40 billion tax on medical devices, but Zwillich says the message Democrats are trying to send is they're not interested in negotiating with a gun to their head.

"A lot of this is about implications beyond a government shutdown," Zwillich said. "Don't forget about that debt limit breach coming Oct. 17. There is a lot of posturing going on trying to improve people's negotiating position for the debt limit, which is really far, far more serious."

Reid needs merely 51 votes to strip the House bill of the healthcare-related provisions, which then puts the ball back in Boehner's court.

He can follow the wishes of the 40-50 Republicans, Zwillich said, who want a shutdown over this, or collect as many Republicans as he can and partner with Democrats to pass a continuing resolution to keep the government operating.

"(It's a) clean funding of government spending through Nov. 15 probably, with no other policy riders on it," Zwillich said. "And keep negotiating on spending until then."

But the road he takes could have a profound impact on his future as a leader in the House of Representatives.