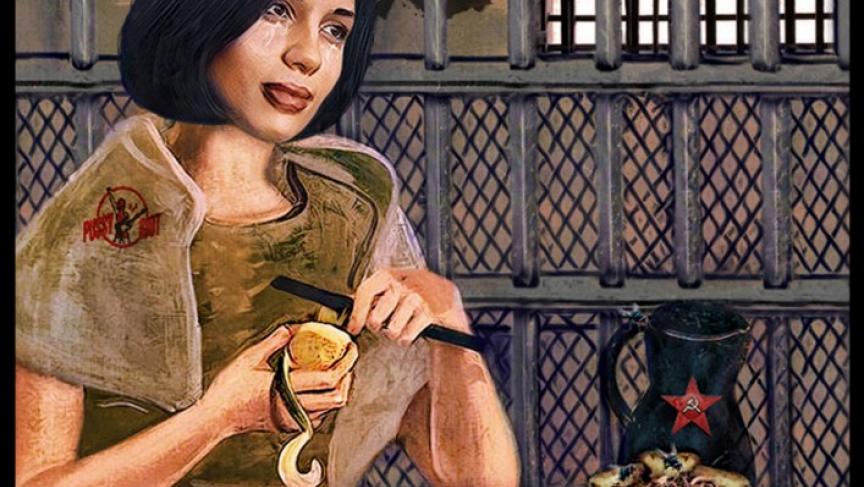 An illustration of Nadezhda Tolokonnikova, an incarcerated member of the Russian band Pussy Riot.

There are two hunger strikes underway in Russia this week, and the different receptions they've had with the country's chattering classes says a lot about the country's politics.

The more prominent protest belongs to Nadezhda Tolokonnikova, the best-known and most outspoken member of the punk band Pussy Riot. She is currently serving a two-year prison sentence after a Moscow court convicted her of hooliganism last year. On Sept. 23, 2013, Tolokonnikova announced her hunger strike in a 2,300-word letter [ru], published on the popular Internet news site Lenta.ru.

In the letter, she details her prison's slave labor conditions and claims officials have threatened her life. Days after the letter went public, Ilya Shablinksy, a member of the Presidential Council on Human Rights, visited Tolokonnikova's prison, meeting with her and seven other inmates. In comments [ru] to the press after the interviews, Shablinksy verified Tolokonnikova's allegations, saying the conversations made his “hair stand on end.”

Suddenly reminded of the existence of Pussy Riot and its star iconoclast, Russian bloggers have been mesmerized with Tolokonnikova's resurgent drama. Her letter — an eloquent appeal partly for her own safety, but also for the well-being of her fellow inmates — pulls back the curtain on living conditions in Russia's penitentiary system.

Much as her band's infamous “punk prayer” tapped the country's polarized attitudes about the Orthodox Church's role in government, Tolokonnikova's letter and hunger strike (which has already led to her hospitalization [ru]) began a public dialogue about the state of Russian incarceration.

If we split the blogosphere between “opposition” and “pro-government” bloggers, it's possible to note some surprises. For instance, Maksim Kononenko, a generally pro-Kremlin columnist and popular blogger, celebrated [ru] Tolokonnikova's letter as a selfless attempt to rescue her fellow inmates. Kristina Potupchik, the former spokesperson of a prominent pro-Putin youth group, wrote [ru] on LiveJournal that cruelty to prisoners contravenes “common sense.”

Both Kononenko and Potupchik criticized those who welcomed the news of Tolokonnikova's suffering. In what was likely a conscious misrepresentation, Potupchik and pro-Kremlin blogger Marina Yudenich mocked [ru] Tolokonnikova's former lawyers, Mark Feygin and Nikolai Polozov, for a crude joke seemingly made at her expense. In fact, the two attorneys were ridiculing [ru] another Pussy Riot member, Yekaterina Samutsevich, who is suing Feygin and Polozov for malpractice.

Tolokonnikova's hunger strike, however, is not the only in Russia. More than a week before Tolokonnikova's protest began, dozens of mothers of disabled children in Volgograd announced their own hunger strike [ru], demanding better state assistance for their kids and the local governor's resignation. The demonstration follows allegations of mass fraud [ru] in Volgograd's recent municipal elections, which went relatively unnoticed by Russia's Moscow-dominated media.

Participants and supporters of the hunger strike, such as Yelena Grebeniuk and Yelena Samoshina, have tried to utilize the Internet in order to publicize their campaign. For example, Samoshina's Vkontakte page [ru] is full of links to local news coverage and appeals for help from the public (like a request [ru] on Sept. 26 for donations of mattresses and bedding for the women hunger striking), and Grebeniuk's LiveJournal features a brief interview [ru] posted on YouTube of her explaining the strike's demands.

Needless to say, the Volgograd mothers have not galvanized Russian bloggers to the extent that Pussy Riot does. BesTToday.ru, a Russian Internet project that collects “the best in blogs” to represent what conversations predominate, still doesn't feature a section on Volgograd's ongoing unrest. While it's true that Tolokonnikova's letter and protest speak to the larger issue of Russia's prison system, the Volgograd action is also tied to a matter of wider political salience: the protection of vulnerable children, a subject ostensibly at the center of past pro-children rallies [ru] against changes in Russian adoption policies.

Why have bloggers reacted so differently to these two seemingly similar cases? Even a superficial glance speaks volumes. Bloggers and journalists writing about Tolokonnikova rarely fail to include a photograph from last year of her looking defiant (and radiant) in court. Even Tolokonnikova's critics are drawn [ru] to remarks about her sexuality, which played a central role in her activism as a political artist. Meanwhile, in Yelena Grebeniuk's YouTube video about the Volgograd mothers (which is still struggling to attract more than 250 views), bloggers are greeted by a middle-aged woman slouching under a portrait of Lenin. Flanked by Coke bottles and wearing a tracksuit jacket, Grebeniuk is about as far from a rockstar as one can get.

In mass society, a Pussy Riot beats a Leninist mom every time.

This story was originally published on Global Voices Online.