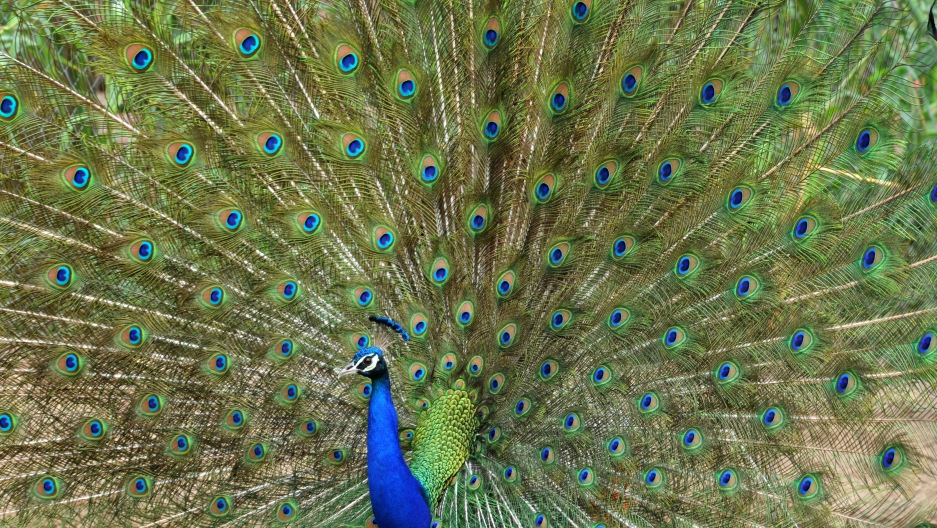 A peacock opens its feathers in a cage in the Nehru Zoological Park in Hyderabad on June 9, 2011. The peacock is the national bird of India. AFP PHOTO/Noah SEELAM (Photo credit should read NOAH SEELAM/AFP/Getty Images)
Credit: NOAH SEELAM
Share

The beaver fur trade was instrumental in the development of Canada’s economy. These woodland creatures are so important to Canada's development, in fact, the country honors them with an unofficial national holiday. National Beaver Day is celebrated in Canada the last Friday of February.

Grasshoppers or chapulines are a Mexican delicacy, popular in Oaxaca and Mexico City. They are sold as snacks at local soccer games and markets. They also inspired the name for popular TV superhero El Chapulín Colorado — The Red Grasshopper.

Dugong are cousins with manatees but are more closely related to elephants. Love struck sailors once found dugong so mesmerizing they dedicated poems and letters to them, claiming the the animals were in fact mermaids. Now these creatures are protected by the government of Papua New Guinea after years of poaching made it vulnerable to extinction.

Looking for a long term relationship? Well the macaw might just be your soulmate. Macaw stay together for life and travel in pairs or with their family groups. They are also really intelligent. They can fashion raw jungle materials into tools.

Iran likes the idea of a national animal so much it has a whole bunch of them, ranging from the Persian cat to the Asiatic tiger. Somewhere in the mix is the surprising mugger crocodile. The mugger kind of looks like an alligator and can be found hanging out in reservoirs and irrigations canals in Iran — yikes! The eyes, ears and nose are on the top of its head, allowing the mugger crocodile to creep on its prey without them getting wet.

The hoopoe are mentioned in many spiritual texts, including the Bible to the Quran. Rocking an awesome mohawk, the hoopoe thrives in human environments and was voted the national bird of Israel during its 60th anniversary celebration.

Now those are some majestic horns. The markhor name means "snake killer" in Persian, which could reference either their habit of killing snakes or their coiled horns that resemble snakes.

Komodo dragons are found exclusively in Indonesia. These dragons are the largest lizards in the world, growing to be 10 feet long and up to 300 pounds. Protected by the Indonesian government, these big guys enjoy life at the top of the food chain on their home island, Komodo.

The Greeks marked their first modern curreny with the phoenix. It symbolized the rebirth of the new Greek state. The Phoenix eventually fell out of favor, however, in 1832 when the drachma replaced it. The Phoenix is basically amazing, its was on Greek coins and in Harry Potter?! What's not to love!

In Hindu mythology, the peacock — or mayura — was created by the feathers of a Hindu god. They were often kept as ornaments in gardens and estates of the elites. Mayuras are said to symbolize the cycle of time.

Dodo birds were found exclusively on the island of Mauritius, off the coast of Africa, until they went the way of the, well, dodo. These flightless birds were tasty and easy to catch. Combined with the introduction of new species, this caused the dodo to go extinct by 1681. The plump bird, however, lives on as the country's national animal.

Perhaps the greatest of all national animals. Sure, they probably don't exist (who can say for sure?). And yes, there's not a unicorn to be found galloping the famed Scottish countryside. But these legendary and fierce creatures are on Scotland’s coat of arms. And their horns are said to have the power to heal sicknesses.