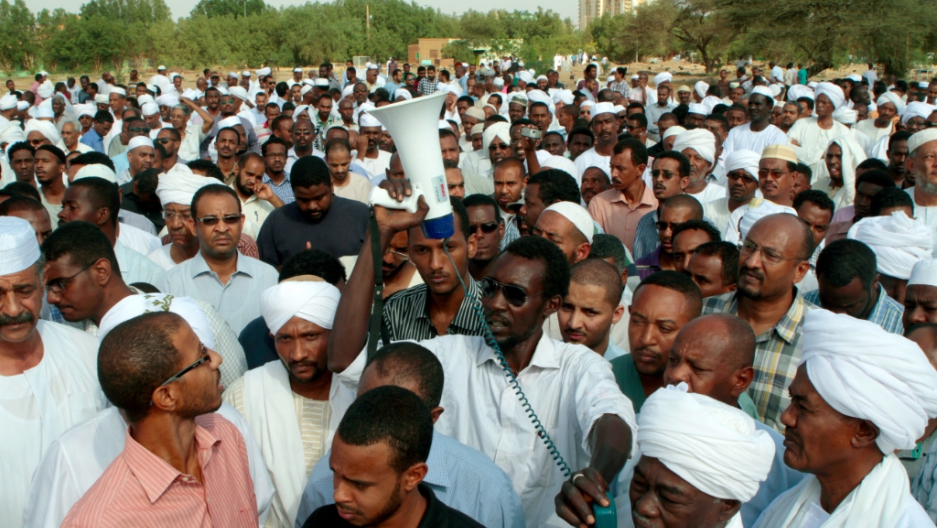 Family members and friends gather for the funeral of Salah Mudahir Sanhuri, 28, killed the day before in clashes following protests in the Sudanese capital Khartoum, on September 28, 2013. Sudanese flooded the streets after Friday prayers yesterday in a fifth day of protests against fuel price hikes that have seen dozens killed, hundreds arrested and calls for the government's ouster.
Credit: ASHRAF SHAZLY
Share

Thousands of angry protesters gathered in Khartoum on Saturday to denounce Sudanese President Omar al-Bashir as a "killer" and call for his resignation in the sixth straight day of demonstrations there, said Agence-France Press.

Sudanese police used teargas several times in an effort to break up the crowds, according to Reuters.

However, activists told the Associated Press as many as 100 people had died. The conflicting accounts could not be immediately explained.

On Saturday, over 1,000 people gathered in Khartoum to bury Salah Mudahir Sanhuri, one of the four killed on Friday, said Reuters.

Three female protesters told the AP that Sudanese security forces fired live rounds into the crowds. The report could not be immediately independently confirmed, but Sudanese activists have been accusing government forces of shooting at will during demonstrations.

"This is a government of thieves who looted the country and starved us," Sanhuri's uncle told the AP.

This week's protests in Sudan were sparked by sudden subsidy cuts, rising fuel and food prices as well as growing disenchament with Bashir's decades-long rule.

The Sudanese leader took power in a 1989 coup.