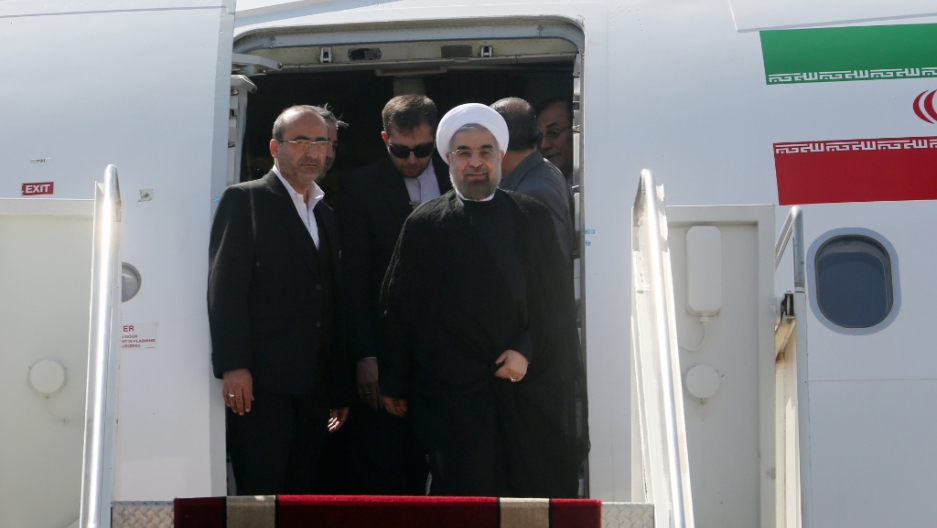 Iranian president Hassan Rouhani steps off his plane upon his arrival at Tehran's Mehrabad Airport, on September 28, 2013. Nearly 60 gathered outside the Airport, chanting 'Death to America' and 'Death to Israel' as his motorcade passed but they were outnumbered by 200 to 300 supporters of the president chanting: 'Thank you Rouhani'.
Credit: ATTA KENARE
Share

Hundreds of people cheered Iranian President Hassan Rouhani as he returned from New York to Tehran on Saturday in a strong sign of support for his new approach to the West, according to Reuters.

About 60 hardliners also gathered to throw eggs and stones at the new Iranian leader's car and shouted slogans like "Death to America!," said BBC News. Reuters said about 100 conservatives were present.

The group was likely angered by Friday's historic phone call between the American and Iranian leaders, a breakthrough after 30 years of diplomatic estrangemet.

"This shows that Iran's place in the world is of critical importance," the semi-official Mehr news angency quoted Boroujerdi as saying, acccording to Reuters. "That the president of America insists on a telephone call is a sign of sincerity," he added.

Rouhani used his trip to New York for the United Nations' general assembly to speak out about his nation's controversial nuclear weapons program and to call for renewed talks on the issue.

How much influence Rouhani will be able to bring to bear on the matter remains to be seen — in Iran, the presidency is greatly limited by the rule of the Supreme Leader.

The United States and many Western nations fear Iran is using its nuclear program to make a bomb, a charge Tehran denies.