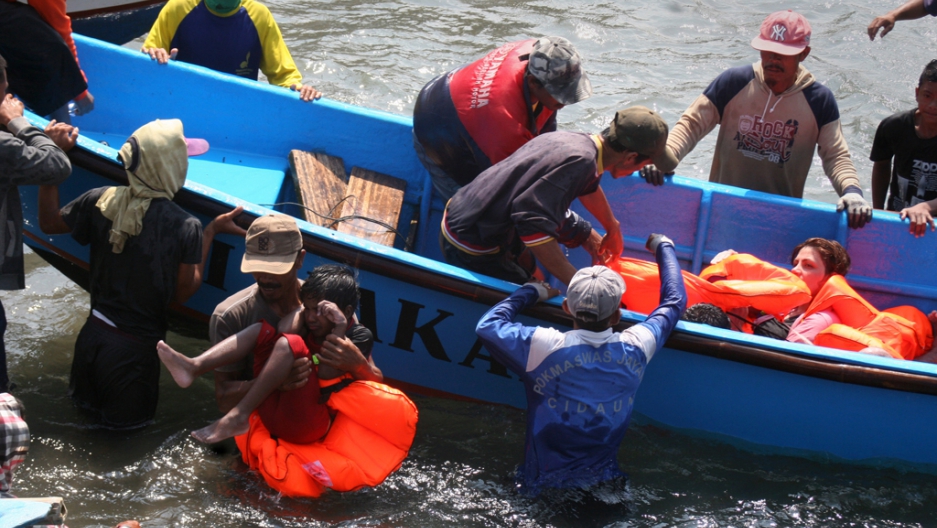 Rescuers assist survivors arriving on fishing boat at the wharf of Cidaun, West Java on July 24, 2013 after an Australia-bound boat carrying asylum-seekers sank off the Indonesian coast.
Credit: STR
Share

The stricken vessel was carrying between 80 and 120 migrants from Lebanon, Jordan and Yemen when it capsized off the coast of Indonesia's main island of Java.

The Associated Press reported that 35 people have been plucked from the water alive, but dozens remain missing, including many children.

"All the passengers were from the Middle East," local police chief Dedy Kusuma Bakti told Reuters by phone. "There were people from Lebanon and Yemen. The boat was going to Australia. Their next destination was Christmas Island."

The Australian government has gone on the defensive over its response to the tragedy. Survivors told the Sydney Morning Herald that they raised the alarm with the Australian embassy at least 24 hours before their boat sank in rough seas.

Survivors told the media they were heading to Australia's Christmas Island when the boat started taking on water in high seas. It was returning to land when it sank about 50 meters off shore, the Australian ABC reported.

Hundreds of boats carrying asylum seekers have come to Australia in the past year, hoping to join the 45,000 migrants that have arrived there since 2007, according to Reuters.

The latest tragedy comes as new Australian Prime Minister Tony Abbott prepares to travel to Indonesia on Monday where the politically charged issue of asylum seekers will top the agenda.

Abbott, who won the national election earlier this month, has pledged to take a tougher stance on asylum seekers arriving in Australia's northern waters by boat.

As part of his border protection policy, Abbot has put the military in charge of turning boats around when safe to do so and sending them back to Indonesia -- a controversial measure that has upset the Indonesian government.