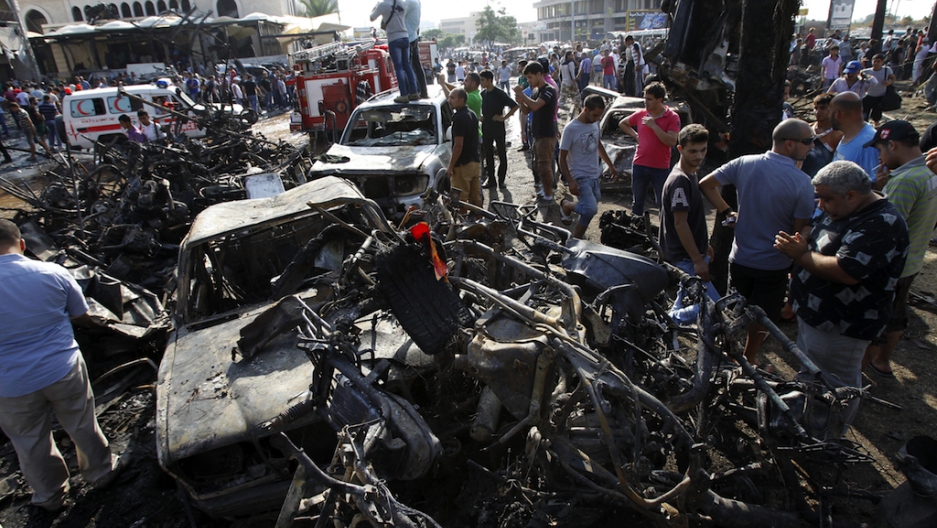 Lebanese civilians gather next to the site of a blast outside a mosque in the northern city of Tripoli on Aug. 23, 2013.
Credit: ANWAR AMRO
Share

BEIRUT, Lebanon — Around the world, smartphone apps are normally designed to make life easier: to count calories, keep in touch with friends, to organize busy work schedules or find the best slice of pizza in an unfamiliar neighborhood.

But in Lebanon, it's a different story. Here, plucky developers are designing apps not only for convenience, but also to keep people safe as spillover from neighboring Syria’s civil war intensifies.

Maa2too3a — branded in English as ‘Happin’ — is a free crowd-sourced application available for iPhones and Androids that allows users to geotag various disruptive events in Lebanon.

On quiet days, its map shows the locations of car accidents and heavy traffic. On others, it’s filled with pins marking armed clashes, protests, roads cut by burning tires and reports of gunfire and explosions.

A screenshot of the Happin app in Lebanon. Credit: The Kernel

“The current security situation made our application — as many of our users have said — a necessity,” said Mohammad Taha, the developer behind Ma2too3a.

Taha got the idea for the app after his wife and 2-year-old son got stuck on a Beirut road when clashes broke out nearby.

“Such violence is not predictable, so you don’t know when something might happen,” Taha said.

With high rates of gun ownership, unresolved hangovers from Lebanon’s 15-year-long civil war and increasing sectarian and political tensions from the war in  Syria, gun battles are a common occurrence in Lebanon. The government’s weak security forces rarely intervene and are often unable to quell violence between armed groups.

And that is just the political violence.

With little law and order, disputes over traffic incidents and arguments can just as quickly escalate into armed clashes. Good results on high school exams, a couple’s marriage and the appearance of a favored politician on TV are all occasions where celebratory gunfire can rattle a neighborhood.

He is currently trying to launch the app in Egypt, where clashes between protesters and police became almost a daily occurrence following the 2011 uprising.

In the future, Taha hopes Maa2too3a might be of use elsewhere in the world, like in cities with high crime rates.

In Lebanon, the stakes are high as the Syria war rages on next door.

“I think it’s pretty obvious to everyone in Lebanon — and outside it — that the security situation has deteriorated significantly in the past few years,” said Najib Mitri, a Lebanese blogger. “Crimes are on the rise, armed clashes can take place anytime, any day, car bombs, kidnappings, an ever increasing rate of gun ownership ….”

More from GlobalPost: The new business of Lebanon: kidnapping

In August, the Lebanese Army launched its own security app. It enables users to report things like kidnappings, potential bomb threats, or drug use by sending out a video, picture or text message to the military. It also sends out notifications about security incidents.

Another app, Way to Safety, is a bit more ambitious. Still under development, the app would use a smartphone’s microphone to triangulate the location of shooters in clashes, mapping the direction of gunfire and identifying the weapons used.

This information, its developer Firas Wazneh says, would allow security forces to respond more readily but also keep civilians out of the crossfire.

“No one should be allowed to fire a gun without being asked for the reasons,” Wazneh said.

The American company ShotSpotter currently uses acoustic sensors in urban areas across the United States and several other countries to identify for law enforcement the locations where shots were fired.

Way to Safety, Wazneh said, would be able to keep prices low by using existing hardware — a user’s smartphone — instead of a costly acoustic sensor system.

To be highly accurate, he said, around 20 users would have to be in the area of the gunfire, though a less precise location could be identified with as few as eight users in the area.

Once the location of the gunfire is identified, the information would be sent out free of charge to users nearby. Wazneh hopes to sell more detailed data — such as the kind of weapons used, or how many shots were fired — to security agencies and media outlets on a subscription basis.

Wazneh is still seeking funding for the app, and said he is unsure when it will be ready to launch.

In the meantime, the Lebanese take their chances.

“Personally speaking,” said Mitri, the blogger, “I was never as worried as I am now about the security situation in Lebanon.”

More from GlobalPost: Lebanon explosions: Is it different this time?