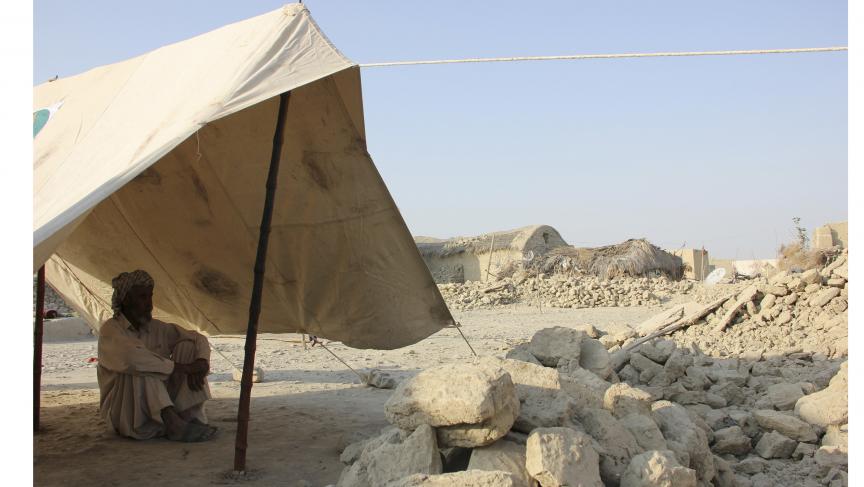 A survivor of an earthquake sits in a makeshift tent near the rubble of mud houses which collapsed following the quake in the town of Awaran, in the south-western Pakistani province of Balochistan, September 27, 2013.

On Tuesday an earthquake of 7.7 magnitude jolted Pakistan's Balochistan region. It was so powerful that it was felt in places as far as India and Dubai.

According to the latest reports, at least 400 people have died and many more have been left without food, water, and shelter.

The Pakistani government has so far not officially requested help from other countries.

The country’s official paramilitary force, the Frontier Corps, has been leading rescue efforts.

But how do aid groups go about helping victims in places where they themselves are under fire?

Chris Lockyear, operations manager for Doctors Without Borders, says his organization is no stranger to delivering aid in conflict zones.

“Our modus-operandi, our way of doing this if you like, is to speak to parties in the conflict and to negotiate our access, our ability to put teams in as close to the conflict as we can, but where we can treat as many people as possible.”

Lockyear says it is important for Doctors Without Borders to get a “safe passage” before sending in their rescue teams.

“[safe passage] is agreement from anybody that could have influence over our security to respect our medical mission and allow us to enter the area unhindered… we’re basically looking for people to tell us that they accept our presence there and for people to respect a neutral and impartial intervention,” Lockyear added.

As for arming their personnel, Lockyear says Doctors Without Borders doesn’t allow it.