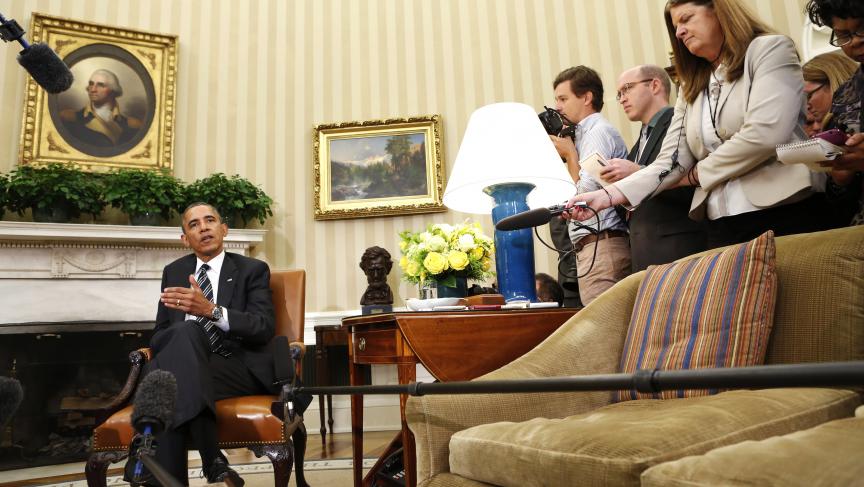 US President Barack Obama speaks to reporters about Syria in the Oval Office of the White House on September 27, 2013.

What's next for Syria may be tied to what's next for Iran. In a surprise appearance at the White House briefing room Friday afternoon, President Barack Obama said he had spoken on the phone with the Iranian president, Hassan Rouhani. It's the first time leaders of the two countries have talked directly since 1979. "We have a unique opportunity to make progress with Tehran," Obama said.

The link is that Iran and Russia are Syria's closest allies. The plan and Security Council resolution for destroying Syria's chemical weapons are moving quickly through the UN. But words work best within an international climate that supports them.

In a phone conversation b/w #Iranian & #US Presidents just now: @HassanRouhani: "Have a Nice Day!" @BarackObama: "Thank you. Khodahafez."

With so many parts to this equation, the White House must be relishing the day's news. It heard that most of Syria's chemical weapons stockpile is "unweaponized." That should make it easier for weapons inspectors to get rid of those banned chemical agents. But there is still plenty to be concerned about.

Even the president is ackowledging that some serious skepticism is in order. "There are legitimate concerns as to how, technically, we are going to be getting those chemical weapons out while there's still fighting going on, on the ground," President Obama said Friday.

He said there are other questions about, "whether Syria will follow through on the commitments that have been laid forth."

Those commitments include a deadline of mid-2014 for destroying all of Syria's chemical stockpile. A senior official with the Organisation for the Prohibition of Chemical Weapons told the BBC in an interview that the timeline was "ambitious" and would be "challenging" to meet. Malik Ellahi said the plan was "an expensive proposition."

Nonetheless, Ellahi was upbeat. He said OPCW staff should be back in Syria by mid-next week. "The international community has come a long way," he said. "We have the capability to verify destruction activities."

Syria presents unique challenges for weapons inspectors. Bashar al-Assad's government has produced one of the largest chemical weapons stockpiles in the world. Even in ideal circumstances, decommissioning it would be time-consuming and costly. And Syria today is hardly an ideal environment, to put it mildly.

"We're talking about a situation in which there's no trust, no confidence," said former State Department advisor on Middle East affairs, Aaron David Miller of the Woodrow Wilson Center. "(Syria) is in the middle of a civil war, which is not going to stop."

What is going on in Syria, Miller said, is "a chemical weapons shell game, in which Assad has probably moved significant amounts [of chemical agents] elsewhere, within but probably not outside of Syria."

It is hard to find experts who express much faith that Assad will move quickly to give up any and all of his chemical weapons. "At the same time, there's a lot of buy-in on this," Miller said.

Two of Assad's most important allies, Russia and Iran, do not want to see even the smallest of US military strikes in Syria. The United Nations Security Council appears poised to bring the weight of international law squarely onto Assad's head. Vladimir Putin has stuck his neck out on this deal to a certain extent.

"You're not going to see the vast majority of Assad's weapons stocks brought under international control, certainly not anytime soon," Miller said. "But you will see progress toward that goal."

Rouhani (or his communication team) tweeted his way through the call with Obama. Some tweets (reproduced here as screenshots) were later deleted from the account.

In a phone conversation b/w #Iranian & #US Presidents just now: @HassanRouhani: "Have a Nice Day!" @BarackObama: "Thank you. Khodahafez."

In phone convo, President #Rouhani and President @BarackObama expressed their mutual political #will to rapidly solve the #nuclear issue.

After historic phone conversation with @BarackObama, President #Rouhani in plane abt to depart for Tehran. #UNGA pic.twitter.com/TFtLWxbbaV