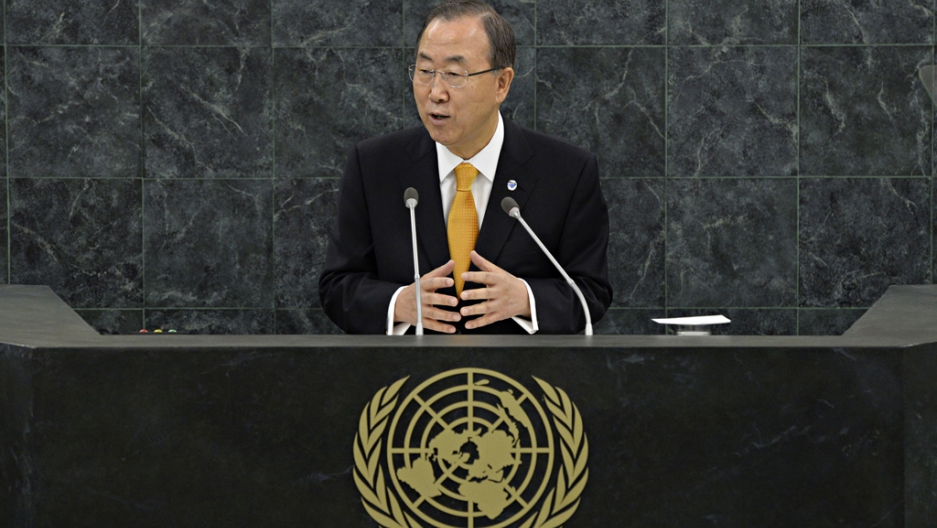 NEW YORK — Politicians in suits, entrepreneurs in jeans and philanthropists, aid workers and journalists dressed somewhere in between descended upon New York City this week for the annual meeting of the United Nations.

And with about 800 days to go until the Millennium Development Goal deadline, conversation around 2015 cropped up everywhere, from cocktail receptions at UN headquarters in East Midtown to rapid-fire panel sessions at the Social Good Summit on the Upper East Side.

Two questions prevailed: What can we do to reach the MDGs by 2015? And what new development goals should come after 2015? That the president of the UN’s 68th General Assembly declared this year’s theme “The Post-2015 Development Agenda: Setting the Stage” only elevated the stakes for discussing the answers.

In order to meet the MDGs, public and private sector advocates at a high-level UN gathering on Tuesday night called for more innovation, more money, and stronger political leadership. To accelerate progress for the goals around child mortality, maternal mortality, and HIV/AIDS, Ray Chambers, UN Special Envoy for Financing the Health MDGs and for Malaria, told the gathering’s attendees, “We have to do things that haven’t been done before.”

But the world almost certainly will not reach MDG 4, the development goal focused on reducing child mortality. The goal calls for a reduction in under-5 deaths by two-thirds from 1990 levels.

In an illustration of just how far the world is from that, a report published earlier this week found that among the 75 countries with the highest number of preventable child deaths, just 17 were poised to meet this target by 2015. In fact, at the current pace, UNICEF estimates we will not reach MDG 4 until 2028.

But that grim prospect does not grate health and development experts as much as one might expect. Even in the face of projected failure to accomplish the goal for 2015, many consider MDG 4 a bright spot in development.

“Child survival in general is a remarkable success story,” Jeffrey Sachs, a special advisor to the UN on the MDGs and a professor at Columbia University, told GlobalPost during a Q&A with journalists in New York. “And where it’s fallen short, it’s mainly because the tools that we have haven’t been applied rather than a lack of tools or a lack of clarity about what to do.”

It is true that there have been major achievements in the fight against child mortality. As GlobalPost’s recent Special Report on the issue details, the world has made significant progress toward reducing child mortality in recent decades. More than 12 million children died in 1990; only 6.6 million died last year, according to UNICEF. The increased availability of vaccines and affordable medicines, along with improved access to health care, have all contributed to saving 90 million children’s lives over the last two decades.

So the fact that we are poised to miss MDG 4 is actually not about failure, Sachs said. That the latest UNICEF child mortality figures show yet another drop in child deaths only underscores the fact that efforts are working, he said.

“The fact that we’re missing it is taken in such odd ways,” Sachs said. “Some people say, ‘See, it doesn’t work!’ That’s absurd. Things are working remarkably well, but they could work even farther.”

This take was echoed by others, including those from countries with the greatest number of preventable child deaths, such as Nigeria – where last year alone, 827,000 children died. Muhammed Pate, the country’s former minister of health, said that work around MDG 4 has been ramped up in Nigeria. Momentum around MDG 4 has helped launch a massive new countrywide initiative, he said, called Saving One Million Lives.

“We will miss the target, but it’s important not to lose sight of it,” Pate told GlobalPost. “Life doesn’t stop at 2015. All this momentum needs to be sustained into whatever it is that comes post 2015.”

The precise nature of that “whatever” – the next stage of global development plans -- is already the subject of heated debate. Beyond 2015, global leaders are pushing to implement new development goals for the next 15 years, including goals to promote women’s empowerment and address energy issues and climate change.

But there are concerns about having too many goals (there were only eight MDGs). Then there’s that fact that a recent study cast doubt on the impact of the MDGs in the first place. That research found that there was no statistically significant acceleration toward meeting the goals since they were formed in 2000.

Authors of a new review on child survival progress, recently published in the British medical journal, The Lancet, urged leaders to keep child survival “at the heart of global health and development goals.”

Save the Children’s CEO Carolyn Miles told GlobalPost that the new target for preventable child deaths should be zero. Progress to date on MDG 4 has been achieved by the lowest-hanging fruit, she said, and future reductions in child mortality will require even more work. With zero as a firm end goal, “that’s going to force you to say, now we’ve got to get the hardest to reach mothers and children,” she said.

There is no doubt that this goal will be a challenge, just as MDG 4 has been.

“It was a long and ambitious target, and we need to recognize that,” Kumanan Rasanathan, a public health physician at UNICEF, told GlobalPost. There has been success toward the goal, he said, but it is important not to rest on past accomplishments. Rasanathan, who is also UNICEF’s point person on the post-2015 agenda, said it is critical to do as much as possible before 2015, and then if efforts fall short, it is critical to look at where we went wrong.

Or, as many others expressed during UN week, where we went right. Save the Children’s Miles stressed the importance of examining the success stories in health – such as Bangladesh and Ethiopia.

“These are very poor countries. What is it that those countries are doing that have helped move the needle?”

More from GlobalPost: Step by Step: The Path to Ending Child Mortality