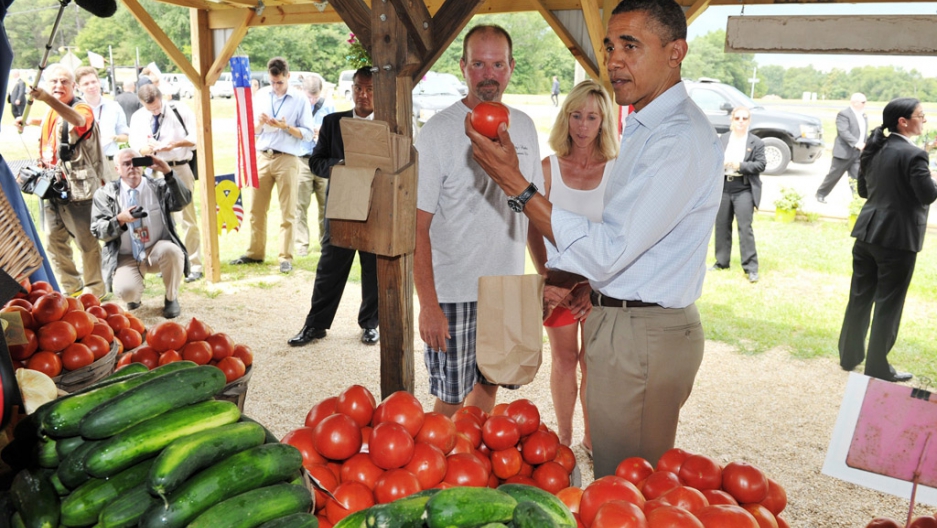 US President Barack Obama hold up a tomato during a stop at Berry's Produce on July 14, 2012 in Mechanicsville, Virginia. Obama is campaigning in Virginia ahead of the November presidential election.
Credit: MANDEL NGAN
Share

A new potato-and-tomato bearing plant known as the TomTato is taking root in the United Kingdom thanks to a cheeky garden joke from America, according to Britain's Independent.

While British horticulturist Paul Hansord was visiting the United States 15 years ago, he was jokingly shown a potato planted under a tomato. Apparently, he didn't think it was all that silly, because now his Thompson & Morgan company is selling a new plant able to produce both at once, said the Independent.

Screengrab from Thompson and Morgan.

"The TomTato has been trialled for several years and the end result is far superior than anything I could have hoped for, trusses full of tomatoes which have a flavor that makes shop tomatoes inedible, as well as, a good hearty crop of potatoes for late in the season," Hansord, the horticultural director for Thompson & Morgan, told the Independent.

And no need to feel weird about eating the yield, because the TomTato is the product of the old-fashioned graft method — meaning two plants spliced together and grown as one — rather than the product of genetic engineering.

Guy Barter of the Royal Horticultural Society told BBC News he is eager to try the TomTato.

While some gardeners may be skeptical about the hardiness of new hybrids, Barter said grafting methods have improved greatly in recent years, observing that the new plant will appeal to those who "don't have that much space in their gardens."

The double-yielding horticultural wonder, said to produce over 500 cherry tomatoes and a bunch of white potatoes, took Hansord decades to perfect.

"It has been very difficult to achieve because the tomato stem and the potato stem have to be the same thickness for the graft to work," he told BBC News, describing it as a "very highly skilled operation."

The plant can be grown indoors or outdoors, lasts one season, and costs about $24, said CBS.

It is available through the Thompson & Morgan gardening mail order firm. Watch their promo video on it here: