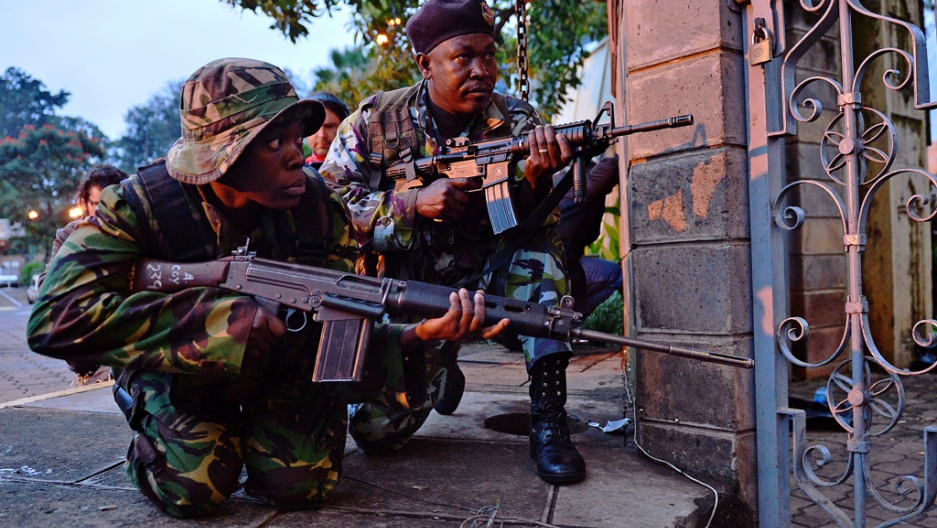 Kenyan soldiers take cover after heavy gunfire near Westgate mall in Nairobi on September 23, 2013. Kenyan Defense troops remain inside the mall, in a standoff with Somali militants after they laid siege to the shopping centre shooting.
Credit: CARL DE SOUZA
Share

NAIROBI, Kenya — Days after the end of the Westgate Mall siege, many people are wondering what exactly happened. But there are very few answers.

How many attackers were there? What happened to them? How did the siege end?

Here are a few of the key “known unknowns,” to borrow from former US Defense Secretary Donald Rumsfeld.

“That is to say, there are things that we know we don't know.”

1. How many people died?
The official death toll is 61 civilians and six security officers (police and army). Interior Minister Joseph Ole Lenku said there are an “insignificant number of bodies left in the mall.” But he’s just guessing.

No one actually knows how many bodies are under the rubble of the partially collapsed building because no one has started looking yet. Bomb disposal teams are still working to clear the building of any leftover or booby-trapped explosives. Forensic investigators cannot begin their work sifting through the rubble until the building is cleared.

However, the Red Cross said Friday that 59 people are still missing, and that it had not yet been allowed to access the shopping center to begin removing bodies.

2. What happened to the terrorists?
Kenyan government officials, including the president, have repeatedly said there were 10-15 gunmen involved in the Westgate Mall siege. Officials say five were killed during the operation, but have yet to provide evidence to back up the claim.

Even so, that leaves 5-10 militants that are unaccounted for. They may eventually be found under the rubble, along with the bodies of the hostages they terrorized. But several eyewitnesses and survivors of the attack say some of the attackers changed clothes inside the mall, and escaped during the early stages of the assault.

Right now, Kenyan authorities are questioning eight people in connection with the attack. But none of them are suspected of being among the militants that carried out the siege.

3. Who or what caused the building to collapse?
On Monday, there was a series of very large explosions, and a thick plume of smoke rose into the sky for many hours. Interior Minister Ole Lenku said the terrorists inside the mall had set mattresses in a supermarket on fire to “distract” the soldiers. The government line is that the fire weakened the mall’s four-story structure, causing it to collapse on top of the attackers — and in a development that helped end the siege.

There are strong indications, however, that it may have in fact been maneuvers by government forces that brought on the partial collapse of the building. An unnamed official told The Associated Press Friday that it was military action on the part of government soldiers that caused the collapse, but also added that the attackers had fired rocket-propelled grenades inside the building.

There are many more questions, in fact 85 in total according to this list crowd-sourced in Kenya.

Number 24 on the list is, "Are all our questions actually going to get answered?" The answer, unfortunately, is likely to be no.