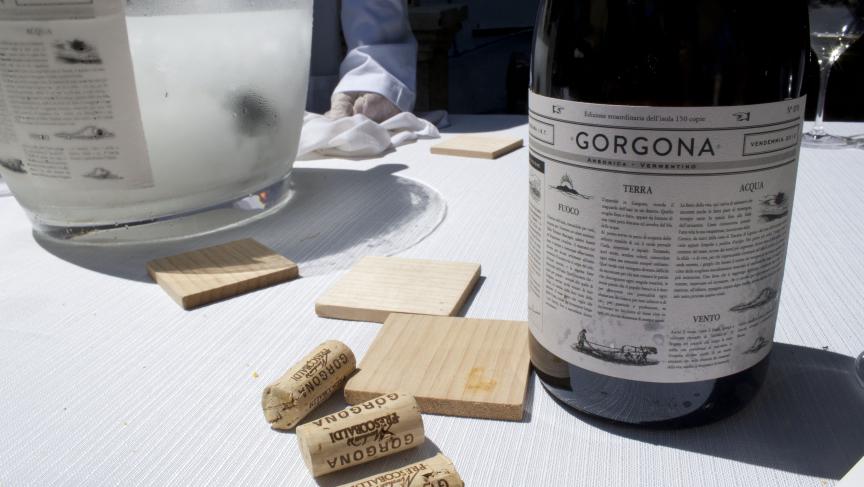 A bottle of the new Gorgona wine

Waves crash against the worn-down ferry, seagulls soar above, and the air smells of salt. The view is spectacular. Just ten minutes into the ferry-ride from the Tuscan coast of Livorno, you can already see the giant mound in the distance.

Gorgona Island. You forget you are about to reach a maximum-security prison, at least until they take away your cell phone and passport.

Gorgona could very well have been a tourist destination. It housed hermits in ancient times, and fed wealthy landowners since the Renaissance, until the newly-formed Italian nation converted it into a kind of Montecristo for felons. This was over a century ago. Today, Gorgona is a completely different kind of penitentiary.

Following its winding hillsides, past chipping buildings perched above blue shores, I arrived at the very top. There I found three acres of vines, and the inmates who work them.

I tapped one inmate on the shoulder. Under the Tuscan sun, you forget that these men are still in prison, that they have probably killed someone. Of course, some are still a bit rough around the edges. But others have become real vintners.

Convicts walked up and down rows of vines, pulling weeds and twisting green curlicues. As a journalist in Italy, I’ve visited many vineyards, and this one was no different.

What they make is a fruity, crisp white. Wine experts say it carries the typically intense character of island wines, caressed by the smell of the sea and threatened by its very saltiness. Like the prisoners in their spare time, these vines had to flex some muscle to bring fruit. But is it worth $100 a bottle?

Had I not been offered, I probably couldn’t have afforded a taste. Gorgona’s benefactor and 30th-generation wine maker, Marquise Lamberto Frescobaldi, dubbed the wine as “decently expensive.”

If you think of the wine as a message in a bottle from men who have made grave mistakes and are asking for a second chance, then I think Frescobaldi has a point. After all, there are those who are willing to pay the price for a nice goblet attached to a good cause. For everyone else, they’ll certainly give it some thought before popping it open.