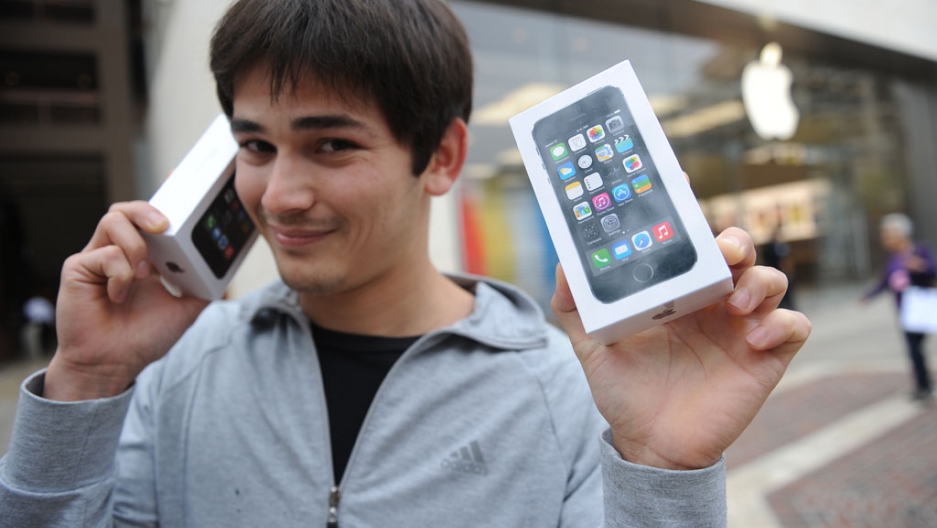 Kerim Muhammet poses with his two new Apple iPhone 5S models after waiting in line overnight in Glendale, California, on September 20, 2013. Apple launched two new models of the iPhone today, the iPhone 5S, which is an updated version of the iPhone 5, and a less expensive iPhone 5C.
Credit: ROBYN BECK
Share

$13,000 in cash, bitcoins and booze — it’s enough to motivate any hacker to work through the night to crack a piece of hardware or software.

Apple released its new biometric technology as part of the latest incarnation of the iPhone, the 5S, just last week. The company asserts that the phone's built-in fingerprint scanner is one of the most useful and secure methods for protecting information contained on user devices — a major sell in a world of increasing cyber threats.

“Your fingerprint is one of the best passwords in the world. It’s always with you and no two are exactly alike. So it made perfect sense to create a simple, seamless way to use it as a password,” Apple’s Senior Vice President of Hardware Engineering Dan Riccio said.

But critics say that claim ignores the fact that no person can control giving away their fingerprints, which mark everything they touch throughout the day. After Apple's announcement last week, one micro venture capital firm immediately heeded the challenge of proving the legendary tech company wrong.

It only took a few days.

As soon as security researcher Nick Depetrillo spread word online of the prize he was offering for cracking the iPhone scanner — a combination of cash, booze, and the virtual currency Bitcoin — members of Germany’s Chaos Computer Club (CCC), a legally recognized hacker association, sprang into action engineering their way around Apple’s biometric technology.

Robert David Graham, a security researcher at Errata Security, later joined Depetrillo in sponsoring the purse — $14,609, 8.151159 bitcoin, and bottles of Argentine wine, Maker's Mark bourbon and other liquor — for the winning hackers.

The CCC quickly figured out how to use high resolution photographs of fingerprints to trick biometric scanners into unlocking iPhones. That should be a lesson to the public about the myth of biometric security, according to CCC spokesperson Frank Rieger.

"We hope that this finally puts to rest the illusions people have about fingerprint biometrics. It is plain stupid to use something that you can't change and that you leave everywhere every day as a security token," Rieger said.

"The public should no longer be fooled by the biometrics industry with false security claims. Biometrics is fundamentally a technology designed for oppression and control, not for securing everyday device access."

Hackers and technology geeks aren’t the only individuals expressing concern over the use of biometrics for security. Last week, Senator Al Franken sent an open letter to Apple executives in which he expressed his own concerns about the potential pitfalls of biometric scanning.

“Passwords are secret and dynamic; fingerprints are public and permanent. If you don't tell anyone your password, no one will know what it is. If someone hacks your password, you can change it — as many times as you want. You can't change your fingerprints. You have only ten of them. And you leave them on everything you touch; they are definitely not a secret. What's more, a password doesn't uniquely identify its owner — a fingerprint does. Let me put it this way: if hackers get a hold of your thumbprint, they could use it to identify and impersonate you for the rest of your life,” wrote Franken.

This revelation is the third security fault discovered in Apple’s latest operating system after iOS7 was released last week. Hackers have found that the operating system's control center feature could be used to gain unauthorized access to user photos and emails. Others have succeeded in using the emergency call screen to place calls to any number — not just emergency hotlines.