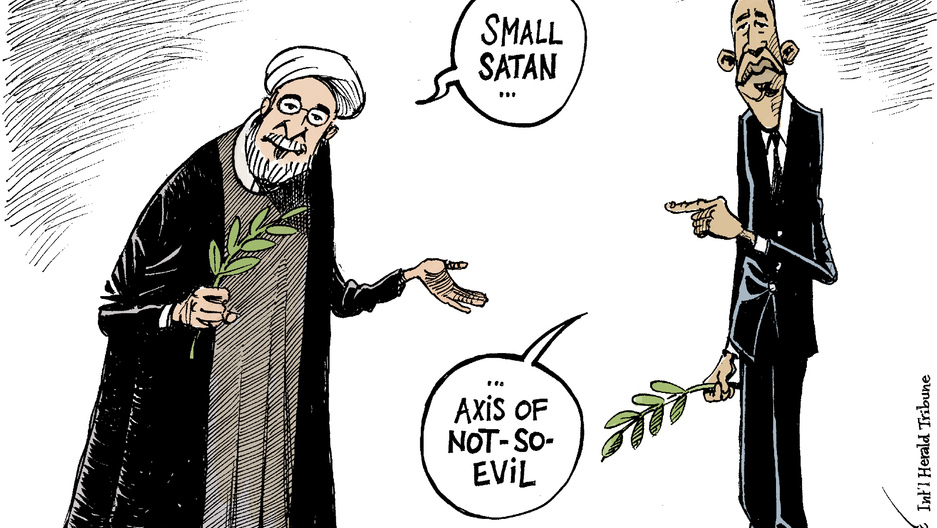 The toned down rhetoric of Barack Obama and Hassan Rouhani as they take some itsy, bitsy steps toward a US-Iran rapprochement. Cartoon by Patrick Chappatte of Switzerland for the International Herald Tribune.

Do you sometimes find your pasta is, well, a little bit too straight? Even when you boil it? Perhaps you should consider changing the brand.

Heres’ what else we’ve been looking at, at PRI.org:

The woman who walked toward Westgate

"The mall soundtrack with pop music continued to play, but otherwise (there was a) sort of eerie silence; bursts of gunfire"

Kenya is entering its third and final day of national mourning after the Westgate mall attacks, and still more stories are emerging of the horror that took place inside.

The BBC has one of the most memorable accounts of the mayhem from reporter Nichole Sobecki, who embedded herself with security forces clearing shops.

A short guide to talking s**t (And no, you can't say that on the radio)

The usually po-faced London Review of Books has been taking great pleasure in examining the global history of verbal obscenity — via a new book, of course. And if that isn’t good enough for you - you slabberdegullion druggels - then just eat my dripping ninnie-hammer flycatchers.

Some Saudi Arabian women say it's time for the government to throw its ban on women driving out the window — and they're pushing the accelerator with an online petition and a day of protest. As Slate reports, women are planning a protest drive on Oct. 26.

Justice for the princelings

The Economist looks at how China’s ‘princelings’ — the privileged offspring of the country’s wealthy elite — have become a lightning rod for wider social discontent.

Trading up? Why more Americans are renouncing their nationality

According to figures from the Federal Register, more Americans than ever are renouncing their US citizenship and trading up to an improved, alternative nationality.

The BBC’s Magazine has been looking into why so many people are voting with their passports.

We dare not supply a title

The New Statesman’s Robert Hutton reveals a highly entertaining project to catch, log and tag every journalistic cliché available for the benefit of posterity. Well if it walks like a duck...

The wild weather in Australia continues, with brushfires raging. A new report links the early onset of severe fires to climate change.

This post is a new feature of PRI.org. It's a daily brief and email newsletter of stories, events and graphics that are catching the attention of our news staff. The World's Leo Hornak kicks it off from London and various folks on our editorial team around the globe contribute from there, like Cartoon Editor Carol Hills in Boston. Don't expect anything near the standard wrap of major news stories. This blog post and its email companion will be as idiosyncratic as our staff... and we'll want you to tell us what you like and don't like. Sign up for a PRI.org account and subscribe to our newsletter to get it delivered to your inbox. Future updates will arrive during the US morning hours.