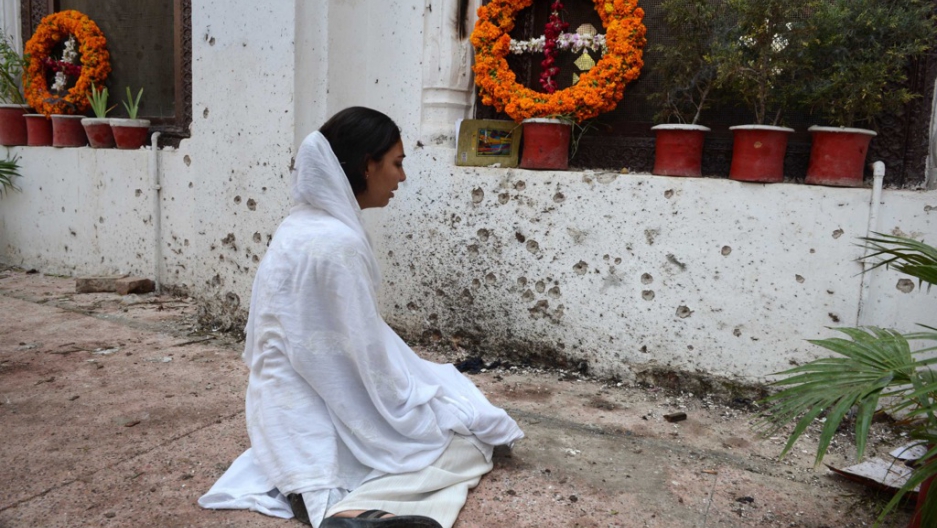 A Pakistani Christian woman mourns the death of a relative killed in a suicide bombing near damage at the All Saints church in Peshawar on Sept. 24, 2013. A devastating double suicide attack on a church in northwest Pakistan has triggered fears among the country's beleaguered Christian community that they will be targeted in a fresh wave of Islamist violence.
Credit: A. Majeed
Share

KARACHI, Pakistan — Just hours after a bomb killed at least 80 people leaving mass at a church in the northwestern city of Peshawar, I received a disturbing text message.

In Pakistan, mass text-messages are used to spread all kinds of information. People I barely know have texted me about everything from political killings to religious holidays. During this year's landmark elections, text messages were a crucial tool for informing voters about poll safety and hours.

Were it not for one word, the message I received Sunday wouldn’t have caught my attention; it asked everyone reading it to recite a line from the Quran that condemns senseless violence. But the message made a pointed omission, specifying that recipients should recite the line for the "peace of all Muslims everywhere."

No mention of Christians.

Though they were the targets of this past weekend's attacks, I heard many comments over the following two days that similarly dismissed this minority group.

A cigarette vendor told me Christians are making themselves vulnerable by going to church. "It's not like I spend a lot of time at churches in Pakistan," he said. "They're there, and Christians go there. But they're very easy targets since only [Christians] go to the churches. We shouldn't have to increase security, they should find new places of worship."

The ruling party's cabinet is currently coming up with a plan to make churches and other minority places of worship more secure, after Prime Minister Nawaz Sharif condemned the weekend bombing. An official police investigation into the attack in currently underway.

Still, in February, when bombs in Quetta targeted Hazara Shiites and left more than 80 dead, Karachi’s public had a far more pronounced sympathetic reaction. The city was shut down for days.

I can’t say if the muted reaction to this latest bombing is because we're all so tired of the violence, or because most Pakistanis are less concerned about the Christians among them — but I suspect both forces are at work.

A motorized rickshaw driver told me it's unnecessary for people in Karachi to protest the attacks. "This is a Muslim country," he said. "[The victims] are not Muslim."

I asked him about Shiites, who are Muslim but also a minority group in Pakistan. "I too am Shiite," he said. When I pointed out that Shiites have been victims of terrorist attacks, he shrugged. "We're Muslims so we are guaranteed protection" by the state, he said. "[Christians] are not."

The website of Pakistan's leading English language newspaper published a blog in response to the Peshawar bombing. In it, a Karachiite Muslim author lamented that he now fears for his life and will no longer be able to take pleasure in visiting the city's landmark churches, some of which were built before Pakistan was even a country.

His blog made no mention of the thousands of Christians in Pakistan who will no longer attend religious services, focusing instead on the architectural masterpieces Muslims can no longer safely enjoy.

That's not to say that everyone believes Christians have asked for the violence that's come their way. After last weekend's violence, protests from Christians and Muslims alike erupted in the streets of most of Pakistan's major cities. In Karachi, on the day of the attack, many took to the city's major thoroughfares, burning tires and blocking traffic.

At the same time, however, in another part of Karachi, Christian protesters clashed with Muslims. Shots were fired, and five people died.

"It's terrible that Christians in Peshawar were bombed," said my neighbor. "But that's not a reason for them to have attacked Muslims. Honestly, this kind of violence is only going to beget more violence."

A friend owns a shop near Karachi's St. Patrick's Cathedral, she added. "Can you imagine how this will affect his business?"