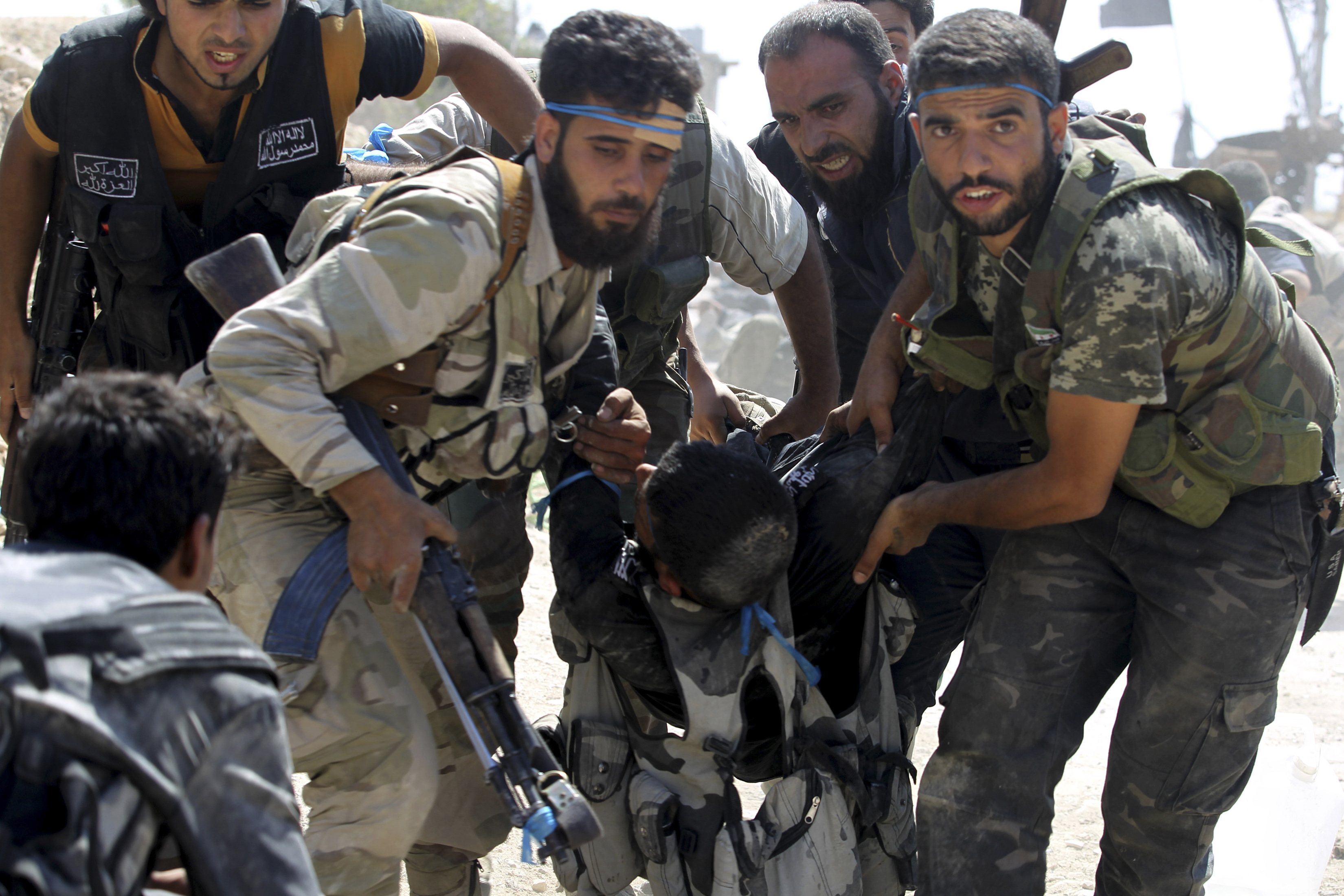 Free Syrian Army fighters carry a fellow fighter after he was wounded on the front line in Aleppo's Sheikh Saeed neighborhood, Sept. 21, 2013.

A group of 13 Syrian rebel groups has released a statement calling for an Islamic state in Syria and declaring independence from the western-backed Syrian National Coalition.

The groups include the powerful al-Qaeda linked Al-Nusra Front, along with members of the western-backed Free Syrian Army. In the murky and ever-shifting universe of Syrian opposition groups, it's too early to say what kind of an impact this new coalition will have on the ground in Syria. In fact, the 'coalition' appears to only exist on paper at this point — it doesn't even have a name yet. But this is not good news for the moderate Syrian opposition groups the Obama administration has talked about supporting.

The episode highlights an old fissure that runs through the Syrian opposition. "There's always been tensions and a clear difference between the opposition inside (the country), primarily represented by the militant brigades," said Amr al-Azm, professor at Shawnee State University in Ohio and a member of the Syrian opposition. "And then, you have the political opposition, which is primarily represented by the exiles based outside Syria."

Beyond the internal-external split though, the timing here is important too. Syrian National Coalition leaders have been talking this week with Secretary of State John Kerry in New York and there is anticipation about a new negotiation effort being announced soon. "Suddenly, there is a scamble for who gets to sit at the negotiating table," Azm said. The brigade commanders in Syria, he added, want to send a message right now.

"They don't want the political opposition to hijack this process," he said.

Who are these rebel groups and what does their declaration mean? Aron Lund has a brilliant analysis.

Another thing about the timing of this announcement: it comes at a time of escalating violence between al-Qaeda-linked rebels and their more moderate rivals, even though both groups — broadly speaking — share the same goal of defeating the forces loyal to the Syrian regime of Bashar al-Assad. "It's the hardest fighting we have ever seen between Salim Idriss's elements of the Free Syrian Army and the Islamic State of Iraq and the Levant," an unnamed US State Department official was quoted as saying today by Reuters. The official was referring to Idriss, the military commander of the Supreme Military Council (SMC) of the FSA and the main al-Qaeda affiliate operating in Syria, which is also known as ISIS.

Groups like ISIS, an al-Qaeda-backed group, have turned parts of northern Syria into a violent nightmare and changed the nature of the fighting from a revolution to a sectarian conflict.

" ...half of the fighters in the FSA believe they are fighting a war against the Alawites, and more generally against the Shiites, as a result of Bashar’s alliances with Iran and Hezbollah. They are simple young men, from the poorer classes. They have no education, and the weapons have gone to their heads. They have become cruel. Killing has become ordinary. They only want their enemy’s blood. We took to the streets for freedom and dignity, not to substitute the regime with another regime just as bloodthirsty.”

Things have become so bad in Syria that rival Islamist groups are even going after each other, as Michael Weiss puts it on the website, Now.

In a just world, it would fall to Lewis Carroll rather than your humble servant to explain why moderate rebels would align with al-Qaeda in order to close ranks against al-Qaeda. The last fortnight has produced so many new declensions in a conflict defined less and less by a common struggle to dislodge a dictator and more and more by a race to cannibalize that common struggle. It really is useless to refer to any such thing as the Syrian civil war when FUBAR more adequately characterizes what’s happening now. It’s obvious enough to say that this all benefits Bashar al-Assad enormously. And yet, there’s an important context, or conspiracy, to the latest state of chaos, and it all began with a principal chaos merchant: Ayman al-Zawahiri.

In the short term, the creation of this new "Islamic coaltion" will weaken the US-backed SMC, because three of its most capable units joined up with it. "On the other hand, it could make in the coming days, a clean break," said Andrew Tabler of the Washington Institute for Near East Policy. "Because the role of (Islamists) in the SMC was becoming contentious as the situation on the ground in Syria towards the right end of the political spectrum, towards [the Islamists] and the extremists."

Tabler believes the west's failure to take action in Syria has helped create a power vaccuum that extremists like ISIS have only been too willing and capable to fill. But he also argues that this recent split between hard-line Islamist units and the more moderate opposition brigades could present an opportunity for Washington. A clean break, so to speak, could help the Obama administration get over its wariness of funding a myriad of Syrian opposition that includes extremist elements. Tabler writes more on that here.

Syrian opposition leaders who met with Kerry have canceled a news conference that was supposed to happen in New York on Thursday morning.