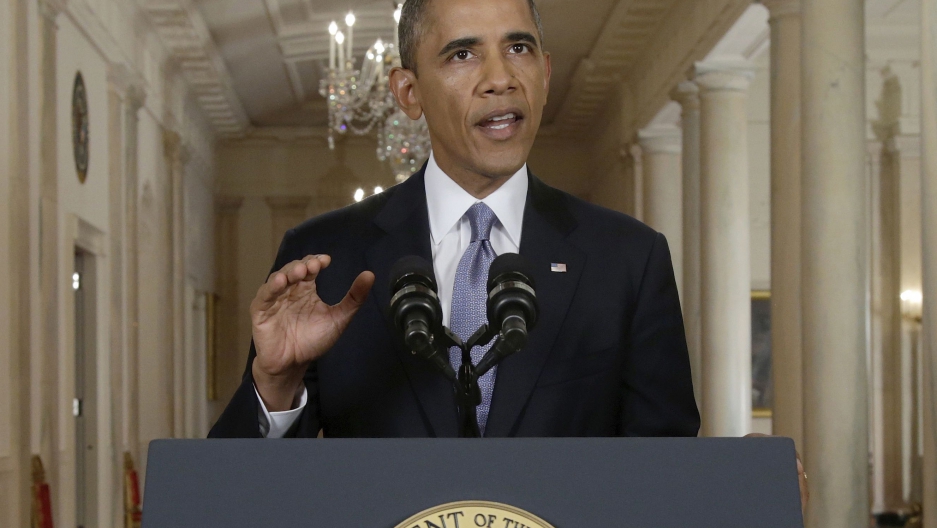 President Barack Obama addresses the nation on Syria in a live televised speech from the East Room of the White House on Sept. 10, 2013 in Washington, DC.
Credit: Pool
Share

On the same day President Barack Obama addressed the United Nations General Assembly on Syria and Iran, a new poll shows more Americans disapprove than approve of how he is handling foreign policy decisions.

A CBS News/New York Times poll published Tuesday evening shows 44 percent disapprove, while 39 percent approve, of how the US president is engaging with Iran. The poll was taken before Obama made his speech at the UN.

When it comes to Syria, including the possibility of a military strike, Obama got low ratings.

52 percent disapprove of how the president is handling the crisis in Syria, while only 37 percent approve.

However, there is tremendous support for a proposed US-Russian deal for Damascus to give up its chemical weapons.

82 percent of Americans back the deal, while only 15 percent opposes it. Yet when asked, only 66 percent felt it was likely Syria would hand its stockpile over.

49 percent of those polled disapprove of how the commander-in-chief is handling foreign policy overall.

On Tuesday, US Secretary of State John Kerry met his Russian counterpart, Sergei Lavrov, at the UN in an attempt to hammer out a resolution on Syria that both sides will agree to.