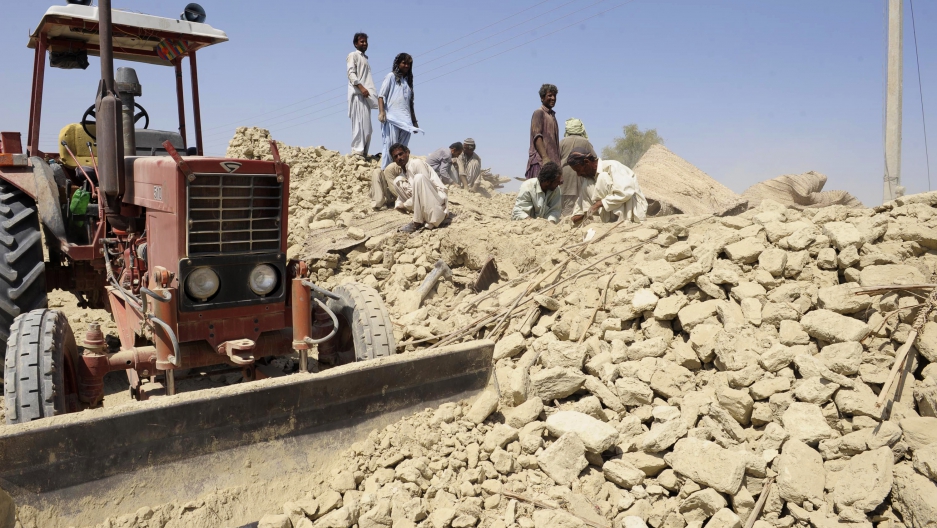 Pakistani earthquake survivors search through the debris of their collapsed houses in the devastated district of Awaran on Sept. 25, 2013.
Credit: Banaras Khan
Share

The massive 7.7 magnitude earthquake that struck southwestern Pakistan on Tuesday has killed at least 327 people, according to officials.

In addition, at least 350 people were injured, but that number and the death toll will both likely rise as military and rescue workers dig through the rubble to save those trapped under mud homes and other wreckage.

"Two hundred and eighty five bodies have so far been recovered in the Awaran district," Abdul Rasheed Gogazai, the deputy commissioner of Awaran, told Reuters. "And 42 bodies were found in the neighboring Kech district."

It's the worst earthquake in the nation's history since 2005, when some 75,000 people were killed in the country's north. This past April, a 7.8 magnitude earthquake near Pakistan's border with Iran killed 41 people and affected more than 12,000 in Pakistan's Baluchistan province.

"A total of six districts — Awaran, Kech, Gwadar, Panjgur, Chaghi and Khuzdar — and a population of over 300,000 have been affected by [Tuesday's] earthquake," Jan Muhammad Buledi, spokesman for the Baluchistan government, told Agence France-Presse.

In a strange turn of events, the quake also created a small island off the coast.

It raised a mass of land about 25 feet from the Arabian Sea, forming a small island about 1 mile off the coast of Gwadar, according to GEO TV.

"The island, which is up to 100 feet high and 200 feet wide, surfaced after the earthquake hit parts of Baluchistan," senior local administration official Tufail Baluch told AFP.

Here are pictures of the island:

Here's the island that rose from the sea after #Pakistan earthquake. It is 200m long, 100m wide and 20m high. pic.twitter.com/RHFtEf0ygh