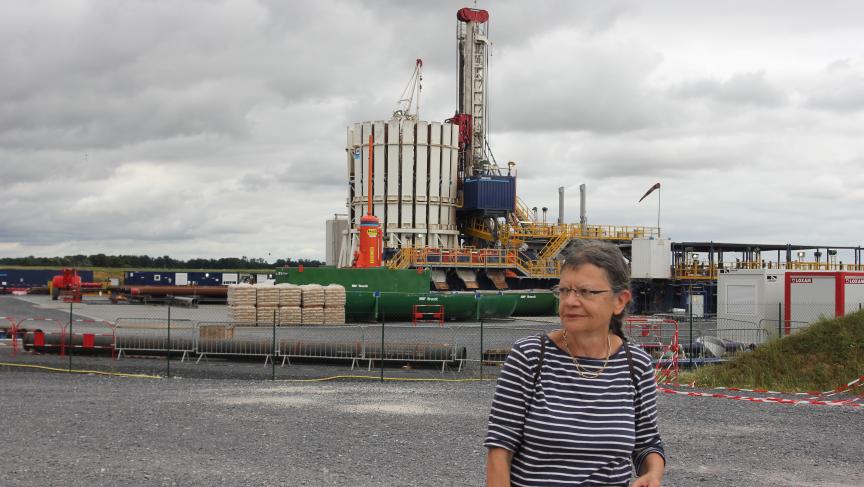 Two years after France became the first country to ban fracking, the country’s constitutional court is considering a challenge to the law. The case comes amid uncertain signals from the government of President Francios Hollande on whether or not it will continue to support the ban.

Forever is a long time.

Back when it was passed in 2011, many thought the ban would be the final word on fracking in France. The controversial method of injecting water, chemicals and sand deep underground to produce shale gas and oil would never be used here.

Instead, shale gas, or gaz de schiste, is still a hot topic, in large part because an American drilling company is challenging the ban in France’s Constitutional Council. Hearings began on Tuesday on whether parts of the law that bans fracking are unconstitutional.

The challenge comes from Dallas-based Schuepbach Energy. The company didn’t respond to a request for an interview, but in a nutshell, Schuepbach says the anti-fracking law isn’t equally applied, and it wrongly stripped the company of exploration licenses it already held.

Thomas Porcher, an energy economist in Paris, and author of the book “The Mirage of Shale Gas”, says the case is highly unusual.

“We are not used to a company that try to change the law like that in France,” Porcher says.

But Porcher says in this case the oil and gas industry is lobbying hard against the law.

If the court does strike down the ban, Porcher says the French government will most likely just pass another fracking law that would pass constitutional muster.

Indeed, opposition to fracking would seem to be bipartisan here. The law was signed under former conservative president Nicolas Sarkozy. Current Socialist President Francois Hollande came into office last year supporting the ban, and earlier this year he stood by his commitment, telling French television that as long as he was president, there would be no exploration of shale gas in France.

But of course it’s not so simple. A growing chorus of lawmakers is questioning the ban, and a recent parliamentary report said it should be relaxed. Even Hollande’s own Industry Minister has come out in favor of some kind of shale gas and oil production.

And Hollande’s former Ecology Minister claims she was fired because of her strong opposition to the industry.

Given the political division, anti-fracking campaigners believe oil and gas companies are already planning for the ban’s demise.

Among these activists is Isabelle Levy, who brings a reporter to a new drilling site on a stretch of farmland about forty miles outside Paris that she says could be prime real estate for fracking.

The site standing out over the fields is operated by another American company, the Hess Corporation. In a statement to The World, Hess said it’s merely drilling a conventional exploration well. But Isabelle Levy doesn’t buy it.

“This is a lie,” Levy declares. “If the law doesn’t exist, this machine will be there in the right place, so they will frack.”

Hundreds have protested at the well site.

Ban Is a “Missed Opportunity”

Jean-Louis Shilansky, head of the French Union of Petroleum Industries, says the ban “is a missed opportunity for the country. And at the end of the day we cannot afford missing it.”

Shilansky says the industry wants the freedom to experiment with fracking to find out just how much shale gas and oil France has.

“And hopefully the ban could be reversed,” he says. “Or at least that’s what we want.”

But energy economist Thomas Porcher says the industry still has to contend with French public opinion, which largely shares his caution towards fracking. A recent Harris poll showed less than a third of respondents support drilling for shale gas.

Porcher says France learned a lesson nearly half a century ago when it plunged headlong into nuclear power.

“We know that when we make a choice about energy, we have to live with the choice for a long time,” Porcher says. “That’s why now we take a little bit of time to go in fracking, because we don’t want to regret it, as I think we regret the nuclear.”

Porcher says France should focus instead on renewables and energy efficiency, an area where the country has lagged behind many European neighbors.

France’s Constitutional Council is due to rule on the ban on fracking next month.