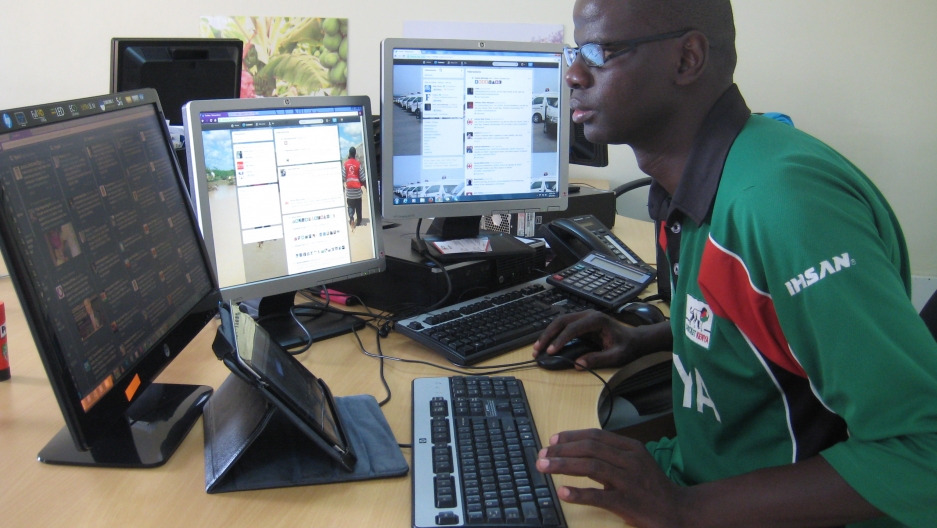 Ogola runs the Kenya Red Cross's social media command center, a cluster of computer screens at Red Cross headquarters in Nairobi. It's where I visited him earlier this month, before the attacks.

In the last year, Ogola has turned Kenya Red Cross social media into a virtual 911, taking in information about emergencies and putting out public safety bulletins, 24 hours a day.

“The information I get online, it's amazing,” says Ogola. “You get the exact location of where the incident is, you get photos, how many people injured, where, and how far. Previously it was really hard.”

Ogola says he has helped coordinate response to hundreds of emergencies, liaising with social media users on the scene and emergency services countrywide. All with the help of ordinary Kenyans on their mobile phones.

“Kenyans thought, 'Whoa, I can actually save someone's life with a touch of a button,'” he says. “And it went viral.”

Here's how it works: you see an accident, a shooting, or a fire; you tweet, or Facebook, or text Kenya Red Cross. Ogola does a cloud search, scanning social media for photos, location tags or other information on the same incident. Within minutes, he hands it over to first responders on the ground.

Kenya's public emergency services are notoriously threadbare. What started as a small fire at Jomo Kenyatta International Airport this summer gutted a terminal before firefighters got it under control. There's no national 911-type number for medical crises, and no comprehensive national disaster plan.

But thousands of Kenyans are plugged into Red Cross social media, through their mobile phones and tweet-to-text services. In emergencies, often, the Red Cross is their first call.

“Even the government sometimes falls back on us instead of having their own systems in place,” says Joanne Gitau, an ambulance dispatcher for Red Cross EMTs, “especially when the emergencies occur on a really large scale.”

The terror attack on the Westgate mall was Kenya's biggest crisis since the 1998 embassy bombings. Red Cross, and social media, have been on the front lines. Over Skype a few days after the attacks, Philip Ogola told me about people who were trapped inside, tweeting the Red Cross for help.

Ogola set up a hashtag, #RedCrossTrace, to help match tweets from Westgate with worried loved ones outside. From his iPad at the triage station outside the mall, he put out updates about casualties, first aid, missing persons, and counseling services, and helped organize an unprecedented nationwide blood drive.

Now, Twitter has been buzzing with posts calling him a hero. He says he couldn't have done it without social media.

“It would have been totally impossible to comprehend the situation on the ground, to know the needs of the people, to actually even publish information of what we need. It was easy for me to tweet and say, 'Hey guys, we need syringes, we need gauzes, we need water.' And the ripple effect was instantaneous.”

Kenya Red Cross has more than 100,000 followers on Twitter, and 26,000 on Facebook. On a normal day, Ogola says, his posts and reposts reach 5 million people.

Since the Westgate attack, he says, they've gone viral, reaching 50 million, around the globe.