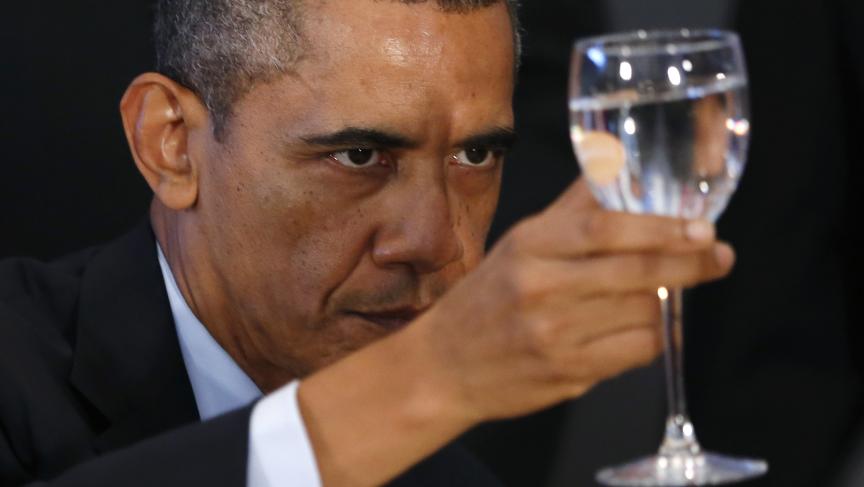 US President Barack Obama raises his glass for a toast during a luncheon at the United Nations General Assembly in New York Sept. 24, 2013.

Eyeing what could be an historic diplomatic opening, President Barack Obama used his address to the United Nations General Assembly today to move a step closer to discussions with the new Iranian government.

President Obama said he’d dispatched Secretary of State John Kerry to meet with Iran’s foreign minister later this week for what will be the highest-level contacts between the United States and Iran in years.

In many ways the UN speech broke new ground, argued David Rohde, a columnist with Reuters.

Rohde said President Obama “moved away from the Israelis a bit. He talked about respecting the right of Iranian people who want to pursue peaceful nuclear power. The Israelis have pushed a harder line, some Israelis are for all nuclear power to be stripped away from Iran. So he was trying to make a diplomatic push, but not go too far at the same time. The cautious Obama, as always.”

But difficulties will arise if and when President Obama attempts to ease sanctions on Iran, according to Rohde. That's when domestic politics step in.

“These are Congressionally mandated sanctions. It will require a vote in Congress to ease these sanctions. And already he’s being attacked by Democrats and Republicans saying we can’t ease the sanctions until there’s a really comprehensive, verifiable agreement … So he’s really going to have to pull a very detailed agreement out of a hat here, or he’s going to have a very hard time getting Congress to move.”

President Obama, Rohde argued, is hoping that a breakthrough with Iran on its nuclear program could lead to Iranian cooperation in Syria.

“In a best case scenario, both Russia and Iran pressure Assad to step aside . . . and you have a diplomatic solution,” Rohde says. “But these are huge steps, and just getting this agreement to be carried out in terms of chemical weapons is a big question.”