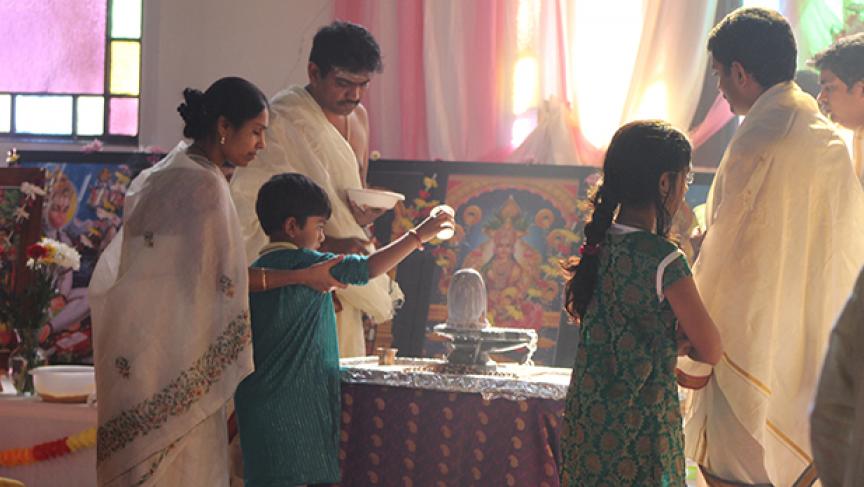 A Hindu American family in Maine participates in Abhishek for Lord Shiva during the festival of Shivratri in March.

Except for the sign outside, you wouldn’t likely suspect that the old Universalist church in a suburb of Portland, Maine, is now a Hindu temple.  It still has that classic New England church look, with its white wooden clapboards.  But step inside, and see a space recently transformed by colorful streamers and garlands, portraits of Hindu gods and music.

I recently visited the temple on the last day of a week-long celebration honoring Lord Ganesha, a Hindu deity. Deven Bhatt, the president of the temple, says it's a fitting festival for the community. “Lord Ganesha is considered a remover of obstacles, and God knows, we have had so many obstacles in our way,” Bhatt says.

It’s because Maine’s Hindu population is not that big; there are only estimates of its size, from several hundred familes, to a couple thousand Hindus.  But it’s growing and, now, Bhatt says, the community’s finally managed to establish its first public temple. “If you are in a bigger city there is power in numbers,” he says.  “Here, because of the small community, the affordability, like how do you buy and do that. So for one or the other reason it has taken this long time for people to come together and finally make it happen.”

It used to be that Hindus in Maine would drive hours out of state to go to temple.  Or they would hold celebrations in their homes. It was clear that a communal space in Maine was needed. So, last December, when members spotted the old, vacant Universalist church, they snapped it up. Bhatt says the place felt right. “It’s very peaceful, the vibrations, I believe, of the place that's been a place of worship for 100-plus years,” he says.

To buy the church, the community needed to raise an extra $40,000. They collected  that cash in just ten days.  Now, volunteers oversee the temple.

On a recent afternoon, I meet with Nagina Sawant. She rolls out sitting mats in front of an altar for Lord Ganesha.  Though she is a busy mom and doesn’t drive, she finds rides or takes a bus to temple to clean and prepare for festivals. “We wanted a place to worship. We wanted a place where our children can all come together, enhance their knowledge … because otherwise we had to go all the way to Massachusetts to visit Gods and to pray and to worship and to enjoy festivals,” Sawant says.

So now, Maine offers a space to worship, on top of what already draws many Hindus to the state: good jobs and quality of life.  Krishan Verma came to Maine 25 years ago for college, became a psychiatrist and never left.  He and his wife Rashmi remember when they only had a few Hindu friends here. “Community was very small, 25 people, hardly,” says Verma.

“And now we are a big, huge community, compared to what we used to have,” says Verma’s wife, Rashmi.

Temple president Deven Bhatt came to Maine for a tech job, like many other Indians after the dot-com boom.  Though he has only been in Maine for a couple years, he has lived in the US for nearly 30.  He says that being part of the smaller, tight-knit Hindu community here has actually allowed him to rediscover his cultural identity. “I have done more khirtans and chanting here in three-and-a-half years than I ever did in my entire life,” says Bhatt.

He says he hopes the new Maine Hindu Temple, as it’s called, will foster further growth in the local Hindu community. They’ve already opened their doors to other faiths and curious passersby.

“We had a few people walk in and say, ‘Hey, I saw the sign, and I didn’t know that this place existed here.  And I know about this and I practice this, can I come?’  And, it just gives me so much joy,” Bhatt says.

He tells me that he once feared losing his Hindu culture in the US. Now, he says, he's not afraid of that anymore.