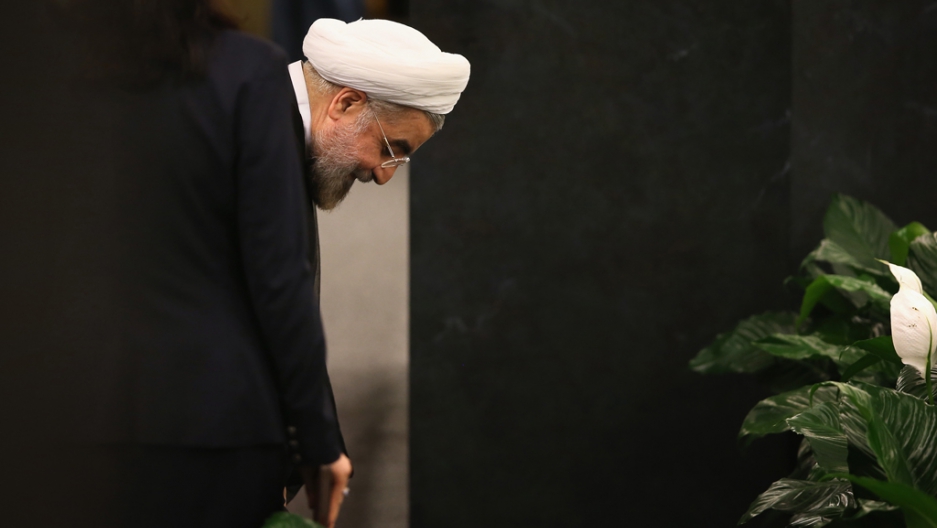 President Hassan Rouhani called for a world against violence and extremism Tuesday while insisting Iran is willing to enter nuclear talks during his first address to the United Nations General Assembly.

The man who many believe will bring Iran into a more approachable middle ground also said his nation deserves to be treated as an equal by the international community.

Rouhani also said he expects a “consistent voice” from Washington.

“This is a unique opportunity,” he said, according the Guardian. “The Islamic Republic of Iran believes that all challenges can be met successfully.”

However, Rouhani said Iran will only talk about its nuclear programs if it receives certain guarantees, including the ability to enrich uranium in the country.

He also said weapons have no place in any nuclear program, and called Iran a "harbinger of just peace."

Thomas Erdbrink, who has reported the last decade from inside Iran for The New York Times, said Rouhani wants concessions from the United States on issues that divide the two countries.

First take: Iran does not pose any threat to the world, wants to see a first step by Obama and country continues its resistance policies.

International observers are framing Rouhani’s election victory in June as proof the Islamic Republic is leaving behind the extremist views of his predecessor, Mahmoud Ahmadinejad.

It wasn’t uncommon for delegates to leave the UNGA during Ahmadinejad’s speeches.

Now, Rouhani’s remarks were considered the highlight of the assembly.

“As the economy worsened in Ahmadinejad’s second term, and factionalism spread among the regime’s inner circles, it became evident to the state’s political elite that they could not risk continuing down the same path,” the Guardian’s Narges Bajoghli wrote before the speech.

More from GlobalPost: UN must address Syria food shortages, Save the Children says

However, as excited as everyone was to hear him speak, there are those equally underwhelmed now that it's over.

Some suggest the English translation hurt, while others commented that it was purely a political speech in response to earlier remarks by President Barack Obama.

The two nations have long squabbled over Iran's pursuit of nuclear power, with the US and ally Israel leading the charge that it's to build weapons. Iran suggests the nuclear program is for power and medical research.

Journalist in #Tehran: Was a completely political speech in response to Obama. No passion or emotions, mere politics. #RouhaniUNGA

While face-to-face meetings with Obama proved “too complicated” to arrange on Tuesday, the nations have scheduled talks this week, BBC reported.

During his speech, Obama told the General Assembly the US wants a better relationship with Iran.

“I don’t believe this difficult history can be overcome overnight — the suspicion runs too deep,” Obama said, according to Agence France-Presse. “But I do believe that if we can resolve the issue of Iran’s nuclear program, that can serve as a major step down a long road towards a different relationship — one based on mutual interests and mutual respect.”

The US severed diplomatic ties with Iran in 1980 following the Islamic Revolution. The full text of Rouhani's speech follows below.

More from GlobalPost: For Iran, timing of Obama-Rouhani meeting ‘too complicated’