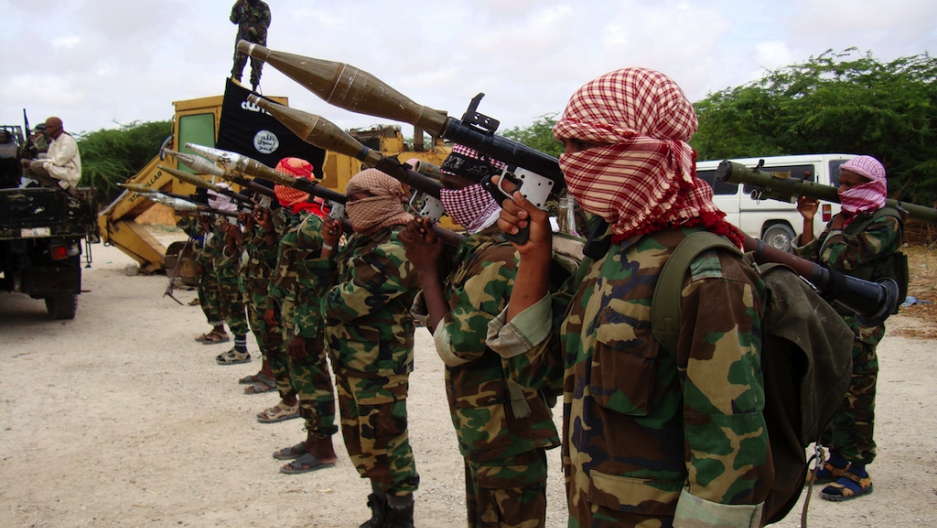 NAIROBI, Kenya — The siege at Nairobi’s Westgate Mall entered its fourth day Tuesday, despite assurances from the Kenyan government that it was “in control” of the four-story shopping complex.

Throughout the day today, sporadic explosions and gunshots could be heard — and there are reports that as many as three militants were still holed up inside.

Workers at Nairobi’s main morgue were preparing to receive many more bodies retrieved from inside the mall as the military operation to end the siege continued, according to the Associated Press.

Little is known about the gunmen so far, but the Somalia-based, Al Qaeda-linked Al Shabaab claimed responsibility for the attack in which at least 62 have been killed.

Speaking to PBS NewsHour Monday, Kenyan Foreign Minister Amina Mohamed said there were “two or three Americans” and a British woman among the 10-15 assailants. Kenyan authorities said six of the attackers had been killed.

The brazen assault — which is the worst terrorist incident in Kenya since the 1998 US Embassy bombing — suggests Al Shabaab is no longer on the back foot, and raised questions about Kenya’s ability to defend itself against Islamist militants.

Kenya contributes roughly 4,000 troops to the African Union peacekeeping mission in Somalia, and Al Shabaab spokesmen have referenced their presence in Somalia as the reason for the attack.

“The attack is a clear statement of intent [to carry out an international attack] and capacity,” said Cedric Barnes, Nairobi-based Horn of Africa director at the International Crisis Group think tank in Brussels.

Somalia’s government, which struggles to control the capital Mogadishu, insists the group is defeated following a push from peacekeepers, including the Kenyan troops, to rout Al Shabaab from certain strongholds.

At various times since 2006, the group has ruled over large swathes of the country.

But “this weekend’s attack on the Westgate Mall is an example of the deadly toll exacted by premature proclamations of ‘victory’, which result in the failure to devote adequate resources to actually truly finishing the task, to say nothing of letting one’s guard down,” J. Peter Pham, director of the Africa Center at the New York-based Atlantic Council, said in an email.

Pham said the group’s capacity may be diminished, but they are not defeated. A United Nations report published in July described Al Shabaab as “arguably intact in terms of operational readiness, chain of command, discipline and communication capabilities” despite recent military setbacks.

Al Shabaab emerged in 2006 as the armed wing of the Islamic Courts Union, a grassroots organization aimed at establishing Sharia law. The ICU ruled Somalia for just a few months until US-backed troops from neighboring Ethiopia chased the group out.

Born in the breakaway region of Somaliland in 1977, Godane fought against Russian troops in Afghanistan and assumed his position as Al Shabaab leader in 2008. His predecessor was killed in a US air strike.

Godane strengthened Al Shabaab’s ties with Al Qaeda, pledging allegiance to the transnational terrorist outfit in 2012, the same year the US placed a $7 million bounty on his head.

“Godane has planned and maneuvered to have Shabaab directly linked to Al Qaeda and this is the result, with tragic consequences,” said Barnes.

Having lost the conventional war against a force of more than 17,000 African Union troops in Somalia, Al Shabaab moved to launch a string of complex, asymmetric attacks in Mogadishu this year. Militants wielding guns and wearing suicide vests targeted the Supreme Court, a UN compound and popular restaurants in the capital, killing scores.

The attack on the Westgate Mall is more ambitious in scope and shows reach and capacity Al Shabaab had not yet demonstrated.

“With this attack, he has elevated himself and Shabaab into much closer alignment with Al Qaeda,” Barnes said of Al Shabaab leader Godane. “This is a seminal moment, Nairobi’s 9/11.”

By using small squads of gunmen rather than suicide bombers — which Al Shabaab deployed in both Somalia and Uganda in recent years — the assault was much more dangerous, says Nairobi-based Somalia expert Matt Bryden.

Using squads of gunmen rather than suicide bombers, who have been deployed in Somalia and Uganda in recent years, made the attack more dangerous, according to Bryden, who directs the Sahan Research think tank in Nairobi and formerly coordinated the United Nations' monitoring group on Somalia.

“They’ve let go of this suicide bombing cult and that gives them more freedom of action and makes them more likely to succeed, in their terms,” he said. “This is a natural evolution for them.”

Pham warned that the attack “is probably just the first of what is likely to be several from Shabaab now that it has transitioned from a guerrilla force into a full-fledge terrorist outfit.”

Although the group claimed responsibility, some analysts suspect its Kenyan affiliate, Al Hijra, of playing a key role in pre-planning the operation.

Al Hijra actively seeks recruits for Al Shabaab in Kenya and is believed to have successfully enlisted hundreds of Kenyan Muslims to join since 2008.

It has “a pool of fighters to draw upon,” Bryden said, adding that the group had been looking for the opportunity to launch a “spectacular attack.”

Nor could such a complex and well-planned operation be coordinated from abroad, experts say.

“An operation like the one this weekend cannot take place without reconnaissance and careful planning, both of which require a presence on the ground for an extended period,” Pham said.

Although an assault with grenades and assault rifles on a soft target such as a shopping mall is almost impossible to stop once it is underway, Bryden said it was clear there had been “a major intelligence failure” on the part of Kenyan and Western intelligence agents in not detecting the plot in advance.

The onus now will be on Kenya’s government to respond to the overt terrorist threat without alienating large parts of an already-divided population. Six per cent of Kenyans are ethnic Somalis, according to a 2009 census, and more than one in ten is Muslim.

“It will be a challenge to maintain the necessary vigilance and security while not being seen to harass particular communities,” Barnes said. “President Uhuru Kenyatta is faced with some very difficult decisions.”

This article has been corrected from a previous version that stated Matt Bryden ran an NGO called the Sahan Research and Development Organization. He is the director of Sahan Research, an unaffiliated think tank.