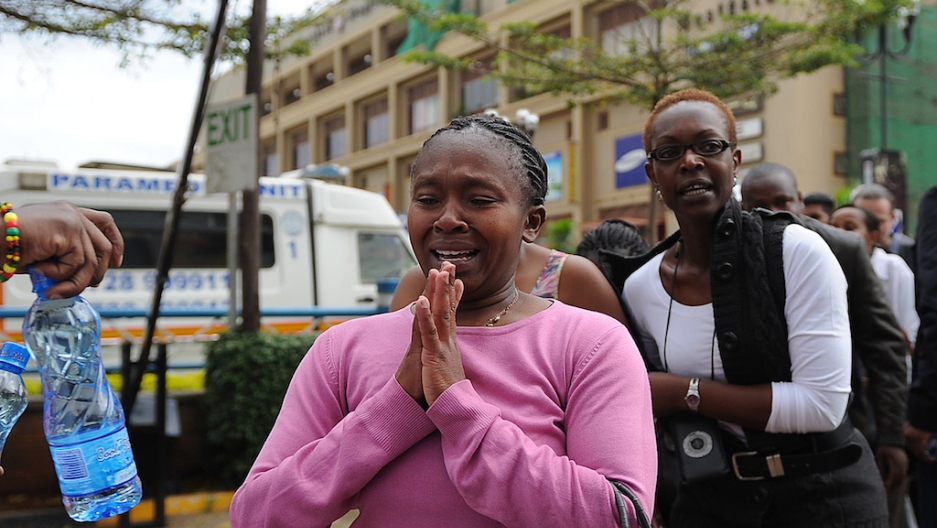 A woman who had been held hostage reacts following a security operation at an upmarket shopping mall, where suspected terrorists engaged Kenyan security forces in a drawn out gun fight on September 21, 2013 in Nairobi.
Credit: TONY KARUMBA
Share

NAIROBI, Kenya — Satpal Singh, a Kenyan man of Indian descent, was enjoying a cup of coffee with friends at the Java Coffee House on the mall’s upper floor when the terror began.

Somalia’s Al Shabaab movement, aligned with Al Qaeda, has claimed responsibility for the ongoing attack at the Westgate Mall in Nairobi that has already killed at least 62 people.

“I heard explosions and then shooting,” Singh said.

Knowing that the mall was full of families and children, Singh said he began looking for ways to get people out. He rushed downstairs toward the shooting. On one floor he found a police officer with an assault rifle hiding behind a pillar.

“To our dismay, the uniformed officers did not assist us,” he said. “Civilians risked their lives to help people, but one officer we found was just crouching behind a pillar holding his gun.”

“He had a weapon and would not use it,” he said.

On the ground floor, Singh saw two dead bodies. When one of the militants — authorities believe there are 10 to 15 of them inside the mall — fired in his direction, Singh ran back upstairs and tried to get people safely onto the mall’s roof using the fire escape at the cinema.

Once on the roof, Singh peered over the edge of the building, but was shot at again — this time by a Kenyan police officer who, Singh assumes, mistook him for a terrorist.

Singh and other shoppers caught in the chaos found yet another safe fire exit and began helping people down the stairs to the basement, and out through a service exit.

“We carried [injured] people on our shoulders,” he said. “We were let down by the police.”

Kenyan authorities said Monday that 1,000 people escaped the mall after the attackers first opened fire, but the operation to end the siege was not yet over. Three fighters were killed since Saturday, officials said, but the remaining militants reportedly hold an unknown number of hostages inside the mall.

Kenyan Interior Minister Joseph Ole Lenku said that “almost all the hostages have been evacuated,” but declined to give a specific number.

Lenku said that the Kenyan army was “in full control of the situation,” even as sporadic gunfire rang out during the course of the afternoon Monday.

“Terrorists could be running and hiding in some of the stores,” he said.

Architect Naeem Bivji, 34, was sitting on the roadside terrace at the Art Caffe restaurant with his wife and 7-month-old baby when the assault began around lunchtime Saturday.

“The attack started with a huge bang,” he said. “We could feel the blast wave and dived to the ground. A man a couple of tables away, a big guy, a bit older and a little slow to move was shot in the chest right in front of us.”

Hiding beneath the restaurant tables, the terrified customers tried to make sense of what was happening around them, Bivji said.

“People were saying it might be a drive-by or a robbery but we thought it was something more,” he said. “We waited on the ground for a few seconds then, as the shooting got louder inside the building, we crawled into the corner where there was a little stairwell and a fire escape.”

For the next 40 minutes, Bivji and his wife and young child huddled together, waiting for a chance to dash for safety.

Then, during a lull in the shooting, Bivji and his wife, clutching their infant daughter, clambered off the terrace and escaped.

Bivji said his brother was trapped in a bank on an upper floor of the mall for six hours. Customers had locked the bank’s doors, then separated the men from the women and the children. The men stayed out front, while the others hid behind the bulletproof glass of the teller counters.

Another man, a former Irish soldier, said he narrowly escaped death after militants shot at him while he was driving his car down the mall’s exit ramp.

“I heard gunshots and got out of my car and ducked down,” said the man, who did not want to be named. “When I looked up, I saw a Somali guy with a gun who shot in my direction.”

He left his keys in the car and ran back up the ramp to the car park. Families who had been hosting a children’s cooking competition were gathered in a far corner of the garage, hiding.

“They were executing people,” he said. “One shot at a time.”

Other survivors described how the militants separated the civilians: Muslims from non-Muslims. They then executed the non-Muslims.

For the next four hours the man kept his face pressed to the concrete as he counted at least 60 individual shots. Later, a plainclothes man assisting security forces found and rescued him.