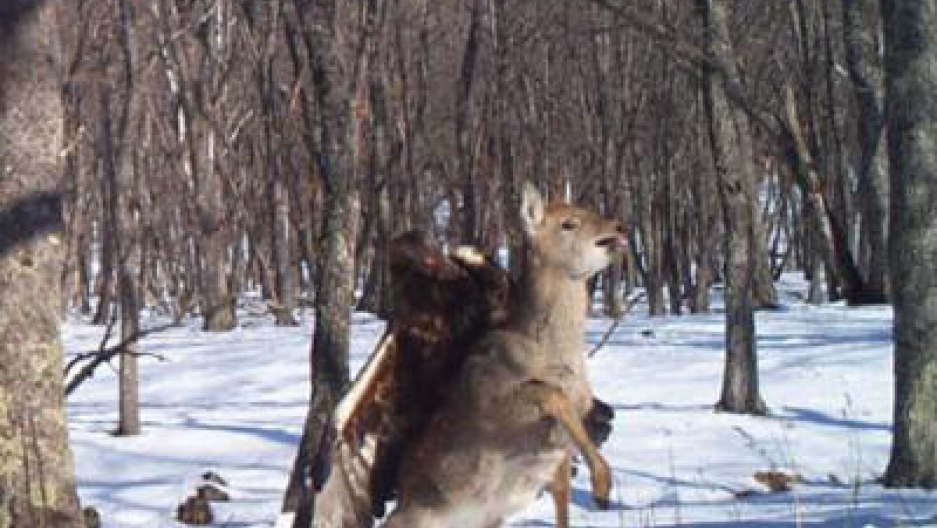 A camera trap set to photograph Siberian tigers instead captured the first ever shot of a giant eagle taking down a deer.

The set of three images captures the golden eagle latched onto the small deer's back, bringing it down into the snow.

The deer carcass was found two weeks later near the camera trap.

Linda Kerley of the Zoological Society of London (ZSL) found the photos during an equipment check.

"It's the first time I've seen anything like it," Linda Kerley of ZSL, who runs the camera trap project.

More from GlobalPost: Federal biologists tally eagle deaths at US wind farms, say number likely to be much higher

"It's rare for golden eagles to snatch up deer. I've been assessing deer causes of death in Russia for 18 years — this is the first time I've seen anything like this."

Golden eagles are known to make daring attacks on large prey from deers to birds, but tend to prefer small mammals.

They are extremely large birds with a wingspan of between 5 feet 11 inches to 7 feet 8 inches.

The ZSL has been in Russia's far east monitoring tiger populations for six years.

The findings were published in the Journal of Raptor Research (no, not the ones from Jurassic Park).