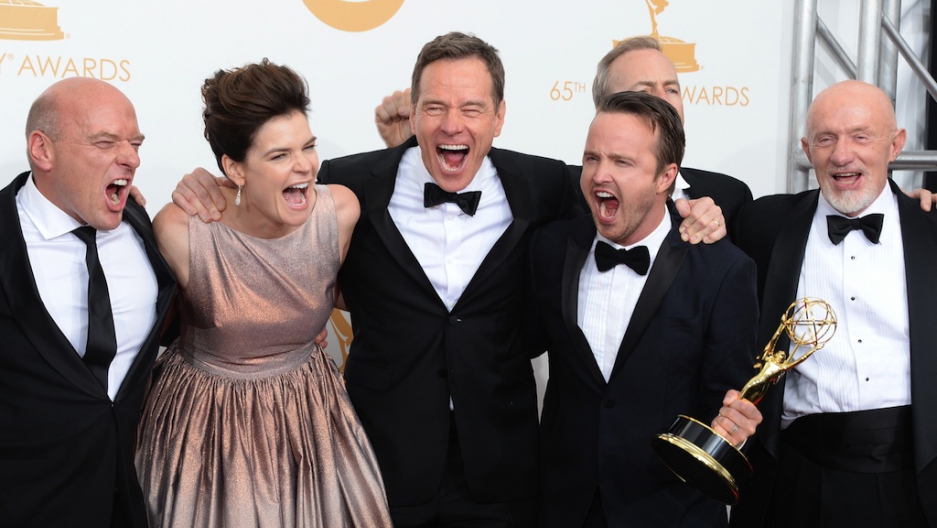 LOS ANGELES — Host Neil Patrick Harris joked onstage that nobody in America would be winning their Emmy office pool and he's probably right.

The biggest shocker of the night was Jeff Daniels' win for best actor in a drama for HBO's "The Newsroom".

"I usually don’t win anything," Daniels admitted. He said his last prize was a "best actor over 50" award from the AARP, an association for retired people, for 2005 film "The Squid and the Whale."

"We’ll have to move the golden Barcalounger that the AARP gave me," Daniels joked.

Claire Danes picked up the Emmy for best actress for her role in Showtime's "Homeland", sweeping away any hopes for "Scandal" star Kerry Washington to be the first African American to win the category since Cicely Tyson in 1995.

HBO continued its winning streak with another upset —this time it was Bobby Cannavale from "Boardwalk Empire," walking away with an Emmy for best supporting actor. Cannavale beat two-time Emmy winner Aaron Paul from "Breaking Bad" and "Homeland" star Mandy Patinkin.

Don't feel too bad for "Breaking Bad", the show won the biggest honor of the night with an Emmy for best drama series.

"Holy crap," executive producer Vince Gilligan said. "I did not see this coming. I thought this was gonna be ‘House of Cards,’ or it could have been ‘Homeland,’ or ‘Mad Men,’ or ‘Downton Abbey’ or ‘Game of Thrones’ or any number of other shows that could have been nominated."

And "Breaking Bad"'s Anna Gunn, who plays the woman everyone loves to hate, bumped two-time Emmy winner Maggie Smith of "Downton Abbey" to win the award for the best supporting actress in a drama.

The surprises didn't end with the dramas.

When it came to the comedy awards — women swept both the writing and directing categories for the first time in history.

She is only the second woman in history to win the Emmy for best comedy directing after Betty Thomas two decades ago.

Tina Fey, the creator/executive producer of 30 Rock, won an Emmy with writer Tracey Wigfield for best writing on the series finale.

And we can't leave out Stephen Colbert who finally got the better of Jon Stewart and ended "The Daily Show"'s ten-year winning streak.

"As I said before, it’s an honor to just to be nominated," Colbert said. "But what’s more, it’s also a lie. This is way better."