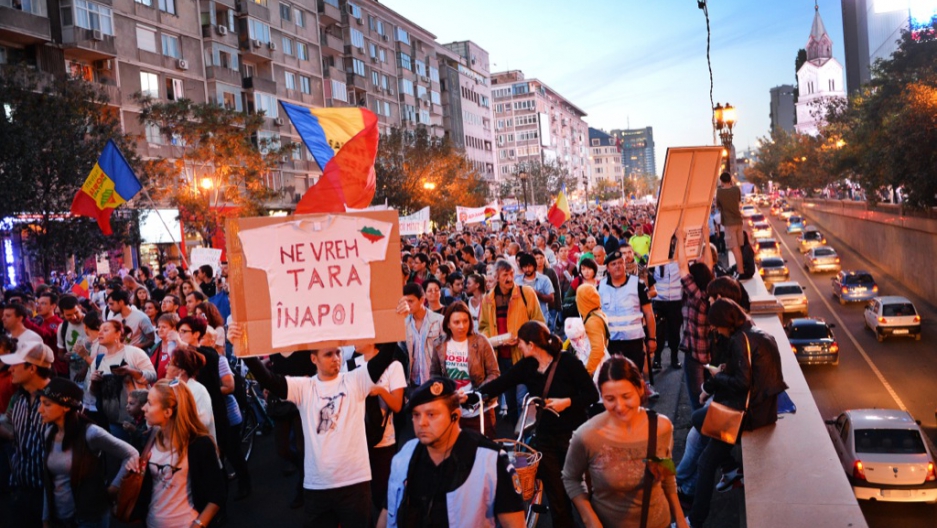 Protesters march on Sept. 15, 2013 during the fifteenth day of demonstrations in Bucharest, Romania against the Rosia Montana Gold Corporation (RMGC). Thousands of young Romanians have taken to the streets in protest against plans, supported by the government, for Europe's biggest open-cast gold mine, a civic movement unprecedented since the 1990s.
Credit: DANIEL MIHAILESCU
Share

BUCHAREST, Romania — Some 15,000 people filled the streets of Bucharest in recent days to protest a draft law passed by the government designed to approve Europe's largest gold mining project in Rosia Montana, a small town in northern Romania.

The huge mobilization came after two weeks of continued protests against what some have called a defiance of constitutional and environmental norms in favor of the Canadian-owned Rosia Montana Gold Corporation.

Protesters came from several Romanian cities and major capitals around the world. They demonstrated not only against the mining project, but also against the ruling class and the Romanian political system.

They contend that the mine's liberal use of cyanide and heavy metals such as mercury will create a major environmental risk. Protesters also accused authorities of trying to sell off Romania’s assets too cheaply.

The rally, one of the biggest since the early ‘90s, signaled a civil society awakening and demanding that its voice be heard.

However, not everyone agrees. Hundreds also gathered in Rosia Montana to support the mine's development, arguing that the plan would create jobs and alleviate widespread poverty in the area.

Local miners blockaded themselves 300 meters below ground and threatened to go on a hunger strike over fears jobs would be lost if plans for the gold mine do not go ahead.

President Traian Basescu, like many analysts, considers the law unconstitutional. But the Constitutional Court has not given its verdict on this question.

Prime Minister Victor Ponta finally met with the strikers and persuaded them to end their protest, promising he would send a parliamentary committee to the area.

The exploration project intends to extract approximately 300 tons of gold and 1,600 tons of silver by excavating four mountain peaks. It has been held up since 1997, waiting to receive an environmental permit.

Activists see the draft law as a threat to fundamental rights set forth in the Romanian judicial system. For example, the draft law would permit forced expropriation of land, which would violate the individual right to property.

Additionally, natural monuments would no longer be protected.

The project proposed by the Canadian company would entail the destruction of about 95 percent of the archeological site. For instance, of the 7-km-long Roman mine galleries — unique in the world both in terms of their size and preservation — only 300 meters would remain.

The Canadians are planning an opencast gold mine. To collect the ore, the entire mountain would be blown up, bit by bit. The rock would then be taken to a mining plant to be leached with cyanide and separated into gold on one side, cyanide and tailings on the other.

The mine would use as much as 12,000 tons of cyanide annually over an exploration period of up to 16 years, according to Gabriel Resources. The cyanide would be stored in a 300-hectare pond in the Corna Valley, behind a dam 185 meters high.

According to one protester, “Romania would have the largest cyanide lake in the world.”

The Rosia Montana Gold Corporation has only agreed to fund an environmental warrantee for the project on a year-by-year basis. If a major accident were to happen, it probably would not be completely covered.

Environment Minister Rovana Plumb, explained that the Canadian company will pay $146 million dollars a year over the 16-year life of the project, plus an extra $25 million warrantee for environmental disasters. The company will make the first payment when the project starts, and the rest will be paid from proceeds generated by the exploration.

If the company goes bankrupt or the dam collapses or there are leakages, the state can only use the money paid by the company up to that time. It is not certain there would be enough money in the fund to cover the costs of, for example, a massive cyanide spill.

Critics argue that if the full environmental warrantee were paid at the beginning of the project, there would bre a pool of money large enough to cover the worst-case scenario.

The company would get the money back when the exploration is complete, if it carries out rehabilitation work properly.

These concerns are being weighed against the 3,000 jobs the company says it would create and the income that would flow from the project to the national budget.

Under the proposed agreement, the Romanian state would receive a 6 percent royalty on the gold extracted. Although the contract has not been made public, the total revenue for the state could be as much as 1.8 billion euros in dividends, royalties and taxes, according to the Rosia Montana Gold Corporation.

But framing the issue as a choice between jobs and the environment is a false dilemma, according to a study by the Romanian Academy. The real choice is between short-term gain and long-term sustainable economic development.

Compared to the potential risks and costs of the project, 1.8 billion euros could be insignificant over a 16-year period.

“We are not against capitalizing on Romania’s natural resources, but this has to be done smartly, in the interest of the country and by observing sustainable development conditions,” said Romanian Academy President Ionel Haiduc.

Political parties have signaled that the project will be voted down.

If that occurs, the Canadian company, Gabriel Resources, majority owner of the Rosia Montana Gold Corporation, might sue the Romanian state.

Meanwhile, the Romanian public is in the dark. The rights and obligations of the state spelled out in the contract have not been disclosed to the public. Details of the exploration rights licensed to the Canadian company also are not known to the public.

The special parliamentary committee has been set up to debate the proposed mining project and issue a report by Oct. 20. A vote in both chambers of the Romanian parliament will follow.

The largest group of protesters is determined to continue demonstrations against the project, until the law is voted down and cyanide is completely banned from mining in Romania.

Cristina Buzasu is a political economist and has worked as a policy adviser for the European Parliament. She has contributed articles to several think tanks and the Romanian press.