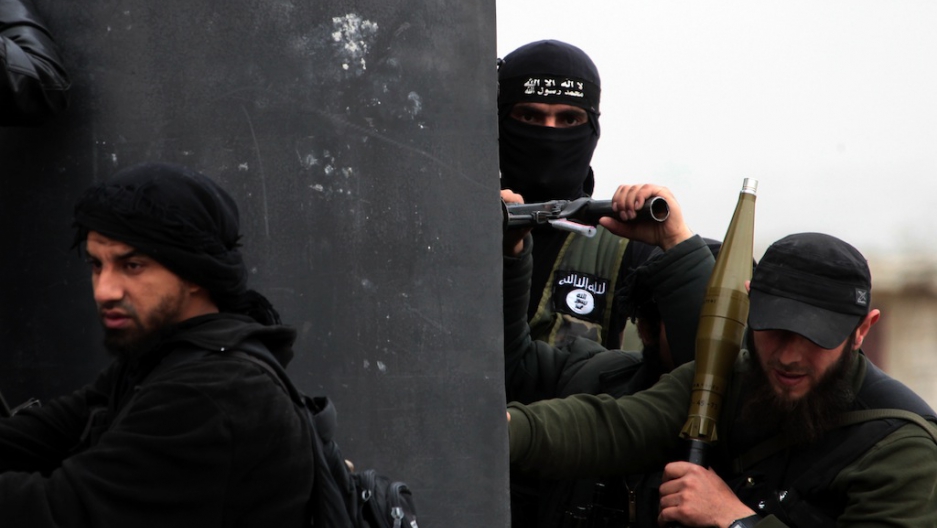 A Turkish fighter of the jihadist group Al-Nusra Front, bearing the flag of Al-Qaeda on his jacket (C-back), holds position with fellow comrades on April 4, 2013 in the Syrian village of Aziza.
Credit: Guillaume Briquet
Share

There's a sexual jihad in Syria.

At least, if you ask Tunisia's interior minister.

"They have sexual relations with 20, 30, 100" militants while in Syria, Ben Jeddou told members of the National Constituent Assembly, according to Agence France-Presse.

"After the sexual liaisons they have there in the name of 'jihad al-nikah' — (sexual holy war, in Arabic) — they come home pregnant," he added.

Semi-official Iranian news agency Fars explained that for some, jihad al-nikah allows for multiple sexual extramarital affairs, and sanctions women sleeping with more than one man per day as part of a temporary contract. It's supposed to be good for morale.

The Iranian news outlet reported such exploitation of women in August:

"The sexual jihad fatwa made its first appearance in Syria a few months ago and it allowed for armed members to have sexual intercourse with women for a determined period of time as per a momentary contract that loses effect after a few hours."

In December, Sheikh Mohammed al-Arifi, a Wahhabi cleric in Saudi Arabia, announced a religious decree that allowed for these types of “intercourse marriages" with "Syrian females as young as 14 years old,” Iran's state-run Press TV reported last year. However, according to CNS News, al-Arifi later retracted the fatwa.

In April, the former Mufti of Tunisia, Sheikh Othman Battikh, reportedly said 13 Tunisian girls had been "fooled," traveled into Syria, and offered themselves to rebel fighters.

“For jihad in Syria, they are now pushing girls to go there. Thirteen young girls have been sent for sexual jihad. What is this? This is called prostitution. It is moral educational corruption,” Battikh was quoted as saying.

Ben Jeddou also said Thursday that some 6,000 Tunisians have been barred from traveling to Syria since March 2013, and 86 people have been arrested on suspicion of forming "networks" helping Tunisians enter Syria to join the fight.

Though those claims are unconfirmed, it is widely known that Syria's civil war has entangled the young men of many countries in the region, including Lebanon.