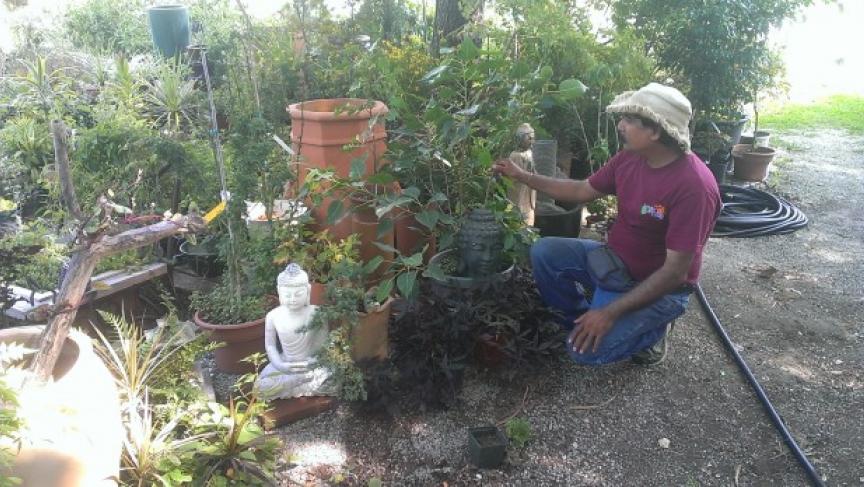 Anil Gandhi came from Mumbai back in 1989, lured by family and good jobs. Now he makes a living selling the plants of his native India. (Photo: Jessica Jones)

When South Asian immigrants to this country get homesick, they can probably locate an Indian restaurant or grocery store to remind them of home. But one Indian immigrant has found another way to deal with the longing for home. And he’s turned it into a thriving business.

Anil Gandhi moved to North Carolina in 1989, lured by family and good jobs in the telecom industry. But today he makes a living selling the plants of his native India.

As a sprinkler shoots water over exotic-looking greenery, Gandhi strolls over to a small shrine, where leafy herb called Tulsi spills over the top.

“In India, most of the Hindu families they have this in their backyard,” Gandhi says. “They put Tulsi in this and it grows full season. The ladies come in the morning and they bring the holy water and they take a circle and they pray to the goddess Tulsi.”

The Tulsi plant–also known as holy basil–is one of the most popular items for sale at Gandhi’s nursery, Vedic Gardens. He opened it three years ago in the town of Morrisville after realizing there was a demand in the South Asian community here for plants from back home.

“Now it’s come to a point where it’s getting so popular that every single day I have customers calling from out of state asking me to ship plants, whether it’s a bodhi tree or holy basil or a curry leaf plant.”

As far as Gandhi knows, his business is the only plant nursery in the country catering to South Asians. He got started in the landscaping business 12 years ago, after he was laid off from his telecom job. He’d always loved gardening, so after much thought he decided to start his own landscaping business for the area’s growing South Asian community.

“So I went to do the landscaping and they would ask, can we put a mango tree in our yard, can we put a tamarind here, can we put a banana here, so that prompted me to research more deeply into plants.”

Gandhi began collecting all the plants he needed from online stores and nurseries so his customers could find everything they wanted in one place. Today, they can find everything from spiky turmeric plants to several varieties of jasmine from India and the Middle East. Gandhi propagates most things himself, from seeds he finds on Ebay and in stores. Many of his subtropical plants need to be brought inside during the winter, but that doesn’t deter customers.

On any given day at Vedic Gardens, you’ll find people wandering through Gandhi’s collection of plants with smiles on their faces. Sudharsan Narva, who moved here from Connecticut a few years ago, says there’s one thing he always notices when he visits the nursery.

“The smell, first thing. I correlate myself with what I used to be long time ago when I was in India, the smell of the tree, the smell of the flowers. So it feels like home,” Narva says. “It makes me really happy.”

A few steps away, Sunita Prabu is examining a cluster of graceful curry leaf plants that will eventually grow into small trees. Prabu says it’s important to have a good supply of fresh curry leaves for her Indian home cooking.

“If you take the leaves out of the tree fresh, it smells very good, rather than buying it from store,” she says. “So we thought of like keeping one in our balcony so that we can get fresh leaves whenever we want to cook.”

Many of Gandhi’s employees were born and raised here in the US and didn’t know much about Indian culture before. But they’re learning. The nursery’s is a town where 20-percent of population is originally from South Asia.

Native North Carolinian Amanda Hayter, who is watering a row of holy basil plants, says she’s happy to be part of this growing business.

“It’s definitely working. I mean, you have to think about the area that you’re in and who you’re selling to and be definitely diverse and open to new things. If you don’t you’re just going to fail miserably.”

As for Anil Gandhi, he says he never could have imagined as a boy in Mumbai that he would end up running an Indian plant nursery in far-off North Carolina.

“This is the country that gives you opportunity to do whatever you want to do,” he says. “That’s what I’ve learned. Just honesty and hard work can take you way up there, wherever you want to be.”

Gandhi says in opening the nursery, he stumbled across his dream job, and there’s nothing better than growing the familiar plants he loves and sharing them with others.